China's three main airlines are all state-owned but the flagship is Air China, which is based in the capital of Beijing and whose Chinese name confers it the title of international carrier. Air China has been the most internationally-focused of the three, including China Eastern and China Southern. Air China has pursued rapid growth in Europe and the United States before its peers did, partially to reflect the opportunity of its Beijing base to be a hub, but also for Air China to represent the country in overseas markets. Being given commercial preference come with the trade-off of political responsibilities.

Air China faces is maximising its short-term opportunities in Europe and the US, so needs to find new markets. A list of planned new routes for 2015 is only rumoured, and includes long-haul flights to Addis Ababa, Johannesburg and Montreal-Havana. (Auckland has already been announced.) The list is logical and at the very least shows gaps in Air China's network the carrier has spoken of and could be expected to eventually close. The challenge will be in finding a balance between where passengers want to go and where Beijing wants the airline to go.

Air China is the most international of China's major airlines

Air China has the most international RPKs of Chinese airlines. In 2013, the latest full-year for which data is available, Air China Limited (the group) had 41.5 million RPKs. Almost all of that – 40 million – was carried by Air China Company (the airline), reflecting the small international presence of the other airlines like Shenzhen Airlines in the Air China group. 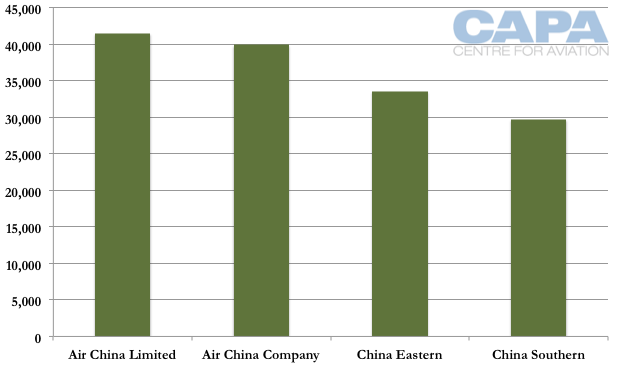 For both Air China the group and the airline international RPKs comprise a higher share of total traffic than at China Eastern or China Southern. 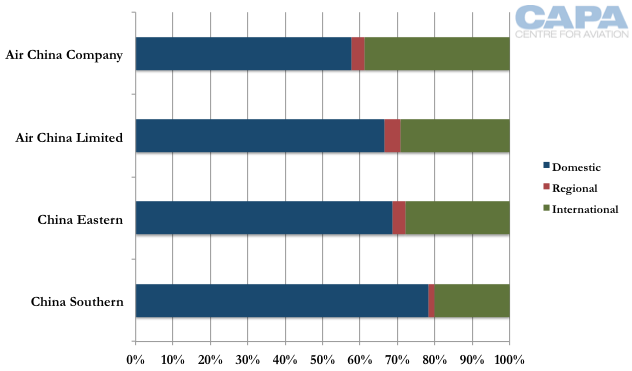 Over half of Air China the airline's international seats in Jan-2015 are within Northeast Asia while Western Europe sees an 18% share and North America 11%. 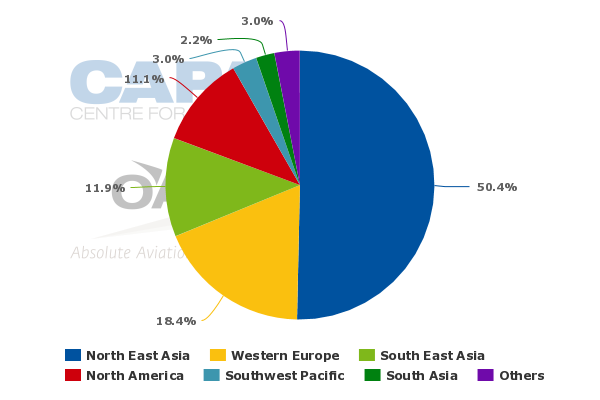 But looking at ASKs, Western Europe has a 35% share and North America 27%. Most of the North American capacity is into the United States. 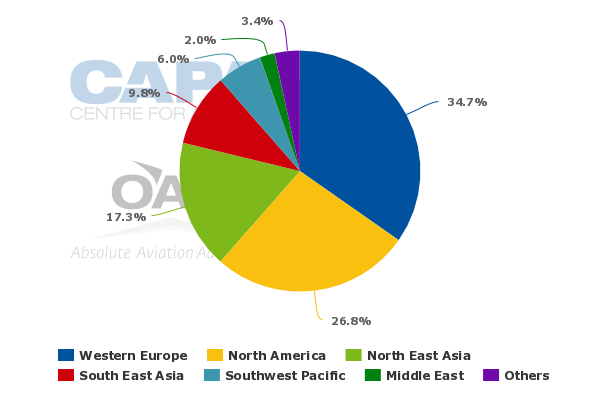 Air China has completed delivery of its 777s on order and now has three 747-8s to be delivered (projected for 2015) with no additional ultra-long-range aircraft until 787-9s arrive in 2016. The -9s are earmarked for service to secondary US cities. The 747-8 deliveries (including the existing four in the fleet) allow for some network changes.

For example, the 747-8 will be used on Beijing-New York JFK, replacing 777-300ERs. A330 deliveries in 2015 could be used on shorter long-haul routes, allowing for further network changes.

Air China projected delivery dates for aircraft on order (purchased from OEMs and leased from lessors): as at 5-Jan-2015 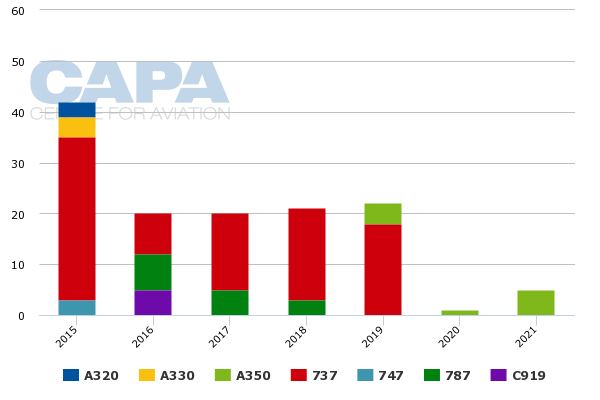 Source: CAPA Fleet Database
Aircraft operated by subsidiaries/associates of the main carrier may be listed separately.
Firm orders include those placed directly by the operator and by lessors assigned to the operator, from 5-Jan-2015 onwards.

Air China will open 13 international routes in 2015, according to a post on Chinese social media, which in the past showed other developments, including China Eastern's new livery, before official announcements. One route, Beijing-Auckland, was already announced while Xinhua confirmed Beijing-Montreal-Havana. There could still be changes. Overall there are few surprises – even the Africa routes have been some time coming.

Only three of the routes are not from Beijing, Air China's hub. These three are to heavy leisure destinations in Japan (Osaka Kansai and Shizuoka) and Korea (Jeju). Japan and Korea are Air China's two largest foreign markets based on seats. Shizuoka is a new destination to the Air China network. There is no existing service to Beijing but other Chinese carriers serve the city. Hakodate in Japan is also a new destination for Air China and would be served from Beijing.

There is no existing service to Beijing but there is to nearby Tianjin. Air China's fifth route to Japan/Korea could be Fukuoka, which Air China serves from Dalian and Shanghai. While these points will mostly see inbound Chinese tourists, they can also see Air China carry outbound Japanese sixth freedom traffic, a strategy of Korean carriers, which serve many Japanese cities.

Korean carriers have an advantage in that their main Seoul hub is closer than Beijing, especially for North American transfer traffic. 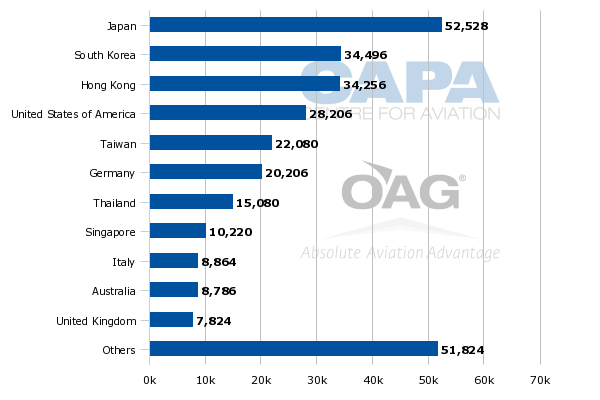 Air China serves Sydney but serves Melbourne via Shanghai with five weekly flights in northern winter 2014/2015. Air China could serve Melbourne from Beijing, the route list suggests, with a daily flight in the Australian summer and four weekly in winter. Air China would be the only carrier on the Melbourne-Beijing flight.

Air China has already announced Auckland as part of a proposed joint-venture with Air New Zealand. Air New Zealand withdrew from Beijing-Auckland, which would make Air China the only operator on the route. China Southern operates to Guangzhou and China Eastern to Shanghai.

Astana is the new capital of Kazakhstan and sees Beijing service from Air Astana twice weekly. China Southern is the only Chinese carrier in Astana (with three weekly flights to Urumqi). Air China does not serve Almaty, the old capital and current commercial centre, but Hainan Airlines does with twice weekly flights to Beijing. Given Air China's political ties, there is likely greater push for it to serve Astana as it is the capital.

Montreal would be Air China's second Canadian destination after Vancouver. Air China does not able to Toronto as Hainan Airlines secured the right before Air China. Montreal was one of the destinations on Hainan's wishlist of new route for 2015. The CAAC has not yet publicly announced the route right.

Canada is a small play in Air China's book: it has approximately 14,100 weekly seats to the United States but only 2,220 to Canada. Air China has proposed a JV with Air Canada. The Montreal service could be tagged to Havana in Cuba, Air China's first Caribbean destination. This tag, with a relatively long flight length (2,600km) on a large aircraft, would be very costly but there are likely political imperatives as China has a growing role in Cuba. It is not known if Air China would have local pick-up rights on the Montreal-Havana tag, which is unserved. Air Canada and Air Transat offer Havana service from Toronto.

India and China do not have the strongest of economic or political relations and flights between the two countries are (surprisingly for many) very limited. This is expected to change gradually, and Air China's Beijing-Mumbai possible route is one example.

Beijing-Mumbai is unserved by any airline; Air China's existing Indian routes are four weekly flights from Beijing to Delhi and three weekly from Chengdu to Mumbai. 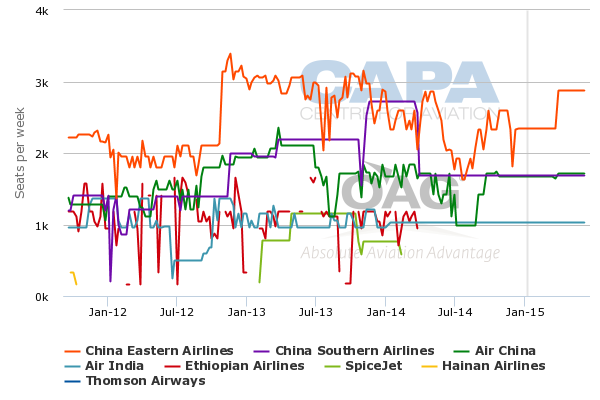 Air China does not serve Kuala Lumpur at all while main competitors China Eastern serves the city from Wuhan, and China Southern from Guangzhou. Chinese airlines are weary of the AirAsia brand of airlines, perceiving them to be more efficient and agile. AirAsia X serves Beijing from Kuala Lumpur, as does Malaysia Airlines. Kuala Lumpur could be a connecting destination for Air China's North American destination. All Nippon Airways plans to add Kuala Lumpur service, partially for North American connections at its Tokyo hub.

Two routes to Africa – Addis Ababa and Johannesburg – would finally give Beijing the African routes it has wanted Chinese airlines to have. The challenge has been the markets will be exceptionally difficult to make work financially. An African destination would see Air China join the small ranks of airlines that serve every inhabited continent.

Part Two of this report will look more closely at Air China's possible new routes to Africa, and opportunities to cooperate with Star Alliance partners Ethiopian Airlines and South African Airways, as well as the decline of other Asian airlines in serving Africa.