It may be two years overdue, but cross-equity partners Air China and Cathay Pacific have made good on their 2006 promise to develop a cargo JV carrier in Shanghai. As cargo markets come out of their two-year trough, the timing is good for the 51:49 Air China-Cathay foray into the Yangtze River Delta market. The carriers finalised their JV agreement yesterday, with the new Pudong-based operation to be named Air China Cargo Co Ltd (ACC).

The naming is important – Cathay is clearly the junior partner. But the Hong Kong-based airline would be grateful of gaining an exposure to Air China’s wealth of Mainland traffic rights, ensuring it is right in the middle of the action as China’s aviation market booms.

But just as Air China has moved to close to 30% ownership of Cathay (straddling two major global alliances in the process), there is a certain gravitational pull away from the traditional hubs towards the next-generation Mainland markets like Shanghai (particularly as markets liberalise and, for example, as cross-Strait relations normalise).

The Air China-Cathay Pudong cargo JV is another step in the diminution of the Hong Kong hub over time, as the Mainland market grows to dominate the region’s aviation market. And Cathay is determined not to remain on the periphery. (Interestingly, Cathay felt compelled to issue a separate press release noting it remains "firmly committed" to the further development of the Hong Kong aviation hub, presumably to soothe any concerns in the local freight community about the increasing focus further north. Cathay confirmed plans to invest "some HKD20 billion" (USD2.5 billion) in new freighters and double its freight capacity within the next five years).

Cathay Pacific Chairman, Christopher Pratt, stated, “we are very excited about this joint venture which further enhances our strong and deepening strategic partnership with Air China", adding, "as a strong home-based cargo airline with a firm foothold in the Yangtze River Delta, ACC will ensure an efficient capture of cargo movements that may otherwise divert to rival hubs in the region. It makes good sense for Cathay Pacific and Air China to team up for this joint venture”.

Air China Chairman, Kong Dong stated, "the restructuring of ACC’s shareholding comprises two major aspects. First, through fleet expansion, we efficiently set the platform for future growth. Secondly, two strong partners team up with complementary strengths to enhance our competitiveness. Given the solid cooperation foundation between Air China and Cathay Pacific, ACC will fully capitalize on both companies’ existing brand strengths and shareholders’ support, to capture business opportunities, maintain leadership position in the market, and contribute to the development of the Beijing and Shanghai aviation hubs”.

The existing Beijing-based Air China cargo operation will develop a base at Shanghai (see full operational details below). Beijing Airport outperformed Pudong in terms of cargo volume growth in 2009, but Pudong is a much larger (and higher potential) market than the capital. 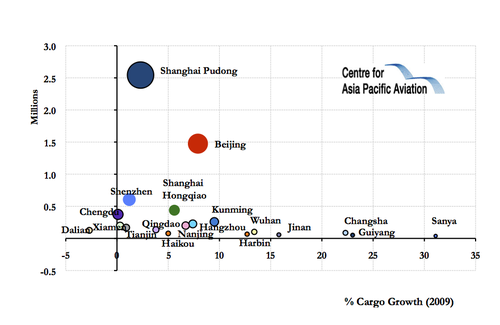 Air China and Cathay Pacific signed a Framework Agreement to establish a jointly owned cargo airline. The two companies will use an existing cargo airline, Air China Cargo Co Ltd (ACC), a wholly owned subsidiary of Air China, as the platform for the JV.

The much-awaited agreement coincides with signs of recovery in the Chinese airfreight market, after a weak 2008, which has provided an impetus to negotiations between the parties. 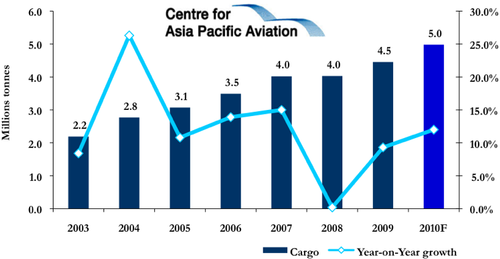 Competition to heat up in Shanghai

The Air China Cathay JV will give Cathay access to hubs in Beijing and Shanghai as overseas demand for auto parts, electronics and apparel recovers from last year’s global recession. The JV will also help Air China better compete with airlines, including FedEx and China Eastern Airlines in Shanghai, the nation’s financial capital and major air hub. UPS established its intra-Asia hub at Pudong in late 2008.

ACC commenced domestic and international operations in 2003 and is now China’s largest all-cargo airline. ACC's current cargo business strength is focused on the Northern China and Yangtze River delta (YRD) while Cathay Pacific's core cargo business is the Pearl River Delta (PRD). These two regions are already two of the world’s largest export-generating manufacturing centres and the airfreight trade lanes to Europe and the USA reflect this fact in their size and historic growth rates.

Key details of the agreement are as follows: