Asia Pacific full-service airlines have seen a pick-up in passenger travel and air cargo demand in 2010, according to Association of Asia Pacific Airlines (AAPA), which commented that Jul-2010 traffic results “provide further evidence of the strength of the recovery in both passenger and freight markets, with volumes surpassing pre-recession levels”.

AAPA added: “Commercial activity has also picked up strongly, leading to a rebound in premium passenger traffic on both regional and long-haul routes.”

Similarly, IATA commented that the Asia Pacific region has become the world’s foremost aviation region and the “worst is over” for the international airline industry. IATA also reported that international scheduled traffic showed “continued strengthening” in Jul-2010, with global passenger traffic now 3% higher than the pre-crisis levels of early 2008, as the industry continues its recovery from the impact of the global financial crisis.

Air China reported a 60% jump in first half net profit in the six months to Jun-2010 to USD675 million, on increased demand in the world’s fastest growing major aviation market, which boosted revenues by 51% to USD5,089 million and a 35% increase in passenger traffic to 26.3 million. It was aided by fuel hedging gains of USD106 million in the period.  Operating costs increased 51.2% in the period to USD4,489 million, with a 74% jump in fuel costs and a 41% labour cost increase.

The Beijing-based carrier’s premium-class sales climbed “significantly,” helping drive a 12% increase in yield in the period. Looking forward, the carrier commented that the outlook remains positive, on strong growth in business and leisure travel in the country.

Shares in the carrier declined 2.2% to CNY11.39 in Shanghai, with declines of 1.8% in Hong Kong trading to HKD8.52 before the earning announcement. The stock has climbed 40% this year, compared with a 51% gain for China Southern Airlines and an increase of 49% for China Eastern Airlines Corp.

Taiwan shares fell the most in three months yesterday, as China Airlines led a decline among carriers after it stated it would reduce fares on some cross-Strait services.  EVA Airways and TransAsia Airways have matched the move, with shares in EVA Airways slumping 6.8% and Air China shares 6.1% weaker. 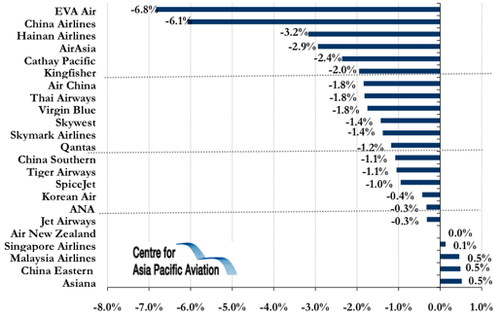 Shares in Air New Zealand remained unchanged on Wednesday, ahead of the carrier reporting a strong rise in full year profit today, on improving demand. The carrier expects higher profits over the medium term. The carrier’s stock price has remained unchanged throughout 2010, compared with a 6% reduction in the benchmark NZSX-50 index. The company declared a final dividend of  NZD 4 cents per share, compared with  NZD 3.5 cents a share last year.

On the outlook, Air New Zealand commented: “The airline industry is showing signs of recovery with both demand and yields continuing to improve. The airline is planning to increase capacity in 2011 across the network, particularly on domestic and trans-Tasman services, through the addition of new aircraft, configuration changes and increased utilisation … we are optimistic that operating earnings will continue to improve through the 2011 financial year.”

Also in the South Pacific, shares in Regional Express increased 3.9% yesterday, as the carrier stated net profits in the 12 months to Jun-2010 surpassed levels prior to the global financial crisis, due to controls on costs and despite a revenue reduction in the period.

Net profit increased 7.2% in the period to USD21.7 million, while profit before tax slipped 14.7% to USD23.1 million, with the carrier stating the net profit result exceeded the record high profit of USD23.6 million reached "just prior" to the global financial crisis.

Rex Executive Chairman, Lim Kim Hai, commented the airline was able to take full advantage of "all the fiscal incentives put in place by the government to assist the economy", according to AAP. He added: "Together with efficiency gains and careful attention to costs, we were able to overcome the deficit of revenue to achieve a very satisfactory outcome."

The Executive Chairman said: "The outcome is all the more satisfying when we consider that the underlying profits before tax of Qantas international, domestic and regional combined was only about USD60 million."

Rex declared a final dividend of AUD 6.6 cents per share, fully franked. Regarding its outlook, Rex stated: "The group is unable to provide a profit guidance in light of a highly volatile economic outlook, passenger demand, exchange rate and fuel prices."