The majority of North and South American carriers were down on Wednesday (10-Feb-2010) as terrible weather conditions on the US east coast played havoc with airline operations. However, Stifel Nicolaus analyst, Hunter Keay, told MarketWatch the increased number of flight cancellations is expected to have only a small impact on revenues.

Another rise in oil prices (+1.0%), to USD74.52, also pushed stocks down further. The AMEX Airline Index (-1.4%) ended trading down.
In the wider market, the Dow (-1.4%) dropped, as materials stocks fell and investors became concerned over Federal Reserve moves to gradually tighten the central bank’s credit policy.

Air Canada (+4.6%) was one of few carriers to gain on Wednesday, after it reported a smaller than expected 4Q2009 net loss of CAD83 million (USD78.4 million) compared to CAD146 million (USD138 million) in the year-ago period.

See related article: Air Canada: Edging back from the brink

Copa falls on declines in yield and RASM

Cash, short term and long term investments ended 2009 at USD358.5 million, representing 29% of the last twelve months' revenues. During 2009 the Company funded from cash USD120 million in pre-delivery payments related to aircraft to be delivered between 2010 and 2011.

United Airlines was flat, while American Airlines (-0.2%) slipped, following news the two have reportedly refused to continue financing discussions with Chicago O’Hare International Airport until the airport reviews its airport fees. O’Hare officials recently announced plans to increase its landing charges by 38% and rental rates by 15-17%. United and American were in discussions with the airport to help fund Phase II of its expansion project.

For updates on a variety of North and South American carriers, subscribe to America Airline Daily, your one-stop shop for news, data and analysis from the dynamic North American, Caribbean and Latin American aviation markets. 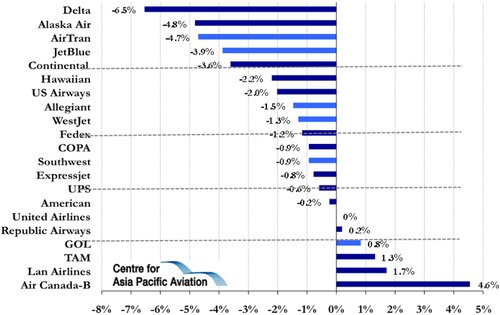