Canadian airline Porter received a boost in early 2015 with the sale of its terminal at its largest base and headquarters Billy Bishop Toronto City Airport. The sale no doubt helped to shore up Porter's finances at it awaits a decision by the city on whether it can move forward with operating Bombardier CSeries narrowbody jets from the airport.

The city is not likely to render a decision until late in 2015 as studies of the proposal, that includes a runway extension, continue. But Porter’s rival Air Canada has recently raised staunch opposition to the operation of jets at the airport even as the airline in the past reportedly cited interest in using jets at the airport closest to Toronto’s city centre.

As Air Canada formally (and unsurprisingly) launches opposition to Porter’s plans, Porter is operating in a status quo scenario while likely facing some of the same challenges other Canadian airlines face in 2015 – primarily pressure from the decline of the CAD against the USD.

Porter in late Jan-2015 sold the terminal at Billy Bishop owned by Porter Aviation Holdings to a consortium led by InstarAGF Asset Management. Specific terms of the sale were not disclosed, but previously the Wall Street Journal had valued the terminal at CAD500 million (CAD611 million).

The airline has maintained it would use proceeds from the sale to invest in its growth, which hinges on gaining approval to operate larger jets from Billy Bishop. Porter presently operates 26 Bombardier Q400 turboprops and has 12 CSeries jets on order.

At one point, Porter extended the deadline for non-refundable deposits on the jets from late 2013 to Apr-2014. It is not certain if the airline has received further extensions. Bombardier has had its share of upheaval during the last year as the CSeries has faced delays and there have been numerous personnel adjustments within the company, so collecting money owed from Porter could be a low priority.

See related report: Porter Airlines state of limbo persists as it awaits a decision on its controversial expansion plans

At the time of the sale a report in The Toronto Star cited critics who argued that public lands were flipped for a personal profit by a private operator. Porter CEO Robert Deluce countered those arguments with the conclusion that Porter was the only entity willing to design and build a terminal at the airport. In the past Mr Deluce has concluded that the terminal was a non-core asset, and that Porter never intended to be a terminal operator.

It also seems as if the airline’s investors could have become more vocal about returns. Mr Deluce told The Toronto Star that it had been almost 10 years since investors committed to Porter, so it was appropriate that they get some returns.

Porter attempted to pursue an IPO in 2010, but cancelled its plans citing poor market conditions. The sale of the terminal likely allowed Porter to issue some return on investment to assuage investors that perhaps were growing impatient.

Mr Deluce has maintained that Porter is a profitable and sustainable entity in its present state, but specifics of the privately held airline’s finances are hard to track down.

As Porter put the terminal it owned at Billy Bishop up for sale, Air Canada started complaining about terminal rates and terms at the airport, and that it was assessing the viability of its operations based on those costs. Air Canada is the only other airline that operates from Billy Bishop with Q400 operated flights to Montreal.

Data from CAPA and OAG show that Air Canada deploys approximately 13,600 weekly seats from Billy Bishop while Porter’s seats total over 71,000 Porter accounts for about 85% of total seats deployed from Billy Bishop and 84% of the ASMs. 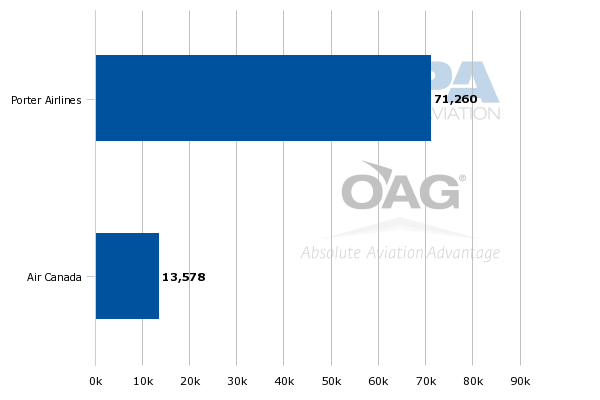 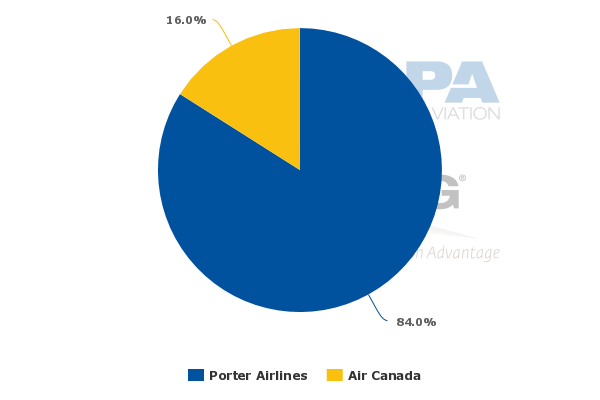 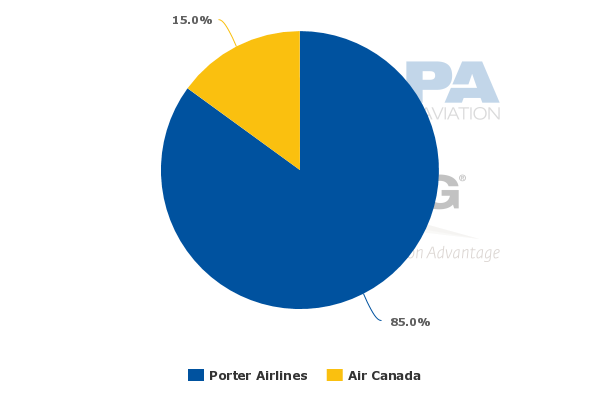 Air Canada also argues that with its current portfolio of slots it can only serve one airport despite customer demand for service to Ottawa, New York Newark and other markets. Air Canada serves these markets from its hub in Toronto Pearson (which is roughly 25km from Billy Bishop, which is located on an island right beside the city centre).

Data from CAPA and OAG show for the week commencing 20-Apr-2015 that Air Canada’s seats from Toronto Pearson to Ottawa are up 10% year-over-year while WestJet’s seat have decreased 9%. Overall seats in the market are up 10%. From Newark seats are flat year-on-year with Air Canada and Star Alliance partner United providing roughly 4,600 one-way seats.

Air Canada has stated its preference is to “see a growing downtown airport focussed on short-haul passengers using modern turboprop aircraft”. Its stance is no doubt driven in part by the threat of new competition on long-haul service from the Toronto area as Porter has cited Los Angeles, San Francisco, Orlando, Tampa and Nassau as potential markets for its new jet operation.

The level of influence generated by Air Canada’s formal stance against the operation of jets at the airport is tough to determine. There is huge opposition from the community for the expansion at Billy Bishop. But PortsToronto officials told The Toronto Star in early Apr-2015 that Air Canada has changed its stance on the operation of jets at the airport, noting that the airline has indicated publicly and in correspondence with PortsToronto that it would be interested in using jets at Billy Bishop.

Air Canada’s reversal could be driven my many factors, including the investment necessary to operate jets from Billy Bishop. It would be a larger operation in scale, and perhaps a cost benefit analysis proved that it was tough to justify jet operations from two nearby airports. The two service patterns at each airport would also be entirely different given Toronto is its largest hub and Billy Bishop would be primarily an O&D operation.

Until a decision is made on Billy Bishop’s future, it is status quo for Porter

Throughout all the mounting opposition to Porter’s expansion plans at Billy Bishop during the last couple of years, the airline has continued to operate in a status quo scenario.

It is not clear how Porter is faring with the currency pressure faced by its rivals WestJet and Air Canada. WestJet has stated that fuel costs are denominated in USD, but it purchases fuel in CAD, so compared with US airlines, the foreign exchange devaluation mitigates decreases in West Texas Intermediate prices by about one third.

Porter may have faced headwinds if its hedges were not constructed to allow some benefit for the rapid decline in fuel prices that began in late 2014. It also is not clear how much of its expenses are denominated in the USD. But Porter is likely facing some fallout from the currency pressure.

As of 22-Apr-2015, the CAD was 1.22 against the USD. For the week of 20-Apr-2015 to 26-Apr-2015 roughly 33% of Porter’s ASMs are deployed into international US transborder markets. But the airline could be gaining some point of sale traction in the US since travelling to Canada has become cheaper for US residents. 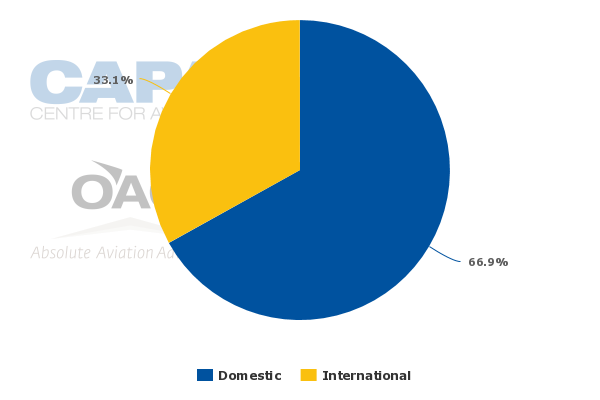 One area of weakness that Porter is shielded from at the moment is capacity pressure from Canada to sun destinations. WestJet at the beginning of 1Q2015 estimated industry capacity had increased 11% year-on-year from Canada to the Caribbean and Mexico, and some pricing and margin pressure was accompanying those increases. Porter cannot reach those destinations with its fleet of Q400 turboprops.

Porter is seeing some increased competition from WestJet Encore after the regional subsidiary created by WestJet launched flights from Toronto to Quebec City in Mar-2015. Encore also operates from Pearson to Thunder Bay and Quebec. But WestJet mainline was already competing against Porter to numerous destinations from Toronto, so it is obviously a known entity to Porter.

New route launches by Porter in 2015 include new service from Billy Bishop to Charleston, SC, and the re-launch of seasonal service to Mont Tremblant in Quebec, Myrtle Beach in South Carolina and Burlington in Vermont. WestJet also operates flights from Toronto to Myrtle Beach.

Did Porter’s investors hope to cash in before the city decides on the fate of Billy Bishop?

The latest criticism from Air Canada that Porter faces is hardly surprising given that Air Canada battled diligently to re-launch operations from Billy Bishop airport after Porter made its debut in 2006.

With the terminal sale perhaps easing some financial and investor pressure Porter was feeling, the airline for the time being can focus on leveraging it leading position at Billy Bishop. But much uncertainty surrounds Porter’s long-term viability if its plans for operating jets fail to secure support from the city. Perhaps that was not lost on investors that wanted to cash in before a decision was rendered.