Air Canada, GOL, FedEx stand out as market rises. But American Airlines, Continental out of favour

Air Canada (+7.7%), GOL (+6.2%) and FedEx (+4.8%) stocks were the day’s best movers on Tuesday, while the Dow Jones index moved up a healthy 2.4% on stronger consumer sentiment news. This did nothing for Continental (-1.8%) or American Airlines (-1.1%) though. If in fact consumer sentiment surveys genuinely reflect spending intentions, it should be the airline sector which is an early beneficiary.

However, there is little to suggest that consumers are planning to spend up big on discretionary items like air travel this Summer, at least on American or Continental, according to investors. 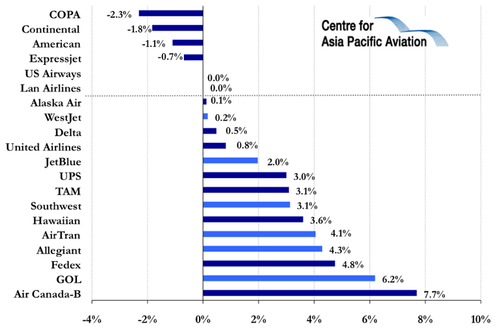 GOL again continued its upwards movement, thanks to the lower level of concern over the airline’s funding arrangements.

Likewise, since some of the value has been removed from FedEx’s capitalisation, a slightly less negative outlook from analysts helped to restore some momentum yesterday.

Air Canada is in final “round-the-clock” negotiations with the Canadian Auto Workers Union which looks after 4,500 of the airline’s sales and check-in staff. The union is one of the more aggressive and has concerns about Air Canada’s plans for a pension moratorium while rectifying its pension deficit. But the talks are moving along. And the carrier also benefited from a tentative deal (“MoU”) with a credit card processor to reduce the level of unrestricted cash which Air Canada must maintain; this would help with cash flow – and will put pressure on other suppliers to follow suit.

All of this is helping to relieve a little of the immediate concern over Air Canada’s survival prospects.