Air Canada bullish about its prospects as recovery gains steam

Before the COVID-19 pandemic sixth freedom traffic from the US was a major pillar in Air Canada’s international strategy. And as international markets continue to reopen, the airline is doubling down on the opportunity it believes is inherent in those traffic flows.

The company’s bullishness is reflected in its planned US transborder service to up-and-coming growth areas in the US during the upcoming months.

Air Canada is also identifying Calgary International airport as a mid-continent hub to connect traffic flows from western to eastern Canada, and the airport will remain for strategic for the airline as the recovery in traffic continues.

Canada’s largest airline recognises that market dynamics within the country are changing as more low cost competitors enter the market. But Air Canada remains bullish about its ability to compete robustly, underpinned by what it deems as a superior network.

As Canada and other countries worldwide continue to reopen, a major focus for the country’s largest airline, Air Canada, during 2022 is growing the connectivity at its three major hubs – Toronto, Montreal and Vancouver.

A major push from those hubs will include transborder service to the US to support growing international transit passengers.

“Air Canada is proud to have claimed the title of the largest foreign carrier operating in the United States, and this is a title that we aim to retain for the long term”, said the airline’s SVP of network planning Mark Galardo during the company’s recent investor day.

The airline is aiming to offer 94 US transborder routes in the Northern Hemisphere’s summer season in 2022, Mr Galardo explained.

Data from CAPA and OAG show that in early Aug-2022 Air Canada will hold an approximate 45% share of departing frequencies between Canada and the US. United’s share is projected at 13%, followed by American at 11% and WestJet’s approximate 10% share.

Air Canada will disproportionately focus that growth on a subset of US metro areas that are growing above the national average, including Atlanta, Austin and Seattle, said Mr Galardo.

Air Canada believes it can beat its 2019 sixth freedom performance

Air Canada is also considering other new routes to the US metro areas to bolster connectivity through its hubs and strengthen its sixth freedom traffic, which has been a key tenet of the airline’s international strategy since the middle of the past decade.

At the start of its sixth freedom push Air Canada's assessment was that it could offer a better product than its US counterparts and good geographical positioning of its international gateways, particularly Toronto. The goal was to capture travellers from markets like Boston or Pittsburgh with little or no service to Asia and less service to Europe than from other large US hubs.

“Sixth freedom traffic that flows through our global hubs is a cornerstone of our international strategy”, Mr Galardo said. He added that the US market had continued to be the most lucrative and desirable aviation market in the world, and was experiencing a robust rebound in demand.

Air Canada estimates there will be more than 1,000 city pairs on the trans Atlantic connecting through its hubs during the US summer 2022 high season.

Simply put, the airline believes that – emerging from the pandemic – its sixth freedom strategy will be even more important.

The airline’s chief commercial officer Lucie Guillemette explained that the company had set a goal for its sixth freedom performance in 2017 when its ambition in that sector really took off.

Ms Guillemette explained that based on the network Air Canada has, and the product the airline is offering, “we will definitely exceed 2019 levels when it comes to sixth freedom, without a doubt”.

Back in 2014 Air Canada noted that if it succeeded in capturing its projected share of the international transit traffic it could generate CAD400 million (USD371 million) in annual revenue.

Air Canada has also declared that Calgary International airport has become a mid-continent hub for the airline, to strengthen connections from western to central and eastern Canada.

Mr Galardo explained that Calgary would continue to play an important role for Air Canada during its recovery. The airline represents approximately 28% of the airport’s departing frequencies. 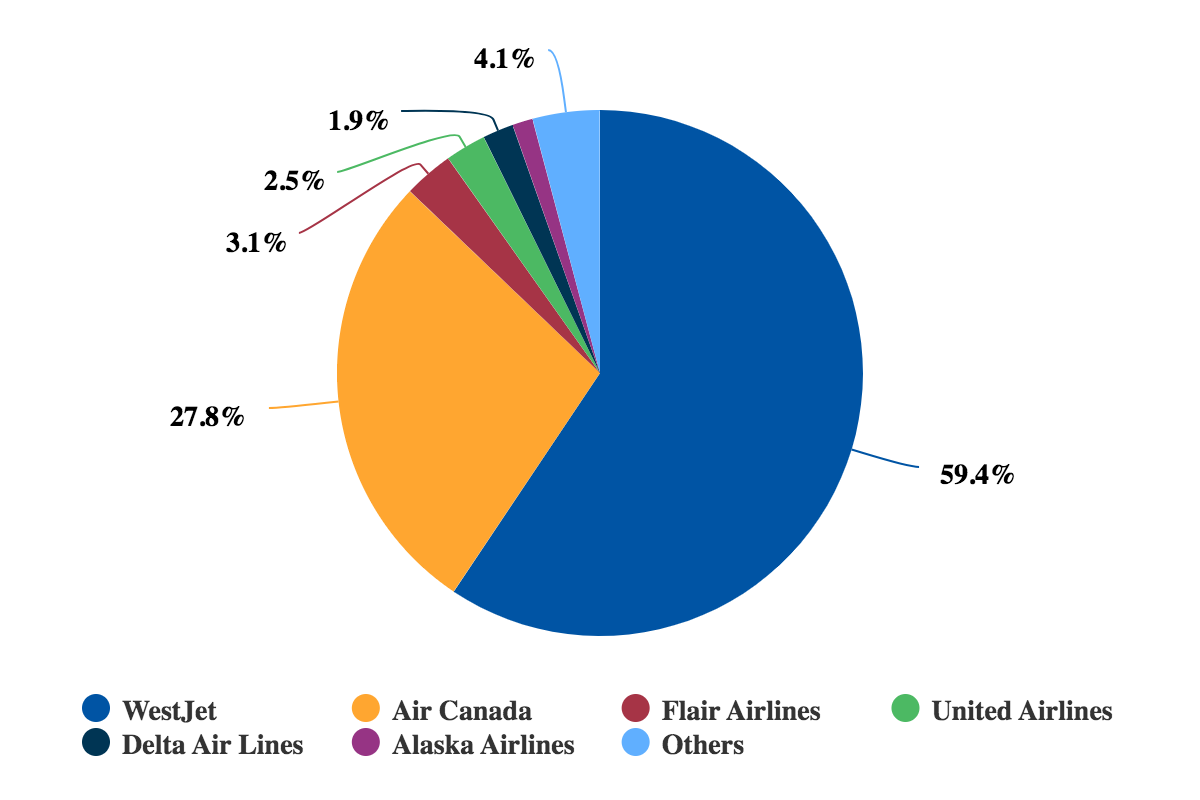 “We’ve witnessed the strong results some of our American peers have observed with their mid-continent hubs”, Mr Galardo said.

It seems logical for Air Canada to build up a mid-continent hub as it bolsters connections throughout its network.

And the strengthening of Calgary is also occurring as existing and new ultra-low cost airlines expand and debut in Canada. Flair Airlines continues to grow, and Lynx Air has recently made its debut. CAPA’s Fleet Database shows that all 10 of Swoop’s Boeing 737-800s are back in service. Swoop is the ULCC subsidiary launched by WestJet in 2019.

Air Canada is not blind to those new competitors. “We will continue to defend our position as the top choice for travel within Canada”, Ms Guillemette declared. “As domestic competition intensifies, our extensive network, the strength of our hubs and the breadth of our offering will continue to be a key differentiator for us.”

Air Canada has declared that it is in full recovery mode, and the company believes the steps it is taking will position it favourably to compete for both domestic and international passengers.

And although the airline recognises that new start-ups are ready to capitalise on the recovery, Air Canada seems undaunted as it continues to play to its strengths.