Air Berlin increases stake in NIKI; easyJet to focus on profitable growth in the medium term

In Europe, shares in easyJet and Ryanair gained yesterday, by 1.7% and 1.6%, respectively, while shares in Air Berlin slipped 0.5% yesterday.

Air Berlin, on 17-Feb-2010, confirmed it has contractually agreed with Privatstiftung Lauda to indirectly acquire 25.9% of the shares of NIKI Luftfahrt GmbH, increasing its current participation the Austrian LCC from 24.0% to 49.9%. The purchase price for the shares is EUR21 million.

NIKI's integration into the Air Berlin Group increases Air Berlin's fleet size by 11 aircraft, with the number of passenger for the Air Berlin to increase by approximately 2.6 million (Based on provisional figures). NIKI achieved revenue of EUR260.2 million (up 17% year-on-year) and EBIT of EUR23.1 million (+71%) in 2009. NIKI will be fully consolidated within the Air Berlin Group and will remain a legally independent company with its own management. Niki Lauda will remain at NIKI for at least another three years.

easyJet to reduce costs and focus on profitable growth

Meanwhile, easyJet’s Chairman, Sir Michael Rake, speaking at the Company's Annual General Meeting on 18-Feb-2010, stated the carrier has “strengthened the fundamentals of the business” in 2009, with the LCC planning to continue to reduce costs and increase profitability, return on equity and European market share moving forward.

Specifically, Sir Michael commented that the carrier’s programme to take GBP190 million of cost p/a out of the business translates into a net GBP1 cost reduction per seat (after inflation) by the end of Sep-2012. This would give easyJet a “great platform for profitable growth in the medium term and to achieve our 15% return on equity target”.

The easyJet Board has also agreed a fleet plan of approximately 7.5% growth p/a in seats flown over the next five years, enabling easyJet to grow its share of the European short-haul market from around today's 7% to 10%. See related report: Airline structural change in Europe: a major turning point – if labour allows it

In the Asia Pacific region, Thai AirAsia CEO, Tassapon Bijleveld, stated the carrier has handled 19 million passengers since launching operations six years ago, with plans to handle 5.8 million passengers in 2010, for an 11.5% year-on-year increase. The LCC, which plans to replace six B737 aircraft with A320s by Sep-2010 (increasing capacity by 25%) also expects to maintain an average load factor of 85% during 2010. Shares in Thai AirAsia’s parent, AirAsia, gained 1.5% yesterday.

NB: You can keep in touch with all the LCC news from around the world every morning with Peanuts Daily. Sign up today - it's free for a limited time! 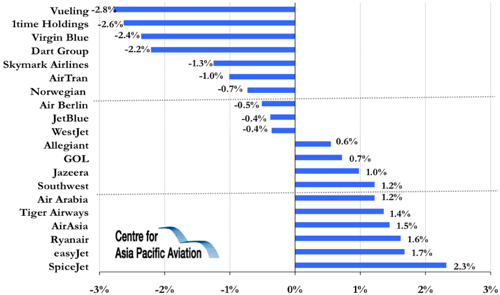