Air Astana's new unit FlyArystan will launch operations on 1-May-2019, giving leisure passengers and corporates the first low cost option in Kazakhstan’s growing domestic market. While FlyArystan is technically not an airline – because it will be using Air Astana’s operator’s certificate – the new budget brand could emerge as the first significant low cost competitor in Central Asia.

Air Astana, Kazakhstan’s largest airline, decided to establish a low cost brand in 2018. FlyArystan has been tasked with achieving 40% lower unit costs than its parent on the same routes, a goal driven mainly by the use of higher density aircraft.

Ancillary revenues are also a key component of the FlyArystan strategy, differentiating it from other domestic competitors. Kazakhstan recently implemented legislative changes enabling airlines to start charging passengers for baggage.

By unbundling and using high density aircraft FlyArystan should enable Air Astana to compete more effectively in Kazakhstan’s price sensitive domestic market. Although there are no low cost carriers in Kazakhstan, SCAT Airlines and Bek Air compete aggressively on price and are essentially low fare competitors.

SCAT is the second largest airline in Kazakhstan, accounting for approximately 26% of current domestic seat capacity. Bek is the third largest competitor, with approximately a 13% share. 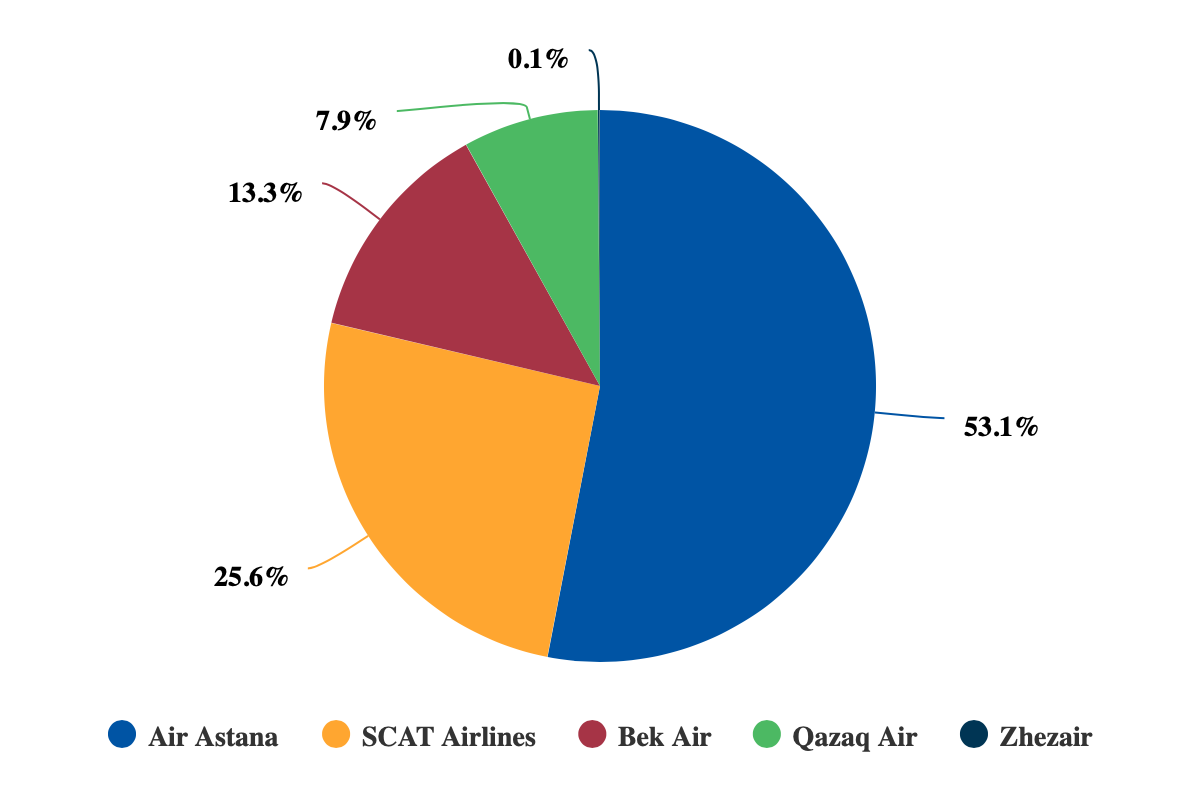 Air Astana still has a leading 53% share of domestic seat capacity. However, in recent years the flag carrier has been focusing on expanding its international operation (including sixth freedom transit traffic), leading to domestic market share declines.

SCAT’s domestic seat capacity has nearly tripled during this same six-year period. Bek Air has expanded rapidly since it launched in 2011.

Qazaq Air is also a new competitor, launching operations in 2015. Qazaq is fully government-owned whereas Air Astana is part government owned and part owned by BAE Systems. SCAT and Bek are privately owned.

FlyArystan will initially only operate domestic services, enabling Air Astana to regain domestic market share. It also intends to compete in the regional international market at a later stage.

FlyArystan becomes only the fourth low cost competitor in the CIS

Kazakhstan is currently served by five foreign LCCs: airBaltic, Air Arabia, flydubai, Pegasus and Wizz Air. As LCC competition in the international market intensifies Air Astana will look to use FlyArystan, following a dual brand strategy similar to the strategy it is now starting to pursue in the domestic market.

As CAPA highlighted in a Nov-2018 analysis report (after Air Astana first unveiled plans to launch a budget brand), the Aeroflot LCC subsidiary Pobeda is particularly a future threat. Pobeda is now the largest (and most successful) LCC in the CIS region.

FlyArystan becomes only the fourth low cost brand in the CIS after Pobeda, Air Manas and Buta Airways.

Air Manas is a small Kyrgyzstan-based joint venture LCC with Turkey-based Pegasus. Buta is the low cost brand of Azerbaijan Airlines, which has followed a similar strategy to Air Astana's by launching a low cost operation using its existing operator's certificate and aircraft already in the group's fleet.

FlyArystan is launching with two 180-seat single class A320s that have been reconfigured from Air Astana’s typical two class configuration. The fleet is slated to grow to four A320s by the end of 2019 and to 15 aircraft by 2023.

The new low cost operation will launch on 1-May-2019 and in the first week will operate flights from Kazakhstan’s largest city Almaty to Nur-Sultan (formerly known as Astana), Karaganda, Taraz and Uralsk. Almaty-Nur Sultan will be served with two daily flights and the other three routes with one daily flight each.

Daily flights from Almaty to Pavlodar and Shymkent are slated to start on 30-May-2019, giving FlyArystan six routes and seven daily flights at the end of its first month.

Kazakhstan currently has 18 airports with scheduled commercial services but only 10 have more than 5,000 weekly seats. Kazakhstan is a vast country and there is no high speed rail, making air travel the most attractive option for travelling between most cities.

There are approximately five million annual domestic passengers in Kazakhstan. With low fare stimulation the market should continue to grow rapidly, given the size of the population (18 million) and Kazakhstan’s growing middle class population.

FlyArystan will compete against SCAT and the regional airline Qazaq Air on Almaty-Pavlodar. Bek is the only competitor on Almaty-Karaganda and Almaty-Uralsk.

Taraz is a new market for the Air Astana Group

Air Astana does not currently have any services at Taraz. The Almaty-Taraz route is not served by any airline at the moment, although it was previously served by SCAT and Qazaq.

Taraz is currently only served from the capital Nur-Sultan (formerly known as Astana) by SCAT, and from Moscow by Russia’s S7 Airlines. Air Astana is banking that with low fares FlyArystan can stimulate demand and grow a market that is served mainly by surface transport.

Taraz is located approximately 500km from Almaty. It takes five to six hours to drive between the two cities. There is also a slow speed train that takes about nine hours.

Shymkent is much larger and has a population of nearly 1 million, making it the third largest city in Kazakhstan (after Almaty and Nur-Sultan).

Air Astana has two daily flight on Almaty-Shymkent using a mix of E190s and A320s. SCAT and Qazaq also compete on the route and each offer one daily flight. Bek dropped Almaty-Shymkent in Sep-2018 but was a small player, with just three weekly flights.

Air Astana will continue to operate Almaty-Shymkent with two daily flights following FlyArystan’s launch. Therefore, in this case Air Astana is using FlyArystan to add capacity on a trunk route and give passengers the option of flying with its full service or budget brands.

Air Astana is also giving passengers the options of a full service and low cost brand on the key Almaty-Nur Sultan route.

With the launch of FlyArystan Air Astana's capacity share on Almaty-Nur Sultan could reach 80%. FlyArystan will initially generate 2,520 weekly one-way seats on the route, which will give it approximately a 13% share of total seat capacity. SCAT has a similar amount of capacity on Almaty-Nur Sultan, while Bek and Qazaq are smaller competitors.

How FlyArystan’s network strategy evolves as its fleet expands will likely hinge on the success of the various route types.

If FlyArystan can prove it can operate alongside Air Astana on Almaty-Nur Sultan and Almaty-Shymkent without impacting the parent, Air Astana will likely adopt a dual brand strategy for more domestic trunk routes. Of the initial six routes for FlyArystan, only Almaty-Nur Sultan and Almaty-Shymkent are among the top 10 domestic routes in Kazakhstan; the other eight routes in the top 10 could also be feasible for FlyArystan to operate alongside Air Astana.

If FlyArystan is successful in totally new markets for the group, such as Temez, Air Astana will also likely use the new brand to enter similar unserved routes.

So far Air Astana has been upbeat, noting high uptake since FlyArystan began ticket sales at the end of March.

Air Astana has also highlighted FlyArystan’s rapid launch with the first flight operating only six months after board approval. However, obviously such a quick launch would not have been achievable if Air Astana had created a subsidiary rather than unit or brand and applied for a new operator’s certificate.