Air Arabia’s shares soared 14.6% yesterday, outpacing a 10.4% gain in the Dubai Financial Market (DFM) index on Monday, after the Abu Dhabi Government agreed to provide USD10 billion to the Dubai Financial Support Fund that would be used to satisfy a series of upcoming obligations of Dubai World.

This could be seen as a gradual squeeze on Dubai by its wealthier neighbour, even though the funds were officially provided to Dubai without conditions attached. Dubai will reportedly consider selling assets after receiving the bailout funds from Abu Dhabi. There is no word whether this could involve its aviation assets including Emirates Airline. 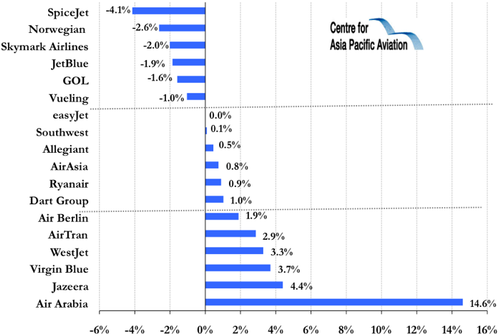