Algeria’s national carrier Air Algerie has announced plans to order 16 new aircraft as part of a government push to expand the airline’s international reach to attract investment and grow tourism – which lags well behind the rest of North Africa.

The A330-200s will be additional to the five A330-200s already in the fleet and will be used to open new long-haul routes to Johannesburg, New York, Sao Paulo and Shanghai.

The planned aircraft order is substantially bigger than previously indicated by Air Algerie CEO Mohamed Salah Boultif in Nov-2012, when he reportedly said the airline planned to invest EUR600 million (USD801 million) in eight new aircraft by 2016, including two dedicated freight aircraft (which are missing from the order announced). However, no details of expected delivery schedule have been given.

Air Algerie has given little detail about how it will utilise the extra capacity. Mr Boultif said in Aug-2012 that the carrier was seeking to strengthen its international business, in particular on the African continent where it operates to just 10 points outside of Algeria. With the exception of Egypt, all are in eastern Africa.

The carrier is also likely to increase capacity in its European markets, particularly those where it does not currently have a dominant position, and Air Algerie is coming under increased pressure from Middle Eastern carriers.

Air Algerie operates an extensive western Europe network of 18 destinations across seven countries France, Spain, Belgium, Germany, Italy, the UK and Switzerland. France is by far the biggest market due to historic ties. As part of its expansion programme, Air Algerie reportedly plans to add three times weekly Amsterdam to its network. The route is currently not served by any carrier. No start date for the route has been announced.

Outside of Europe the carrier also operates three times weekly to Montreal as well as to the Middle East and Moscow. The carrier dropped the unprofitable Algiers-Beijing route in 2012 on which it was the sole operator. 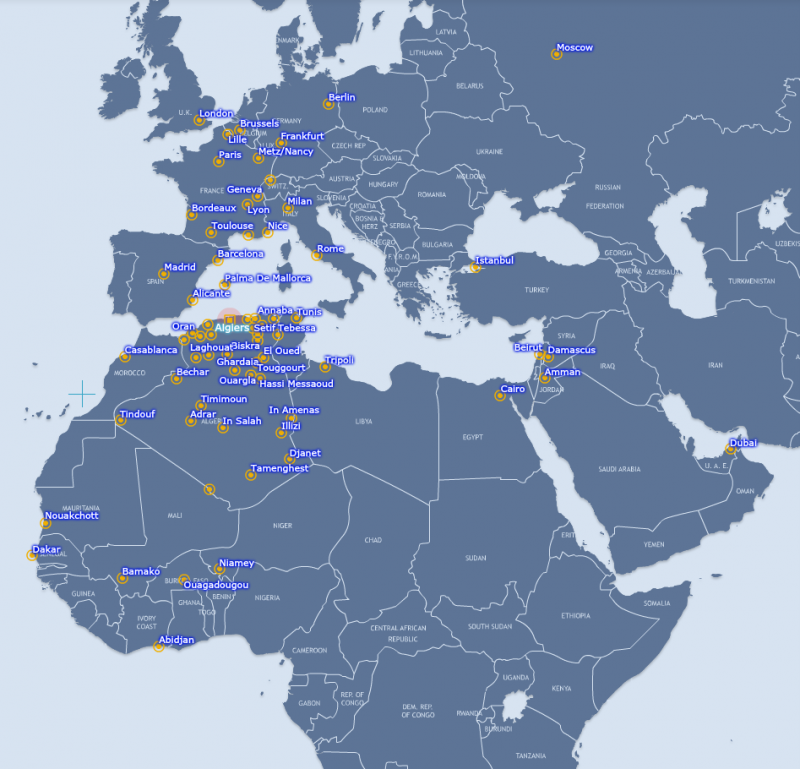 Western Europe accounts for about 76% of the Air Algerie’s international seat capacity, while the carrier deploys just 12% of its international capacity across north Africa and central/western Africa according to Innovata. 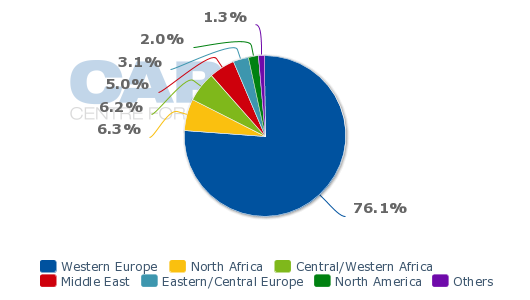 The carrier also dominates capacity in its home market.

Air Algerie will also continue to have the domestic market to itself for the foreseeable future, with Minister of Transport Amar Tou saying that allowing private airlines to compete with Algeria was not on the agenda. Competition might be considered “when economic conditions permit”, Mr Tou said.

Aigle Azur launched three times weekly services between Paris CDG and Algiers in Dec-2012. It will move to a daily service on the route from 01-Apr-2013 operating 144-seat A319 aircraft offering about 1,000 seats.

Air Algerie trails Aigle Azur in the Algiers-Paris Orly market, offering about 4,700 seats to Aigle Azur’s 5,500. But the positions will reverse dramatically in Apr-2013 when Air Algerie will increase capacity to about 5,300 seats a week and again to 6,800 seats per week in Jul-2013. Over the same period Aigle Azur will reduce its offering to about 4,000 seats, according to Innovata.

Air Algerie has signed a cooperation agreement with Air France-KLM

Air Algerie also signed a cooperation agreement with Air France-KLM in Dec-2012 to increase services between Algiers and Paris and open new routes between Algeria and France from late Oct-2013. Services would be added gradually and in line with demand.

Air Algerie is extending its lead in the western European market

Air Algerie has been extending a lead in the western European market overall since Oct-2013 and will stretch this out further over the next six months as it adds capacity going into the traditional high season.

But Air Algerie holds a market leading position in only three western European countries that are directly serviced from Algeria – France, Spain and Switzerland (where it holds a monopoly).

Air Algerie is facing increased competition from both Europe and the Middle East.

Spanish carrier Iberia says it will expand its Algerian network from 31-Mar-2013 by launching two new routes. Iberia will operate four times weekly from Alicante to Oran, Algeria's second largest city after the capital Algiers, which Air Algerie currently has to itself offering 850 seats a week. Iberia will operate Bombardier CRJ200 and CRJ900 aircraft of the route offering a total of 280 seats a week.

Iberia will also become the only carrier flying between Valencia and Algiers when it launches a weekly service on 31-Mar-2013, also using a CRJ900.

Emirates announced on 14-Feb-2013 that it will make Algiers its 22nd African destination from 01-Mar-2013 operating daily from Dubai with an A330-200 offering about 1,700 seats a week. Air Algerie also operates on the route and is responding to the new competition by progressively ramping up its capacity over the next four months from nearly 1,100 weekly seats to about 1,900 by 01-Jul-2013. 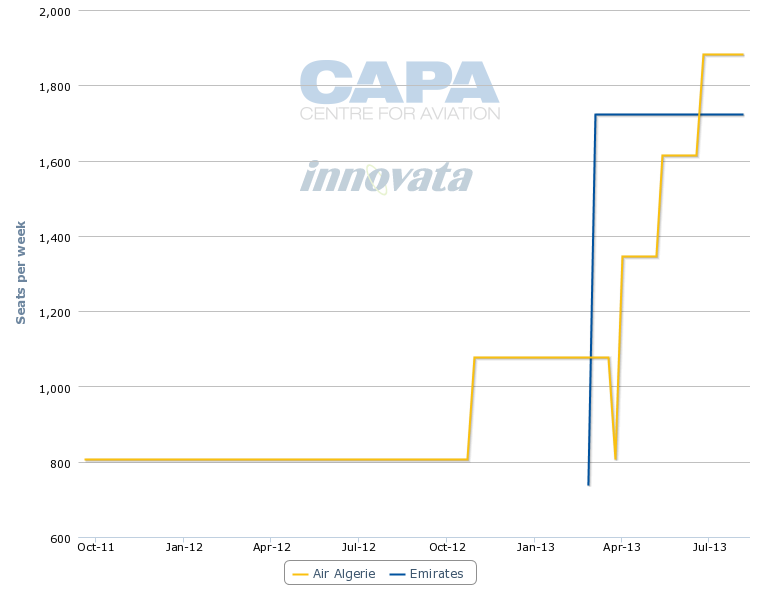 Royal Jordanian plans to add a third weekly frequency in April on a route targeting medical tourism which it expects will be popular with business travellers working in the pharmaceutical industries. Jordan is becoming a popular destination for medical tourism in the region.

As Air Algerie expands its network into China, a number of potentially valuable network connections necessarily arise. The planned addition of Sao Paulo and Shanghai is interesting in that it will allow Air Algerie to enter the potentially lucrative market of connecting the high growth regions on South America and Asia, particularly China.

For this the airline's hub is ideally placed. If Air Algerie operates Sao Paulo-Shanghai one-stop over Algiers it will cover a distance of 10,046nm, just 13nm further than the shortest possible distance on the route of 1,033nm. 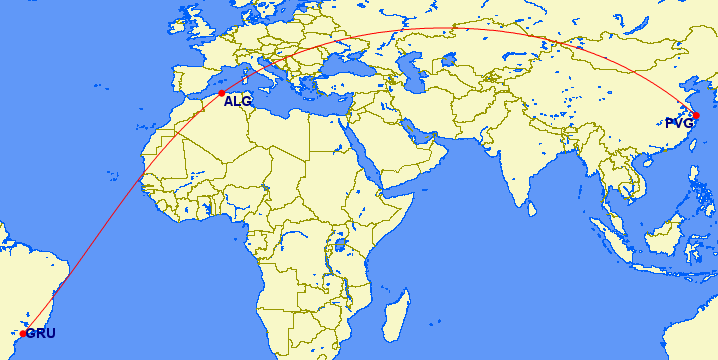 Ethiopian Airlines has announced it will operate Sao Paulo to Addis Ababa via Lome from 01-Jul-2013. That service will connect to its existing Addis Ababa-Guangzhou service.

Tourism contributes only about 1% of Algeria’s economy which is dominated by the oil industry. Algeria’s tourism industry is held back by a lack of adequate hotel accommodation, the threat of terrorism and antiquated visa requirements.

The Algerian Government’s protectionist stance over Air Algerie has also limited the entry of LCCs into the market. Just 0.5% of Algeria’s total seat capacity is provided by LCCs. This is in stark contrast to its western neighbour where LCCs have captured about 36% of capacity share and been a driving force behind Morocco’s tourism industry – which is expected to play a crucial role in the country’s economic recovery in 2013.

Morocco has benefitted from an open skies agreement with Europe which has attracted significant LCC capacity. Like Algeria, western Europe is the country’s biggest aviation market led by France.

The Algerian government is building tourism under its “Horizon 2025” plan which aims to improve infrastructure, encourage hotel development, particularly along the Mediterranean cost.

Open skies on the back burner – again

Tourism will be held back by Algeria’s reluctance to liberalise its airspace. Any thoughts of moving towards an open skies policy, reportedly hinted at during the Arab Air Carriers Organization (AACO) annual meeting in Algiers in Nov-2012 have been put back on the back burner to protect inefficient Air Algerie which would struggle to compete with the influx of competition this would bring.

However, the country and Italy in Jan-2013 extended their bilateral air services agreement which will see weekly passenger frequencies increase from 14 to 18 times a week.

Alitalia already operates Italy’s entire 14 Algerian frequencies to Algiers, but announced on 14-Feb-2013 that it plans to add Oran as a new destination from Rome Fiumicino Airport in the northern hemisphere summer 2013, presumably using the additional four frequencies. Air Algerie does not operated on the route.

The Algerian government's decision to provide funding to Air Algerie for fleet and network expansion could indicate that the country is prepared to increase its international engagement as it seeks to generate a tourism market and attract investment money to build much needed infrastructure.

In recent years the government has halted privatisation of state-owned industries and restricted imports and foreign involvement in its economy.

But a reluctance to liberalise its skies and embrace aviation as a driver of economic activity in the interest of protecting its national carrier, will inevitably act as a drag on the speed of economic reforms in a country where, with a GDP of about USD275 billion, about a quarter of its population live below the poverty line.