African airlines are projected to return to profitability in 2010 for the first time since 2002 in response to the renewed economic activity and bolstered by what IATA describes as "a decade of cost-cutting, restructuring, and re-engineering." Reflecting these developments, projections for African airline profits stand at a USD100 million profit in 2010, with a breakeven result anticipated for 2011.

According to Boeing forecasts, the overall African economy is projected to grow 4.8% in 2010 following 2.9% growth in 2009, with the strong growth resulting from worldwide recovery stimulating demand for African exports as well as imports into the continent. West Africa, buoyed by foreign interest in petroleum development, shows the strongest growth on the continent.

Boeing in Sep-2010 forecast air carriers in Africa will experience steady growth over the next 20 years as air travel in Africa continues to grow with the economy. Boeing's forecast calls for the delivery of 710 airplanes (2.3% of the estimated global total) with a value of approximately USD80 billion for the African airplane market over the next 20 years.

Boeing forecasts that twin-aisle aircraft will account for 32% of new airplanes delivered to African carriers over the next 20 years compared to 23% worldwide, while single-aisle airplanes are forecast to represent 60% of the African new aircraft market, compared to 69% worldwide. Regional jets and large aircraft account for a much smaller proportion of the African total, at 7% and 1% respectively. 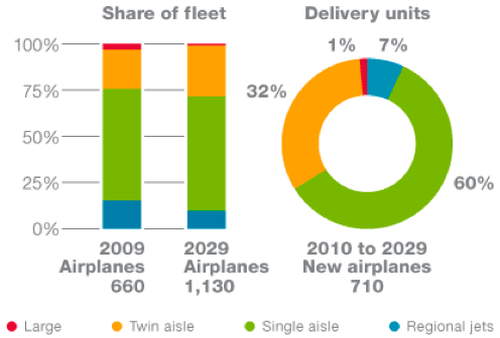 Most of the African fleet is single-aisle airplanes supporting flights within the continent and between North Africa and Europe, traditionally Africa's principal trading partner. As the demand for African commodities grows and foreign development and tourism increase, African carriers will require a more modernised fleet in order to compete on routes historically dominated by foreign carriers. Africa's current fleet is 19.8 years old on average. 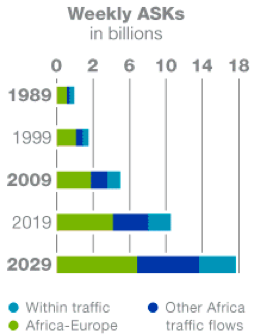 Airbus’ outlook for Africa is more bullish, with the manufacturing expecting 1,270 aircraft deliveries in the 2009 to 2028 period, comprised of 341 aircraft of under 100 seats and 929 aircraft with more than 100 seats. This represents a more than doubling of the African passenger aircraft fleet.

Like Boeing, Airbus sees opportunities arising from the need for replacing older aircraft in the region, particularly in the single-aisle market segment. According to Airbus, nearly 100 (or 17%) old generation passenger aircraft still in service in Africa.