Ukraine’s leading carrier, AeroSvit Airlines, is steadily expanding while the Ukrainian Government has been hinting at impending privatisation of its remaining stake in the carrier. The next six months will see the airline significantly increase capacity over summer while continuing to operate significantly more capacity in winter 2012/13 compared to the previous year.

The Ukrainian Government sold its 61.6% stake in UIA to three existing minority shareholders in Feb-2011 including UIA Beteiligungsgesellschaft mbH, which became the majority shareholder with a 59% stake in the carrier. In May-2012 it was reported that Ukraine's Government plans to sell its 22.39% stake in AeroSvit Airlines in 2012 or 2013. The Government’s stake is currently worth approximately USD542,000.

While AeroSvit and UIA are competitors, they do cooperate on some services. In Dec-2011 the airlines signed a codeshare agreement covering Kiev-Tel Aviv, Kiev-London, Kiev-Almaty, Kiev-Astana and Kiev-Donetsk services. AeroSvit will be dramatically increasing capacity offered over the next six months, however, UIA will not be matching the increase to the same extent.

AeroSvit’s capacity for summer 2012 will be much higher than it is currently, which is typical as the carrier usually adds capacity for the peak summer season. But the carrier’s capacity will remain significantly higher in winter 2012/13 in comparison to the previous winter. 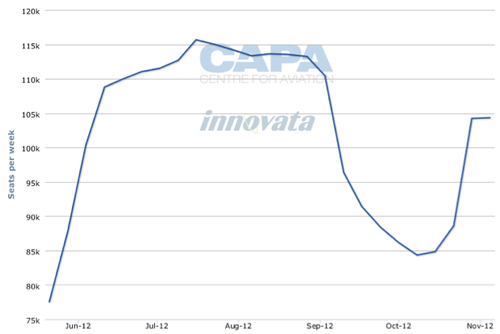 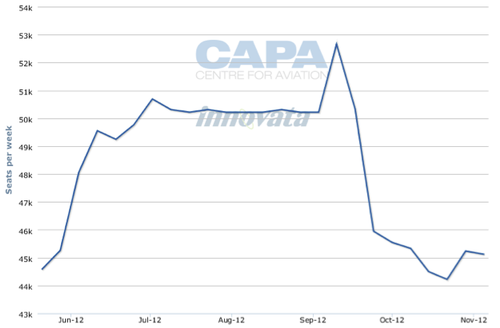 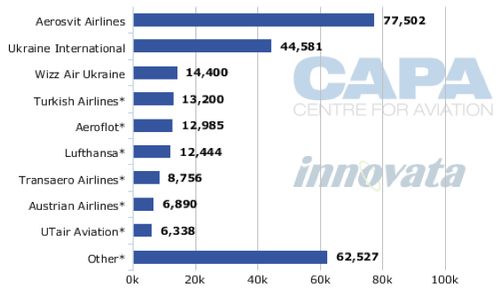 AeroSvit is planning significant network and capacity expansion over summer 2012 and into winter 2012/2013. The capacity increases will come from a combination of frequency increases on its existing network and new route launches.

Several of these have already started including three to Russia. AeroSvit also recently increased Kiev Boryspil-Vilnius frequency from twice to three times weekly from 17-Apr-2012.

The airline is also considering the lease of two 737-700s in time for peak operations over summer. In Jun-2012 AeroSvit will also take delivery of its first two Embraer E190 aircraft, which will be used as part of its upcoming summer expansion. As part of the airline’s longer term fleet renewal plans, it is expecting an additional five 737-800s to be delivered by 2015 as well as five Antonov An-140 aircraft.

While it appears AeroSvit is to significantly increase its capacity over the next six months, it may not need a large amount of extra aircraft right away. As with many other Eastern European carriers, AeroSvit underutilises its fleet in the winter months so is able to increase its fleet utilisation in the summer months to operate an expanded schedule.

At its base at Kiev Boryspil International Airport, AeroSvit accounts for about 37% of capacity followed by UIA with 24%. Despite being Kiev’s leading carrier, AeroSvit’s relationship with airport management has been tested recently. On 14-Mar-2012 the airport temporarily suspended AeroSvit’s services following late payment of airport charges. The airline later reached an agreement with the airport to pay a “major” part of its UAH6 million (EUR578,000) debt to the airport and agreed to prepay airport services to be received each day in the future.

Kiev Boryspil International Airport international capacity by carrier (seats per week): 21-May-2012 to 27-May-2012 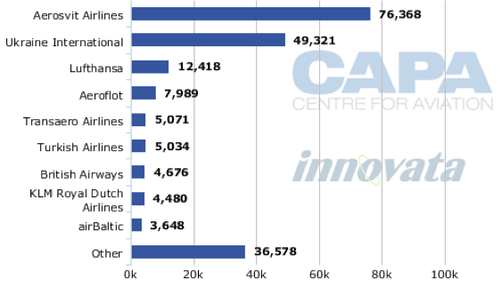 The carrier may see further changes later in 2012 or in 2013 with the potential privatisation of the Ukrainian Government’s minority stake in the carrier, although drastic changes are not likely considering it is already in private control. The carrier will continue to modernise its fleet while expanding its network in Eastern Europe and, to a lesser extent, into Southeast Asia.