Falls on global markets saw most aerospace stocks decline on Monday, with concerns raised over European sovereign debt and the pace of Chinese economic growth. Boeing had a mixed weekend: It won (along with General Dynamics) a US Supreme Court victory against the US Department of Defence, which was seeking USD3 billion over a cancelled military aircraft contract. However, more talk of possible delays to the B747-8F emerged, with some analysts suggesting Boeing could miss the deadline for initial deliveries by up to two months.

Air India also announced it is seeking "just compensation" for delays to the carrier's B787s. Air India has 27 B787s on order and has reportedly been seeking USD500 million to USD1 billion in damages.

Shares in Russia's United Aircraft Corp dropped 5.4% on Monday. The company is due to report its 2010 results shortly. The company recently delayed deliveries of the Sukhoi Superjet 100 to Russian national carrier Aeroflot, reportedly over production issues. 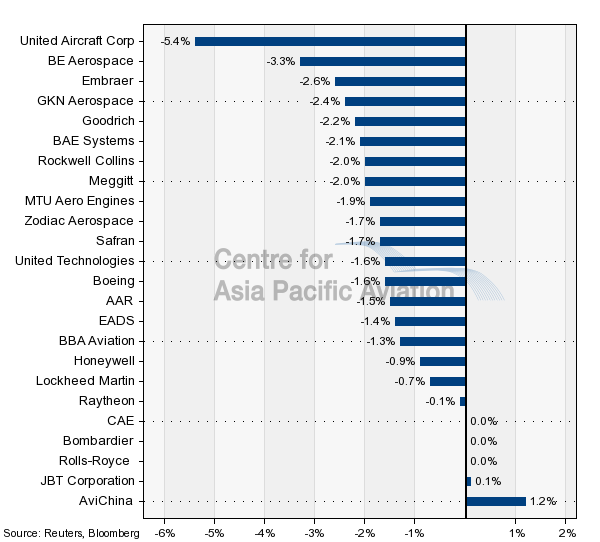