Mexican airlines Aeromexico and Volaris are sticking to their proclaimed strategies of deploying most of their capacity into international markets as the Mexican economy slowly rebounds from a sluggish 2013. Through the first eight months of 2014 each airline increased their international capacity and traffic significantly, betting that yields are stronger in international markets.

The competitive overlap between Aeromexico and Volaris on each airline’s top US transborder markets is not overwhelming, and Volaris has previously stated that it is targeting routes with a higher percentage of visiting, friends and relatives (VFR) travellers.

Aeromexico’s and Volaris’ rival VivaAerobus is also making a new transborder push during 2014, upping competition with Aeromexico and Interjet on some of its international services. It is tough to determine if the push is creating oversupply; but the international growth indicates Mexico’s airlines are attempting to counter weaker yields on the country’s domestic routes.

As pricing traction has evaporated within the Mexican domestic market during 2013 and 2014, Aeromexico and Volaris have set their sights on international markets in order to shore up yields.

Aeromexico has refined its domestic supply growth projections to 8% from previous growth targets of 9% to 12% for CY2014. Originally, it planned for overall capacity growth of 15% to 18% in CY2014, with 19% to 22% deployed into international markets. But with the domestic revisions, Aeromexico’s international capacity growth could increase slightly.

Aeromexico, which also operates long-haul trans-Atlantic and trans-Pacific flights to London, Paris, Madrid, Tokyo Narita and Shanghai, has 62% of its ASMs deployed in international markets and 38% on domestic routes. 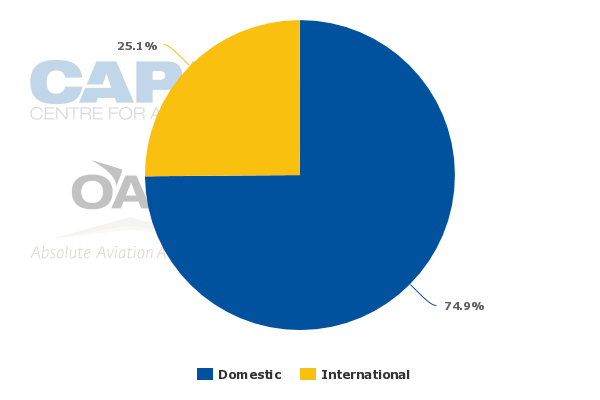 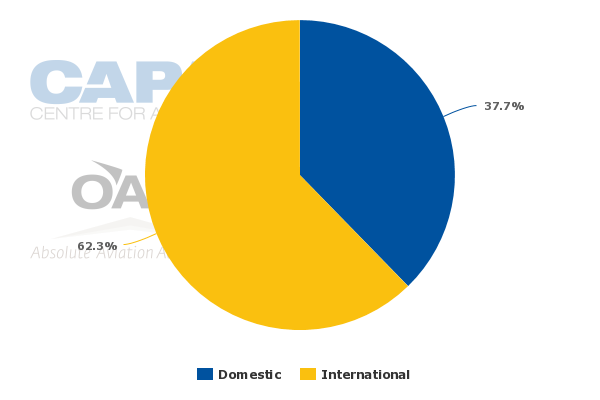 Aeromexico is adding frequencies to some of its US border flights during 2014 along with re-launching service from Monterrey to Houston (a route it dropped in 2011), where it squares off with VivaAerobus and United. Aeromexico’s other new international routes introduced in 2014 include Mexico City to Rio de Janeiro in Jun-2014 and planned Mexico City-Managua service in Dec-2014.

Aeromexico leverages its commanding presence at Mexico City Juarez International Airport – Mexico’s largest airport – for its international service. It presently (w/b 22-Sep-2014) holds a nearly 43% seat share at the airport according to OAG, and is also revamping its bank structure at the airport, increasing connecting banks from six to 12 now that there is more certainty in slot allocation at the airport.

The new connectivity offerings should make Aeromexico’s schedule more appealing to connecting passengers from international flights, and presumably shore up revenue for the airline.

Not surprisingly, all of Aeromexico’s top international destinations originate at Juarez, and the majority of its largest markets measured by seat deployment are in US transborder markets.

Data from CAPA and OAG show that for the week of 22-Sep-2014 to 28-Sep-2014 Aeromexico and Volaris only overlap on three of each airline’s top international routes measured by seats – Mexico City-Los Angeles, Guadalajara-Los Angeles and Mexico City-Las Vegas. 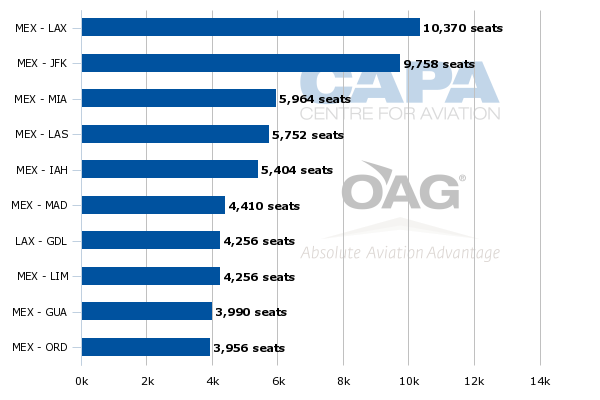 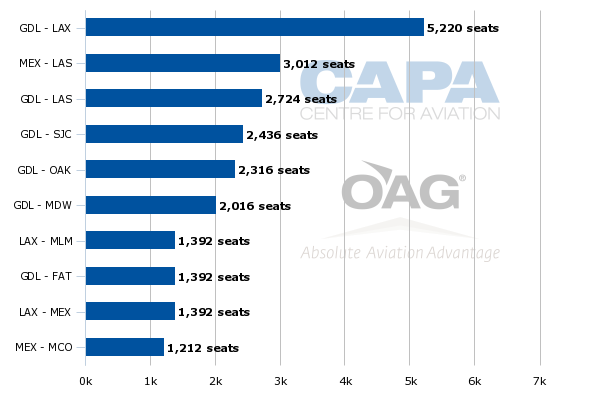 Given the slot restrictions at Juarez, and Guadalajara’s positioning as Volaris’ second largest base measured by seat deployment and its third largest based on ASM allocation, it is not surprising Volaris is leveraging Guadalajara in its international push. 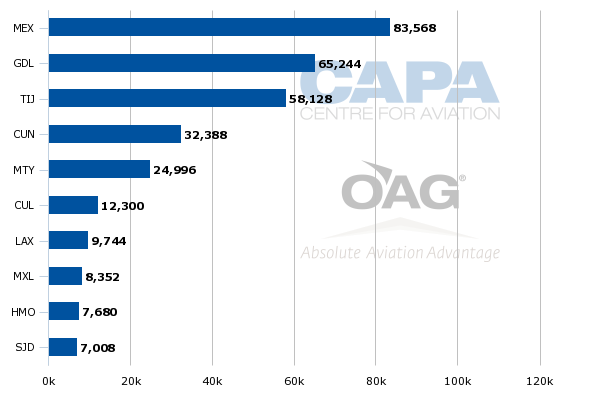 Guadalajara is Mexico’s third largest airport and the country’s second largest city, and is home to manufacturing facilities of several international firms. Volaris holds a 34% share of the system-wide seats deployed from Guadalajara and a 38% share of international seats offered from the airport.

The airport recorded 9.6% passenger growth from CY2012 to CY2013 to 8 million passengers. During the first eight months of 2014 Guadalajara charted solid passenger growth, which bodes well for its largest airline Volaris. 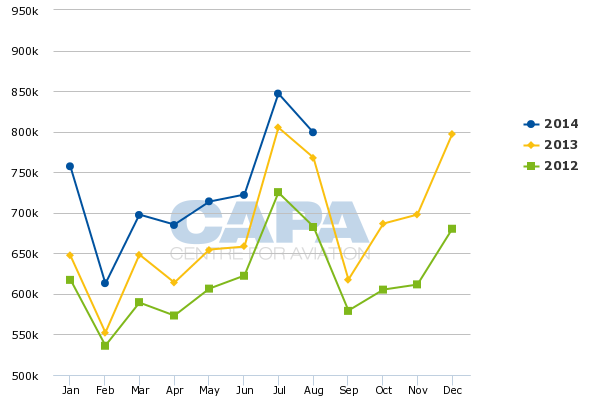 Volaris’ strategy in its US transborder markets (many of which originate in Guadalajara) is to target VFR traffic. The airline has concluded those markets have a lower level of competition given that some of Volaris’ Mexican competitors in the transborder market are aiming to capture a mix of business and leisure travellers.

Based on its traffic results for the first eight months of 2014, Volaris seems to be holding its own in international markets even with some slight competitive overlap, and perhaps the small decline in international load factor is intentional, as Volaris might be opting to trade some fall in load factor for higher yields.

VivaAerobus makes a transborder push after remaining on the sidelines

Its expansion is made possible by the addition of newer and more fuel-efficient Airbus A320s in 2014. VivaAerobus aims to shed its Boeing 737 Classics by YE2016. CAPA’s Fleet Database shows that VivaAerobus presently has five A320s in operation and 17 Boeing 737-300s.

As previously reported by CAPA, VivaAerobus is breaking United’s monopoly on the service from Houston to Cancun and Guadalajara, and faces competition from both Aeromexico and Interjet on flights from Monterrey to San Antonio and Las Vegas.

Is there a threat of overcapacity in the transborder market?

The push by three of Mexico’s airlines into international markets during 2014 is not a huge surprise as yields remained under pressure during 1H2014. During that time Aeromexico’s yields fell 13% and Volaris recorded a 15% decline.

The obvious question is whether the additional capacity being deployed in international markets will be yield accretive to those airlines hoping to deflect some of the lingering yield weakness in the Mexican domestic market.

Most of the route additions by Aeromexico, Volaris, VivaAerobus and to a lesser degree Interjet, seem logical. However, there is growing competitive overlap in the transborder space, which could make the effects of diversification by those airlines into international markets less desirable.

Absent the forecast rebound in the domestic market, Mexico’s four largest airlines could be encountering one another more frequently on international markets in future.