European airline shares were down marginally on Thursday (19-Aug-2010) as wider markets continued to decline. The markets suffered heavy losses due to weak US data, despite reports of improved UK retail sales and Germany's Bundesbank (Central Bank) raising its 2010 growth forecast after the German economy grew at its fastest pace in two decades in 2Q2010.

easyJet (-1.2%) was also down, despite stating that it is increasing its offering to corporate clients, by signing soft-benefit deals with customers and preparing to introduce a flexible fare for exclusive distribution through its global distribution system. easyJet currently offers one fare type, but for a premium a flexible fare will allow unlimited changes before the day of departure, however cancellations are not permitted. The new fares are scheduled for introduction in Sep-2010.

TNT (-1.7%) was the biggest decliner of the day, despite releasing a press release the day prior stating the company declared an interim dividend of EUR0.28 per ordinary share, that is payable, at the shareholder’s election, either wholly in ordinary shares or wholly in cash. The dividend will be payable as from 20-Aug-2010. 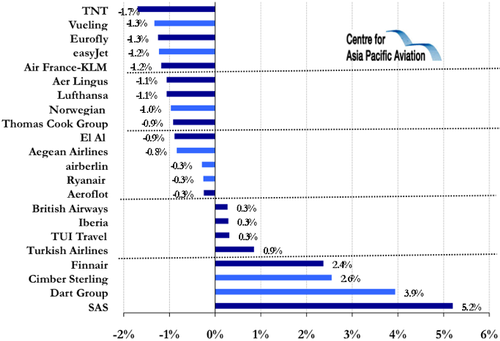