The lure for an airline to grow beyond its home market by targeting sixth freedom traffic is as old as the jet age: bygone Icelandic carrier Loftleidir ruffled feathers in the 1950s by carrying far more passengers than its local population while KLM in 1957 listed on the New York Stock Exchange, partially to quell nationalist fears it was taking too many passengers from the US.

Efforts to focus on sixth freedom traffic come and go: KLM has remained (upwards of 80% of its passengers transit its Schiphol hub) while Emirates has sprung up (now as the third largest carrier in the world). And, as Chinese and other north Asian airlines expand their roles, now carriers like Aeroflot are making new pushes into sixth freedom traffic.

Aeroflot's Moscow hub has strikingly similar geography to Helsinki, where Finnair is betting its future on sixth freedom traffic, while claiming a network that can rival those in Europe and the Middle East.

It is early days for these experiments in sixth freedom traffic and whether it will merely be a filler or major source of growth will depend on its (and its home airport's) own efforts and of their competition. A positive is that the risk is relatively minor. But it needs pro-active partners to support the strategy.

Sixth freedom traffic has a simple equation – when realised

The beauty of having sixth freedom traffic is that the basics – empty seats – are already in an airline's inventory. Assuming a solid geographic centrality, the most significant barrier to entry is realising that this potential exists. Small scale sixth freedom markets can be fairly easily created by marketing them and creating the appropriate technological connections to do so.

Price is typically the driver and what marketing is needed: by the time a carrier has third and fourth freedom traffic on a flight covered (ideally meaning the flight is profitable) the leftover seats can be sold fairly cheaply as only incremental costs (namely fuel for the weight of the passenger and luggage) need to be covered.

Airlines looking to have more significant sixth freedom traffic will start to coordinate schedules, offer more formal marketing and even look into what if any passenger amenities are needed. Quite a few jumps higher are carriers like Emirates, Etihad, SIA and KLM with over-riding sixth freedom traffic. For them, hub construction and scheduling waves are an art, although the rudimentary basics are the same.

What becomes alluring about sixth freedom network traffic is its exponential growth. Adding one flight gives a range of new connecting possibilities, delivering a scale that not only asks for more flights but also starts to make it hard for others to compete.

Of course, inertia plagues the industry, as do feelings that airlines are fighting for survival on a day-to-day basis, leaving few opportunities to plan for the future and see what others are doing. So it surprising, but also not, that some airlines are only now starrting to look at sixth freedom connections while others are not yet in the space.

Chinese carriers in recent years have taken a sharp interest in sixth freedom networks. Other markets like India have remarkable potential thanks to their geography, once/if matters settle down. And new markets, such as a Mongolia, could open up depending how they grow.

If airlines themselves do not see the light, increasingly smart government and tourism authorities will take the initiative. A supportive Abu Dhabi Airport played an important role in Garuda Indonesia's switch from Dubai to Abu Dhabi and a partnership with Etihad that should, over the long term, deliver more passengers. While airports market to airlines, they also market to other airports, hoping to sandwich in a new carrier or more capacity.

Singapore Changi airport is working extensively with Tiger Airways to facilitate connections, a concept the carrier once shunned, but one which is seen increasingly as a highly valuable opportunity. Changi has long been integrated into the Singapore economy and the tourism dollars stopover passengers bring – so much so that Changi even offers certain airlines' passengers spending coupons at the airport. Other cities, like Dubai, almost exist because of stopover traffic.

Even the sedate Chinese have picked up on the trend, dropping their stringent entry requirements and allowing transit passengers (from major nationalities) in Beijing and Shanghai 72-hour stays without visas. That aligns with Chinese carriers' ambitions to be sixth freedom operators, but news of the 72 hour visa-free visits was accompanied with projections of how thousands of additional passengers and millions of spending the cities would see.

Aeroflot in recent months has been stepping up its marketing of sixth freedom traffic flows, namely from Asia to Europe via Moscow. Being at the eastern periphery of Europe, Aeroflot's hub is conducive for traffic to/from the east as otherwise it is necessary to backtrack, and by quite a few hours is from the western-most parts of Europe.

The geography of Aeroflot's hub at Moscow is similar to Finnair's hub in Helsinki. While Moscow is further east, it is not so much further south that it requires a strong diversion from the shortest possible theoretical flight path, giving Aeroflot an advantage for passengers looking for short journeys, provided connecting times are short, something the Middle East network carriers are strong in achieving.

Moscow's geography also means Aeroflot, unlike European competitors (with exceptions, like Finnair), can operate into Asia with A330-300s rather than needing to spend more to acquire A330-200s in exchange for range/payload or up-gauge to heavier widebodies. (Aeroflot does, however, elect to operate A330-200s into thinner Asian markets.)

Aeroflot is poised for growth, with approximately 40 long-haul aircraft on order, most of which will be used for expansion rather than replacement.

It is the 20th largest international carrier based on seat capacity. It is larger than well-known Etihad as well as Asiana and China Eastern, two other names to watch for growing sixth freedom traffic. Aeroflot is a few rankings below Thai Airways and Swiss.

Its large domestic network and organic interest in O&D services to Russia gives Aeroflot a core market, further advantaged by its relatively low cost base.

In terms of Aeroflot's scale, it has approximately half the European destinations of Air France and Lufthansa, but more than KLM and twice as many as Finnair. In Asia-Pacific it is the largest behind Lufthansa while being relatively light elsewhere in the world. 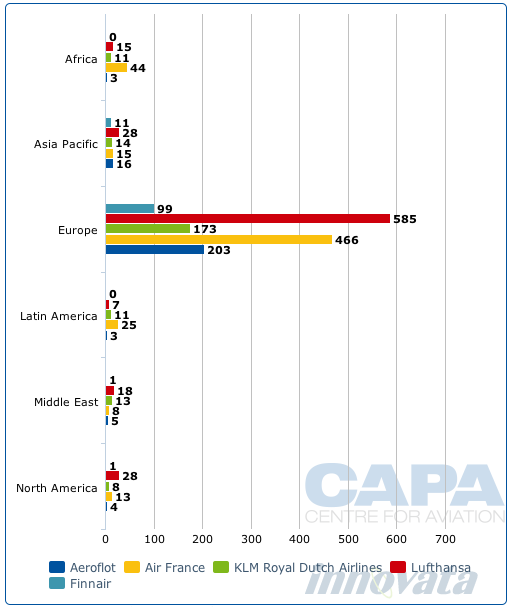 Compared to Middle East network carriers, Aeroflot has a strong advantage in Europe (203 destinations versus the next largest, 33 from Emirates) while being comparatively weak in Africa, Asia-Pacific and the Middle East.

It rivals the Middle East network carriers in destinations in Latin America and North America. 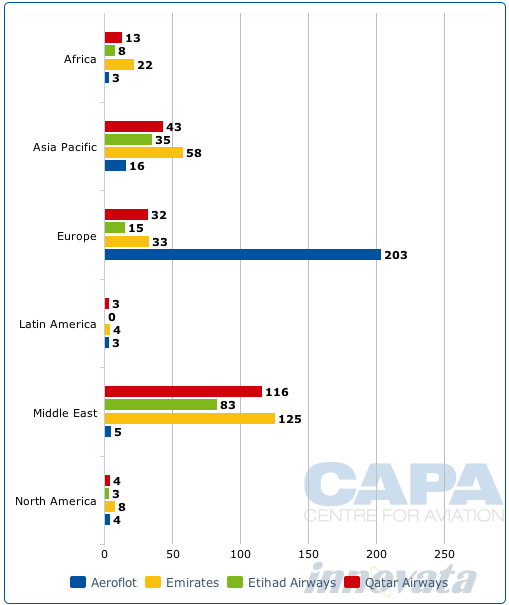 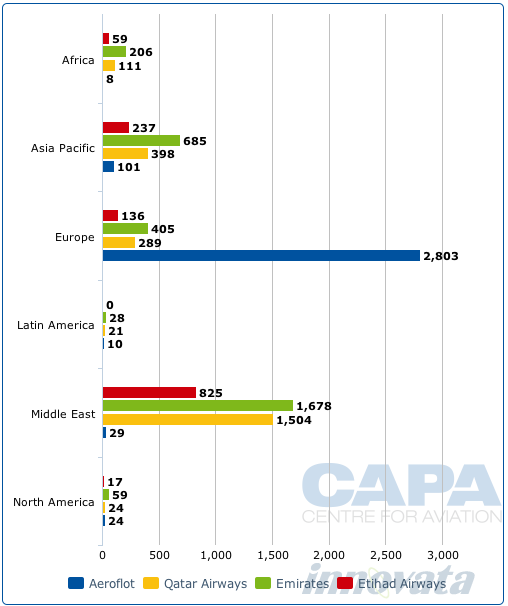 Aeroflot is a smaller competitor, but like the Middle East carriers, close in Latin America and North America. 2013 could see this erode as Turkish Airlines looks to significantly expand in North America. 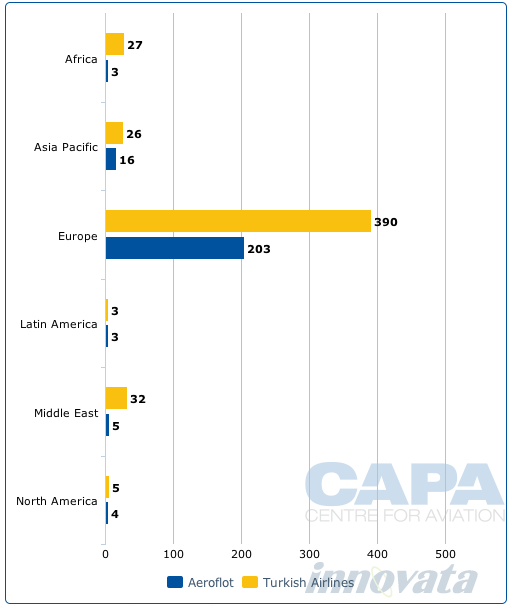 Aeroflot's frequency advantage is smaller than its destination advantage. 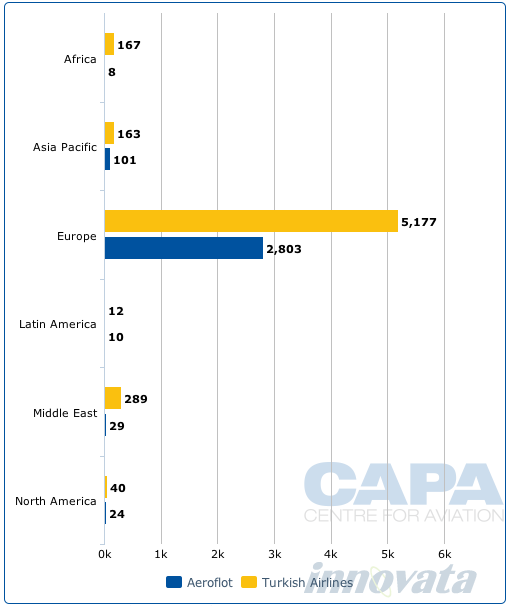 Sixth freedom is not for everyone; LOT and Royal Brunei have been obliged to withdraw

For now, the sixth freedom initiatives at Aeroflot are relatively minor. They will likely grow as the carrier expands, taking advantage of its home markets. Other carriers have not fared so well as far as sixth freedom traffic is concerned. Weakness in long-term sixth freedom profitability is often tied to a weak home market. LOT and Royal Brunei Airlines are two such examples.

Until a 2011 pull-back, Royal Brunei Airlines had operated an extensive transfer network, but with it almost entirely loss-making and providing no strategic benefit to RBA owners, the government, it was whittled away. As CAPA previously wrote:

RBA’s long-haul network was almost entirely transfer traffic and loss-making; the government was effectively subsidising traffic that did not benefit the country and decided to end that standing. “Our ownership, and rightly so, doesn’t see any future in incurring losses on routes where over 90% of the traffic doesn’t connect to Brunei” as an origin or destination, (Chairman) Mr Mannion said. “There’s no strategic rationale at all for it. We’re now operating in an environment where our route network needs to stand much more on its own two feet.”

Although RBA would like to increase the percentage of local traffic on its long-haul flights, Mr Mannion does accept that transfer passengers will comprise the far majority. “I think 20% [local] would be a terrific target but I very much doubt if you could do more than that,” he said. “Let’s be realistic. Brunei is a small market. There are only 400,000 people there. In order to launch the kind of international operations we have, there is always going to have to be a significant reliance and dependence on transfer traffic, and we don’t apologise for that.”

LOT Polish Airlines in 2011 initiated an east-meets-west strategy to connect Asia with Russia, the CIS and Europe, using its Warsaw base a hub for the region, providing faster theoretical connections that airlines further west in Europe. At the start of the strategy, about 10% of the carrier's passengers were in transit, but LOT expected this to double.

LOT tested the waters with a service to Vietnam's Hanoi, where the carrier reported that about 75% of tickets were sold in Europe but outside Poland, making the route heavy on transfer traffic. But with little premium traffic – the route was almost entirely leisure – LOT withdrew, as it hinted it may due to its larger 787 (to replace the 767 that opened Hanoi) being too much aircraft for a leisure-heavy route. (Finnair may face similar challenges with its recently-announced seasonal service to Hanoi.)

Greater deterioration in Europe's economy affected LOT's business, and the carrier, according to local reports, may look to shed about half its fleet. As with RBA, a lacklustre local economy that does not give high-yielding third and fourth freedom traffic places greater pressure on sixth freedom traffic to be discount – often to the point of unprofitability.

Sixth freedom traffic either needs to be complementary to a strong, over-riding local strategy, or a carrier's sixth freedom network must focus on a niche (such as Air Astana to West Asian/CIS destinations). Alternatively – and now most unlikely – it should be of immense Emirates-like scale. Each passing day makes it more challenging to gain a large scale, but plenty of growth is left if the right combination of factors occur.

For most airlines, gradual increasing – or starting – of sixth freedom traffic will be lucrative enough. Aeroflot will need to be working closely with its home airport, its government and its tourism authorities to exploit this markeet segment effectively.

It sounds easy and there are now several useful case studies. But the crossover from concept to implementation is not always so easy.