The Aeroflot Group more than doubled its operating profit for 3Q2015 and 9M2015. The weakness of RUB served to inflate both revenue and costs, but these two factors cancelled each other. As with other airlines, low fuel prices helped Aeroflot's results, but the underlying driver of its profit improvement was its growing market share and the positive impact this had on unit revenue.

Already Russia's largest airline group, it is benefiting from the weakness of domestic rivals and capacity cuts in Russia by foreign competitors. It is no longer buying a majority stake in Transaero, but is to take over some of its bankrupt rival's routes and this will further extend its market leadership.

Moreover, a successful first nine months for its LCC Pobeda and a plan to merge three of its regional airlines under the Rossiya brand help to sharpen Aeroflot's multi-brand strategy, making it the leader in each main market segment.

For 9M2015, revenue was up by 31% to RUB309,510 million and the operating result more than doubled to RUB36,808 million, with a 6.1ppt margin increase to 11.9%. This compares favourably with the 10.5% margin recorded for 9M2015 by the most profitable of Europe's big three legacy airline groups, IAG. Adjusting for non-recurring expenses, the 9M operating result was RUB41,029 million, giving an adjusted operating margin of 13.3%.

The increase in 9M operating profit was mainly driven by revenue growth, in particular due to traffic growth, but lower fuel prices were also important. The weaker RUB versus USD and other currencies served to inflate both revenue and costs, with the two effects almost equal.

See related report: Aeroflot back in operating profit in 1H. Transaero acquisition to take its market share close to 50% 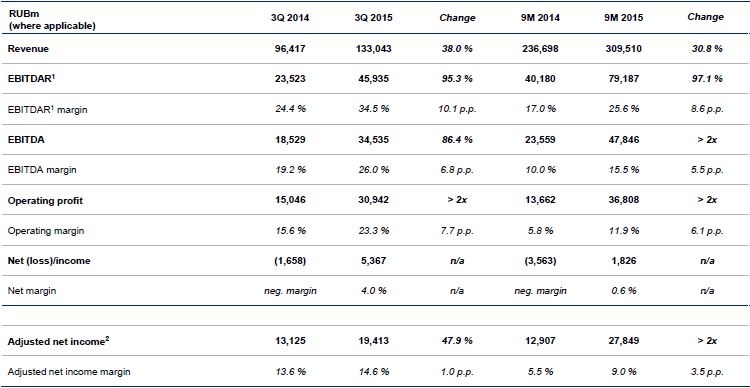 Overall, the group's passenger numbers grew by 12.3% in 3Q2015, compared with a 0.8% reduction in the Russian market as a whole. The group outperformed the market both on international routes, where its passenger numbers fell by 11.7% compared with a fall of 14.9% in the market, and on domestic routes, where its 35.4% increase was much higher than market growth of 19.8%. 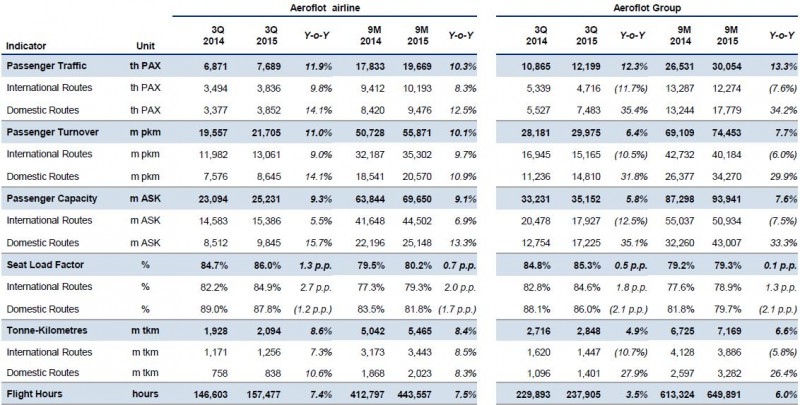 Continued growth in Asia, but cuts in other international regions

Although the Aeroflot Group cut its international capacity in 3Q2015, it continued to grow in Asia, with an ASK increase of 5.8% and a 4.4ppt increase in load factor. Asian activity benefited from reduced competition and increased international transfer traffic through Aeroflot's Moscow Sheremetyevo hub.

Revenue up 38%, boosted by weak RUB

Group revenue increased by 38.0% in 3Q2015, much faster than the 5.8% increase in ASKs. This was an acceleration in revenue growth from the 5.8% increase reported in 1H2015, in spite of slower capacity growth, thanks to a further weakening in the value of RUB versus international currencies.

The weakening of the RUB against USD and other international currencies boosted revenue by RUB51,579 million in 9M2015, accounting for 71% of the incremental revenue against the same period last year. Without this foreign exchange boost to revenue, CAPA calculates that 9M revenue growth would have been 9.0%, still faster than 9M ASK growth of 7.6%. 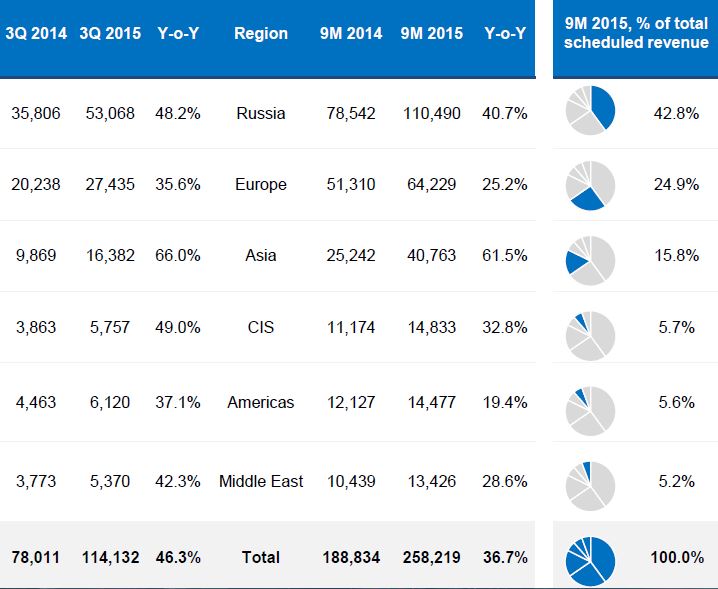 Revenue per ASK (RASK) increased by 27.2% year on year in 3Q2015, mainly driven by a 26.5% increase in yield (passenger revenue per RPK) and also by the small load factor gain noted above.

Yields benefited from the positive impact in RUB terms of international tickets priced in strong currencies (international yield grew by 40.8%), in addition to what Aeroflot called active revenue management. For 9M2015, RASK was up 18.5%.

Operating costs increased by 25.5% in 3Q2015, faster than the growth in ASKs, but less than revenue growth. Fuel costs increased by 7.3% and non fuel costs increased by 33%. The weakening of RUB against USD in particular had a negative impact on costs incurred in USD when translated into RUB (such as fuel, operating leases, maintenance, and aircraft, traffic and passenger service costs). Excluding foreign exchange movements and non-recurring expenses, costs were down by 1.9%. In 9M2015, currency movements accounted for RUB51,736 of additional cost, more than the total cost increase. 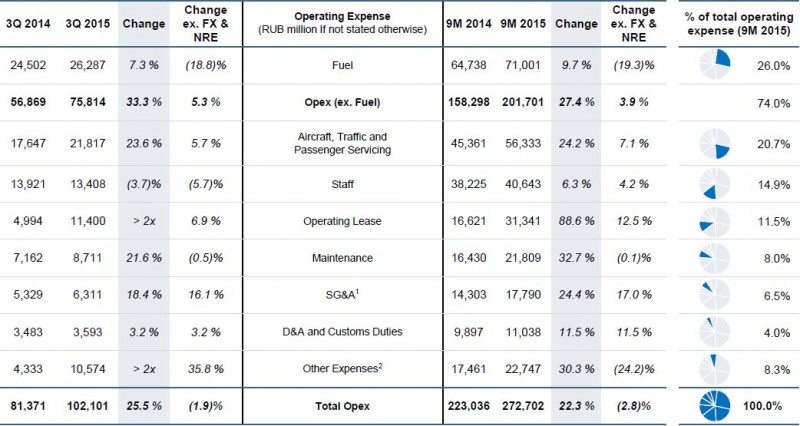 1 Includes sales and marketing expenses and administration and general expenses.
2 Other expenses include VAT under code-sharing agreement with Rossiya Airlines and fuel excise reimbursement during 6M 2015
Source: Aeroflot

As the only LCC in Russia, it seems likely that Pobeda has mainly grown the market. Data from Aeroflot concerning load factors at Sochi, where all three of Pobeda, the parent airline and the group's regional operation are present, support its assertion that Pobeda has helped the group to segment the market without cannibalising sales from its existing airlines.

Until now, Pobeda's network has consisted entirely of domestic routes, but its first international routes, daily services from Moscow Vnukovo to Bratislava, Vienna and Milan Bergamo, are set to launch in Dec-2015. Pobeda has also requested slots for a daily service to the Belarus capital Minsk.

The Aeroflot Group is merging its three regional airline brands into one, bringing together the operations of St Petersburg-based Rossiya, Donavia (based at Moscow's Domodedovo and Vnukovo airports and Orenair (which focuses on Rostov-on-Don, Krasnodar, Sochi and Mineralnye Vody). The three accounted for 7.4 million passengers, or 25% of the group's total, in 9M2015. Their average load factor was 75.8% (75.0% on domestic routes and 77.4% on international routes).

They are to unite under the name Rossiya, being the brand used by the largest of the three regional operators. This consolidation still leaves smaller regional operator Aurora as a separate brand based in the far east cities of Vladivostok, Khabarovsk and Yuzhno-Sakhalinsk. 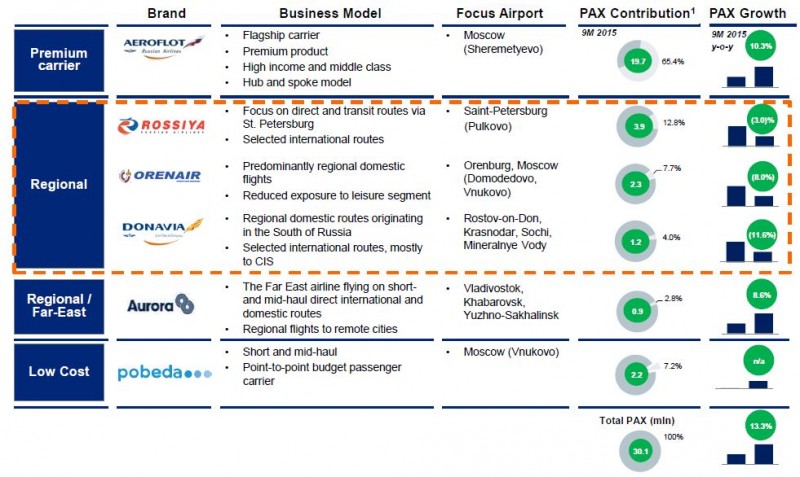 1 PAX contribution as of 9M 2015. Absolute number of passengers in million in green circle
Source: Aeroflot

The 'new Rossiya' will operate regional routes, with selective international destinations, and position itself mid market in price terms. Currently, the combined network of the three constituent airlines consists of 90 destinations, of which 48 are domestic and 42 international. Moscow Vnukovo and St Petersburg will be the prime hubs of the new operation, but it will also fly from other regional airports in Russia.

Rossiya to take routes, aircraft and employees from Transaero

Rossiya will assume some destinations from Transaero and a number of aircraft from the suspended airline's lessors. The current fleet of the three Rossiya airlines has 64 aircraft (as of Sep-2015), including six widebodies (three 767 and three 777) and 68 narrowbodies. Six Antonov 148 aircraft will be phased out of the narrowbody fleet, but 37 A320 family aircraft and 11 Boeing 737s will be retained. Aeroflot is negotiating for the new Rossiya to take around 24 widebodies from Transaero (five 777s, five 767s and 14 747s), but this is still to be confirmed.

Transaero's AOC was suspended on 26-Oct-2015 after the collapse of various attempts to rescue it from bankruptcy, including by Aeroflot (at the direction of the Russian government) and then by S7 shareholder Vladislav Filev. During Sep-2015 and Oct-2015, the Aeroflot Group provided financial and operational support for the carriage of 1.9 million Transaero passengers in order to help to smooth out the impact of its former competitor's bankruptcy.

Rather than acquiring a majority stake in the whole of Transaero, as was previously planned, Aeroflot is now effectively cherry picking from its routes and aircraft, thereby reducing the risks of proceeding with the aborted acquisition. Aeroflot has avoided both any need to assume Transaero's financial liabilities and also to cut its network and work force.

See related report: Transaero and Aeroflot Part 1: The airlines have a 70% overlap but the government won't want cuts

Aeroflot has assumed slots and designations for 56 of the 141 international routes previously operated by Transaero, including new routes to six destinations in Kazakhstan cities in Russia's far east and additional frequencies to some congested airports in Europe and Asia. In addition to the 24 Transaero aircraft noted above, the Aeroflot Group has committed to take up to 10 Boeing 737s from the Transaero fleet. It has already signed an MoU with lessor Sberbank Leasing for 14 aircraft and is negotiating with other lessors in respect of 14 other aircraft.

The group also plans to employ around 6,000 former Transaero employees, mainly for the new Rossiya airline. It has also reportedly appointed Dmitry Saprykin, who had been sent from Aeroflot to be CEO of Transaero in Sep-2015, as CEO of Rossiya. After the hiring of Transaero staff, Aeroflot expects to maintain current levels of labour productivity in the group. Moreover, Deputy CEO for Strategy and Alliances Giorgio Callegari told analysts on a conference call to discuss the 3Q2015 results that it was "determined to follow a strategy of serving only points that can be profitable".

Aeroflot's 3Q2015 and 9M2015 results demonstrate the group's ability to adapt to the changing market environment that it faces, even if lower fuel prices have also lent a helping hand. Given the weakness of demand on international routes, it has successfully and profitably switched capacity to domestic routes.

Of course, it helps that Aeroflot is the largest airline group in Russia (with a market share of 35% of passengers in 9M2015, up from 30% in 9M2014) and that its biggest rival, Transaero (13% of passengers in 9M2015), has gone out of business. Moreover, Aeroflot has escaped from buying Transaero, a transaction with which Aeroflot never appeared entirely comfortable, while gaining some of its routes, aircraft and staff. It has also gained political points by supporting Transaero passengers in the aftermath of its bankruptcy.

The new Rossiya should provide cost saving opportunities and a more focused brand for the group's regional airline activities.

The current period of turmoil in the Russian market is strengthening Aeroflot's position.