The Aeroflot Group suffered a 31% drop in its operating profit and reported a net loss in 3Q2014, the seasonally strongest quarter. Although the net result was weighed down by foreign exchange movements and non-recurring items, the underlying profitability of the Group suffered due to RASK falling while CASK increased.

Demand on international routes has suffered as a result of the geopolitical backdrop, forcing Aeroflot to focus its growth in the domestic market.

Geopolitical events also led to the cessation of Aeroflot's fledgling LCC subsidiary Dobrolet in Aug-2014. However, the Group has acted rapidly in launching a new low cost venture, Pobeda, which started operating between Moscow Vnukovo and Volgograd this week.

For 9M2014, revenues grew by 6.5% to RUB236,698 million (EUR4,936 million), operating profit almost halved to RUB13,662 million (EUR285 million) and the net result fell to a loss of RUB3,563 million (EUR74 million) from a profit of RUB17,237 million a year earlier. Adjusted for foreign exchange fluctuations related to finance lease revaluation and non-recurring provisions, the operating result was still 43% down year on year and the net result, while positive at a profit of RUB12,907 million, was still 36% below last year's adjusted result. 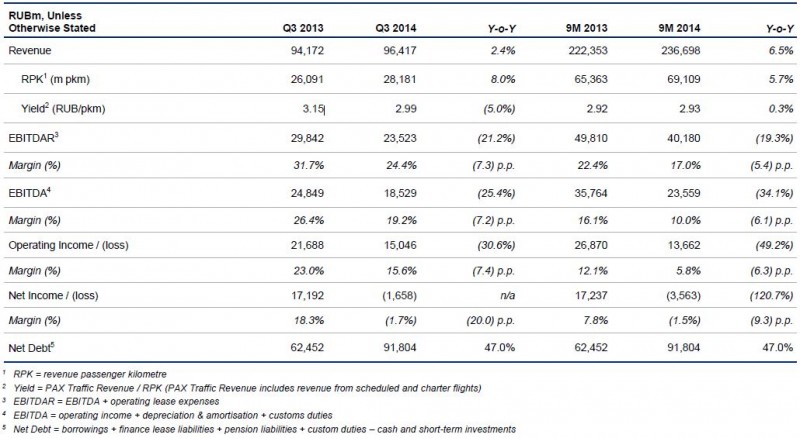 On international routes, the Group's capacity growth was muted (+2.4%) and its load factor fell (see table below), reflecting the geopolitical environment.

The growth was also driven by the parent company, JSC Aeroflot, whose ASKs were up by 10.5% in 3Q, much faster than the Group's 6.9% increase. 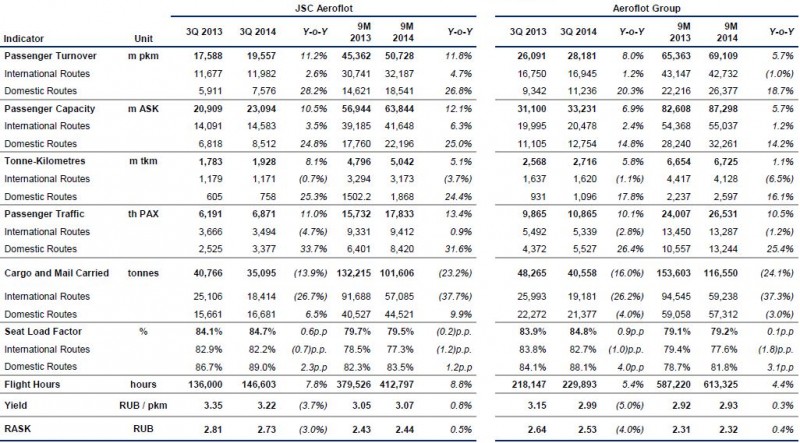 Capacity growth in Europe, Middle East and Asia was relatively high, but was not matched by traffic growth and so load factor fell in all three regions (see chart below). The international region where the Group's capacity growth was slowest, and where load factor was almost stable, was North and Central America.

Group revenue increased by 2.4% in 3Q2014, less than the 6.9% increase in ASKs. This deterioration in revenue growth from the 9.4% increase reported in 1H2014, in spite of higher capacity growth, owed much to the fall in the value of RUB versus international currencies, but also to weaker demand.

Passenger revenue (scheduled plus charter) per ASK fell by 6.7% year on year in 3Q, reversing the 3.3% increase reported in 1H and taking the 9M passenger RASK development to a drop of 2.5%. This reflected the weakness of passenger yield in 3Q, particularly on international routes, only partly offset by the load factor gain noted above.

For 9M214, CASK grew by 8.0%, while RASK fell. After stripping out the impact of foreign exchange and non-recurring items, 9M CASK still increased by 4.7%. 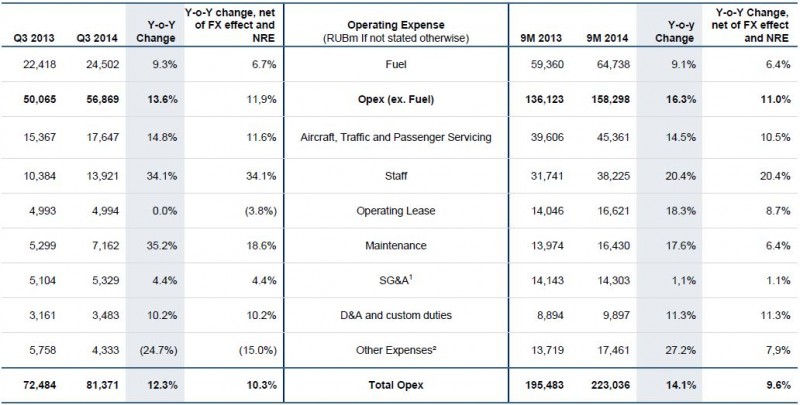 On 04-Aug-2014 Aeroflot suspended the operation of its low cost airline subsidiary Dobrolet as a result of economic sanctions imposed by the European Union. The EU objected to the Russian annexation of the Crimea region of Ukraine and to Dobrolet's operation on the route Moscow to the Crimean city of Simferopol. Leasing, repair and maintenance services and airplane insurance agreements were annulled, as well as the provision of aeronautical information, effectively grounding Dobrolet.

Dobrolet had originally planned to launch with Moscow-St Petersburg, but delayed the planned start of this route until late 2014, reportedly due to a disagreement over airport fees. Its original plans also did not anticipate operating any international routes until 2016, but Dobrolet launched with the Simferopol route on 11-Jun-2014. It seems that the influence of the Russian government, majority shareholder in Aeroflot, was felt on Dobrolet's route decision making.

At the time that its operations were suspended in early Aug-2014, Dobrolet had also started to sell tickets for a number of domestic Russian routes that had not yet commenced operation. These were Moscow Sheremetyevo to Volgograd, Samara, Perm, Ufa, Surgut and Ekaterinburg, which were due to commence operating in Aug-2014, and Moscow Sheremetyevo to Kazan, due for Oct-2014.

Aeroflot's new LC subsidiary, Pobeda, began operations on 2-Dec-2014 with a daily service from Moscow Vnukovo to Volgograd. It plans to start daily flights from Moscow to Yekaterinburg, Samara, Perm, Belgorod, Tyumen and Surgut in December, with one-way fares starting at RUB999 (not including taxes and fees).

The concept behind Pobeda is essentially the same as for Dobrolet: a low cost carrier with fares at a 20% to 40% discount to "traditional" airlines in Russia, aimed at price sensitive customers.

It is differentiated from Aeroflot's core product not only through lower fares, but also through an unbundled approach to pricing, the use of direct/on-line sales channels and operating from Vnukovo, rather than Aeroflot's Sheremetyevo hub. Dobrolet had operated from Sheremetyevo, but this had never been intended to be its permanent base.

Like Dobrolet before it, Pobeda operates Boeing 737-800 aircraft with 189 seats. It expects its fleet to consist of four aircraft, operating seven routes by the end of 2014. Dobrolet had planned eight aircraft and 11 routes by the end of this year, so Aeroflot's LCC plans have slipped a little, but it has acted quickly in relaunching them. Looking further ahead, Pobeda is aiming for 10 million annual passengers, 37 aircraft and 47 routes (including international) by 2018.

The challenge to Aeroflot's LCC operation that arose from the EU sanctions was a strong test of its commitment to the concept in addition to its sense of national pride. Group CEO Vitaly Saveliev, who is also Chairman of the LCC, said in a press release: “The name Pobeda (Victory) is directly related to the upcoming anniversary of the Great Victory and symbolizes our common victory inevitable over those difficulties and external challenges faced by our country and our people this year."

The opportunity afforded by regulatory change permitting the LCC concept to thrive in the Russian domestic market is one that Aeroflot could not afford to miss. With no other LCCs yet operating in this market, it was important for it to retain its first mover advantage.

The ups and downs of being Russia's national champion

As Russia's airline sector national champion, still 51% controlled by the Russian government, Aeroflot has experienced some ups and downs.

It was given the chance to lead consolidation of the domestic airline industry in 2011 and now to lead the development of the LCC model in Russia. The flipside to this is that the state's desire to provide air links to the newly annexed Crimea inadvertently led to a significant setback in Aeroflot's ability to take its chance in the low cost sector. Moreover, the weakening of demand on the Group's international network owes much to the Russian government's geopolitical influence.

While treading a careful line on political matters, Aeroflot must not lose sight of the fundamentals. This means reversing this year's trend of RASK growth lagging CASK growth. Political temperatures fluctuate; costs are immutable.