Aer Lingus is positioned between the LCCs and the full service carriers, styling itself as ‘Ireland’s civilised airline’, but is this a sustainably profitable niche or just an attempt to make a virtue out of a necessity? It lacks the brand and product strength, network and frequent flyer programme to be a major network carrier and does not have a low enough cost base to be a genuine LCC. Its creditable profit recovery since 2009 owes more to market-driven unit revenue recovery, albeit aided by some intelligent management decisions, than it does to equally forceful action on unit costs.

Any slump in unit revenues, whether resulting from weak demand or over-supply in the market place could threaten its now well-established profitability. Assuming Aer Lingus does not end up in the hands of Ryanair, it may need to reconsider its strategy of avoiding the global alliances in the longer term, although its strong balance sheet should remain a good insurance policy in the near to medium term.

The growth in Aer Lingus’ pre-exceptional operating profit was mainly due to a benign yield environment. Total capacity was virtually flat (ASKs +0.5%), while traffic grew 3.4%, helping to support yield per passenger (+7.0%). Exceptional costs totalling EUR26.5 million meant that pre-tax profit fell by 52%, but the underlying improving trend was reflected in management’s proposal to increase the dividend from 3 cent to 4 cent per share. With net cash up from EUR318 million to EUR377 million and a gross cash pile of EUR909 million, Aer Lingus' balance sheet looks to be in rude health.

Since Christoph Mueller’s appointment as CEO in 2009, Aer Lingus has seen operating profit recover and stabilise after heavy loses in 2008 and 2009. In addition, Aer Lingus has consolidated its cash position, putting a stop to the haemorrhaging that took place between 2006 and 2009, when it consumed EUR537 million in cash over three years. 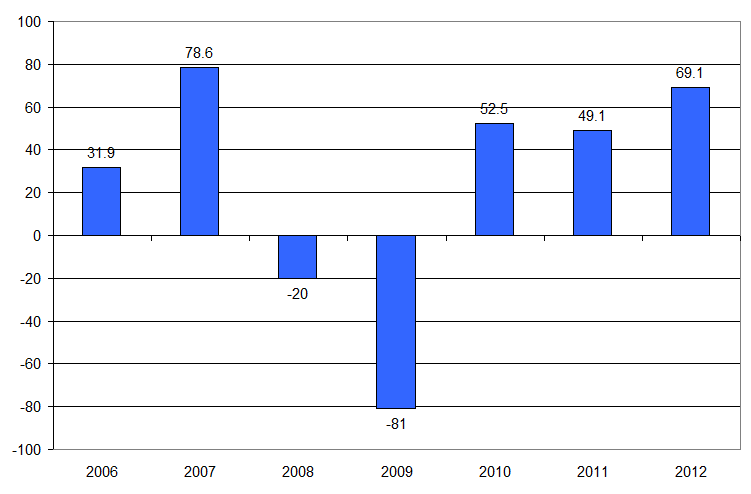 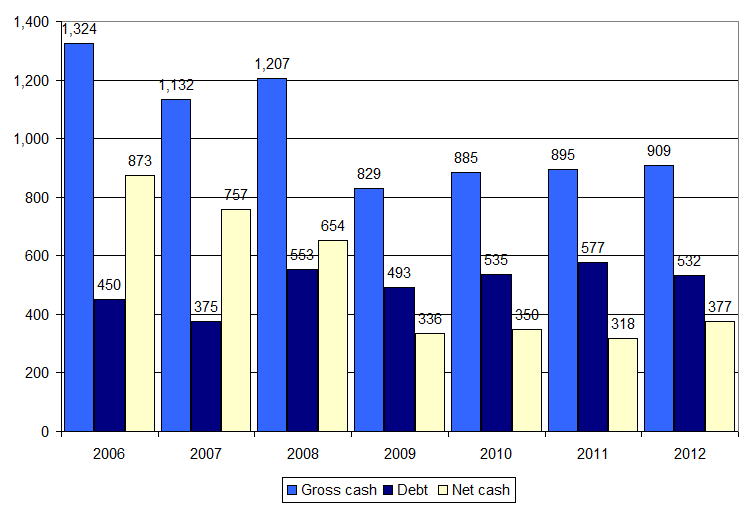 2012 saw the highest number of passengers flown on Aer Lingus services in a single year, with growth of 3.9% to 10.8 million (including Aer Lingus Regional, operated by Aer Arann, and the Madrid-Dulles codeshare with United Airlines). 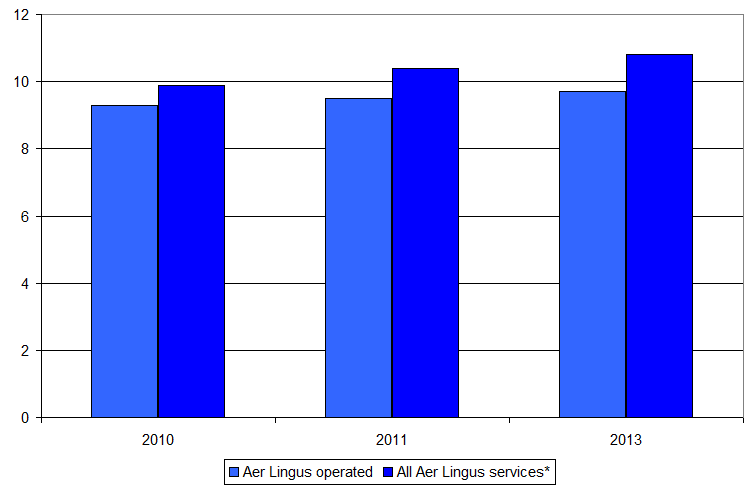 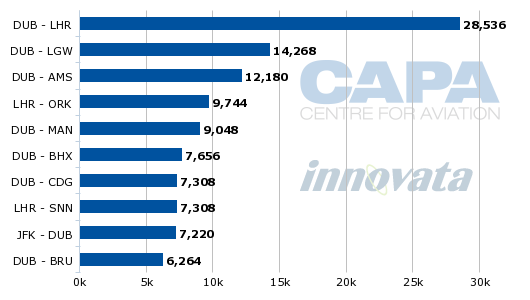 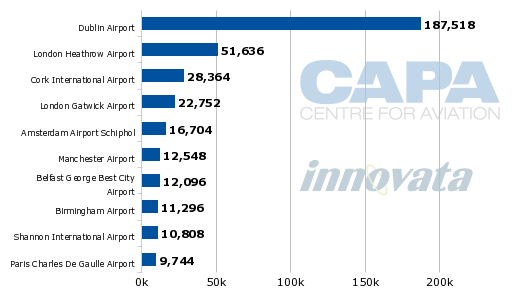 Total revenues grew by 8.2% in 2012 to reach EUR1,393 million, driven by a 1.5% increase in passenger numbers and a 7.0% increase in yield per passenger. Aer Lingus remains a predominantly short-haul carrier, with 59% of its 2012 revenues deriving from short-haul fares. Nevertheless, long-haul fare revenue grew by almost 20% to reach one quarter of total revenues in 2012 and transatlantic capacity grew by 15%.

This perhaps reflects the success of partnerships with United and JetBlue and the attractions of US customs pre-clearance at both Dublin and Shannon.

Yields per passenger grew 7% in 2012, reflecting tight capacity management both by Aer Lingus and in the market place at large. Yield growth was particularly strong on long-haul (up 9.1%). Short-haul yield per passenger grew by 3.8%, still healthy, but more modest compared with long-haul and the 6.5% increase enjoyed by rival (and would-be owner) Ryanair in the nine month period April to December 2012.

Analysis of fare revenues and yield per passenger 2011 and 2012

In 2012, approximately 23% of Aer Lingus’ total long-haul passenger traffic either connected from, or to, partner airlines services ( up from 18.5% in 2011). Interlining revenues and passenger volumes continued to grow, increasing by 8.8% and 5.5% respectively in 2012.

Operating costs (before exceptional items) grew by 6.9%, slower than the growth in revenues, in spite of a 24% increase in fuel costs. Staff costs grew by 2.4%, mainly due to headcount growth as wages remained frozen in the ‘Greenfield’ cost saving programme.

Restructuring provisions in 2012 are costs associated with the closure of hangar maintenance at Shannon and the Greenfield programme
Source: Aer Lingus

In 2012, Aer Lingus exceeded its savings target under its 'Greenfield' cost reduction programme, with a further EUR19.9 million to add to the cumulative total of EUR84.3 million achieved by the end of 2011. This brought the overall total to EUR104.2 million, ahead of the EUR97 million goal for the three year programme.

As with all such cost savings programmes initiated by company management teams, the achievement of targets is impossible to verify from the outside, since the onlooker does not know how much costs would have amounted to without the programme. Nevertheless, such programmes are a signal, both to the workforce and to shareholders, that management places a high priority on cost control and Aer Lingus says that it will continue to pursue cost saving opportunities even though the formal Greenfield programme has come to an end. 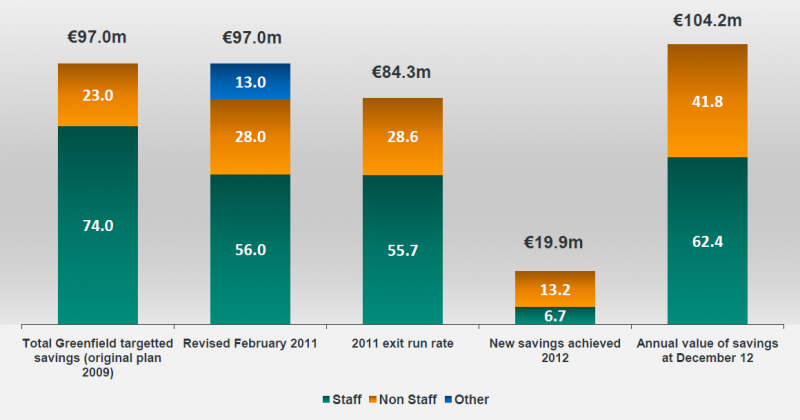 Ryanair’s current (third) attempt to acquire Aer Lingus demonstrates how keen its CEO Michael O’Leary is to buy Ireland’s former flag carrier. Ryanair has offered what it calls “radical and unprecedented” remedies to the EU competition authorities in an attempt to gain approval for the deal. Even with these remedies, it is not certain that EU approval will be achieved, given the dominant position that the merged company would enjoy in many markets.

Moreover, given also that the Irish government, owner of a 25% stake in Aer Lingus, has repeatedly (since Ryanair’s first bid in 2006) stated its opposition to selling to Ryanair, it is far from certain that the deal will ever close.

Seven out of Aer Lingus’ top 10 routes and four out if its top 10 bases involve airports not served by Ryanair. This gives some credibility to Ryanair’s claim that it would be able to use Aer Lingus to access airports that it would not serve in its own right. Nevertheless, competition concerns have scuppered the deal in the past, due to the strong combined position that the two would command at Dublin and from Ireland more broadly.

Aer Lingus is the leading carrier at Dublin airport, with almost 46% of seat capacity, ahead of Ryanair with 37%, giving the two airlines 82% between them. 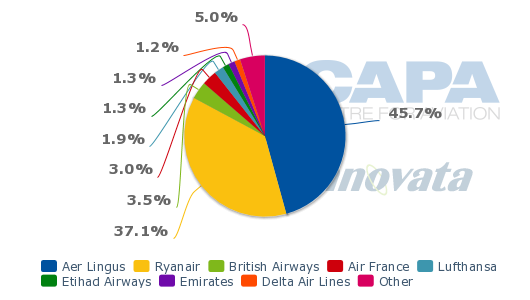 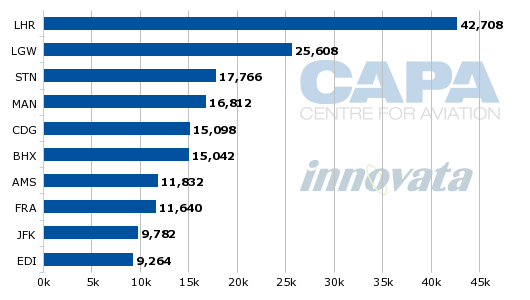 Aer Lingus did not provide any guidance in terms of profit guidance for 2013, but Mr Mueller outlined areas of focus. A key priority for management remains the resolution of what it calls “the complex pension legacy”, a reference to significant deficits on two pension schemes of which Aer Lingus employees are members. While Aer Lingus has no legal obligation to increase its contributions to these schemes, management appears keen to find a way to improve pension benefits for affected members, subject to shareholder approval, since it views this is an important industrial relations issue.

Turning to operational matters, transatlantic capacity will grow 15% in 2013, building on Dublin and Shannon’s advantages in offering US customs pre-clearance, with at least two daily flights to all main gateways. Aer Lingus remains committed to its neutrality with respect to the major global alliances, preferring to open additional routes selectively in all important regions, using bilateral partnerships where necessary. It will continue to develop its regional business through a franchise agreement with Aer Arann, using the latter’s ATR fleet to serve lower capacity routes and to add feed to the transatlantic network. Its recent agreement to operate short-haul services on behalf of Virgin Atlantic may lead to similar commercial agreements with other customer airlines.

Aer Lingus is solidly positioned between the LCCs and the full service carriers, with a relatively low-cost profile. A pure LCC model was never going to be sustainable since Aer Lingus cannot access deeply discount-priced aircraft and must carry the burden of legacy costs stemming from its seniority list and pensions. At the same time, its geographic positioning, relatively small domestic market (in particular the business market) and the presence of ultra low fare competition from Ryanair make a full service model uncompetitive.

On short-haul, it offers fares that are generally competitive compared with the major full service carriers, but which are more expensive than true LCCs. Its short-haul average fare per passenger of EUR94 compares with Ryanair at EUR47 in calendar 2012. On long-haul, it offers a network of US gateway cities and access beyond these gateways through codeshare partners, but, while its fares are competitive and US customs pre-clearance is an advantage, it is a niche player with a limited network and a sub-critical mass frequent flyer programme.

Unit revenue recovery has been the key to profit recovery

Management has very effectively focused on costs since the global financial crisis, but the recovery in operating profits is really due to the recovery in unit revenues. The chart below shows that unit costs (operating cost per ASK) have risen since 2009, but unit revenues have risen faster. The fall in labour costs (down EUR45 million since 2009) has been offset by increases in airport and en route charges (up EUR46 million since 2009) and fuel costs have risen EUR27 million over the same period.

In spite of management’s cost initiatives, Aer Lingus’ profitability remains vulnerable to any slump in yields. Its strong cash position, however, should help to cushion the impact of any fall in profits, at least in the near to medium term. 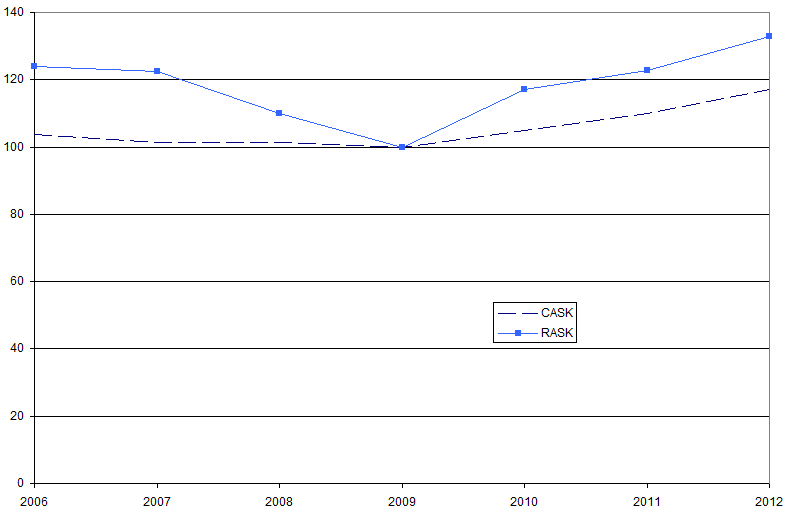