In a quiet overall market, most airline stocks traded in subdued fashion on Tuesday. Only Aer Lingus (-4.2%), under a cloud and under attack from Ryanair (-2.2%), and SkyEurope (-6.7%), negotiating its way through its financial issues, stood out as losers on the day. 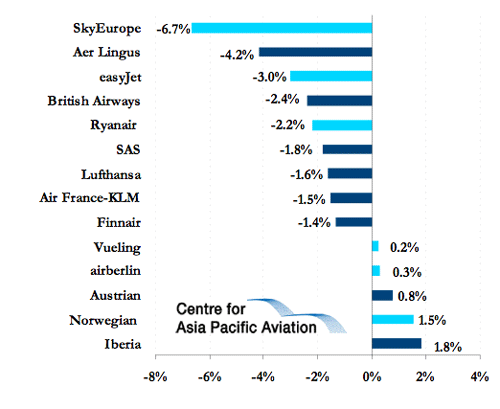 On Sunday 15-Mar-09, SkyEurope posted a statement setting out its latest financial developments: " (Creditor) York Global Finance II S.a.r.l. has extended the deadline for the repayment of its EUR 15 million loan granted in December 2007 and its EUR 10 million loan granted in September 2008 to SkyEurope Airlines a.s. to 15 April 2009. Both loans were due for repayment on 15 March 2009 in accordance with the loan agreements as amended.