Aer Lingus’ shares gained 1.9% yesterday upon the release of the carrier’s solid traffic performance in Aug-2009, which instilled some investor confidence.

Shares in British Airways gained 1.8% yesterday. The carrier’s Chairman, Martin Broughton, reportedly stated BA held talks with Lufthansa regarding a possible bid for bmi. At least 12 carriers are reported to have expressed interest in bmi and approached Lufthansa for information regarding the carrier. Lufthansa stated it has not completed its own assessment of the possibilities for bmi. The German carrier’s shares rose 2.5% yesterday.

Elsewhere, Finnair’s shares were steady, as the carrier announced plans to reduce costs in the current weak demand environment. The carrier added that it is considering purchasing three new A330 aircraft rather than leasing them, due to a 20% increase in leasing prices, according to the carrier. 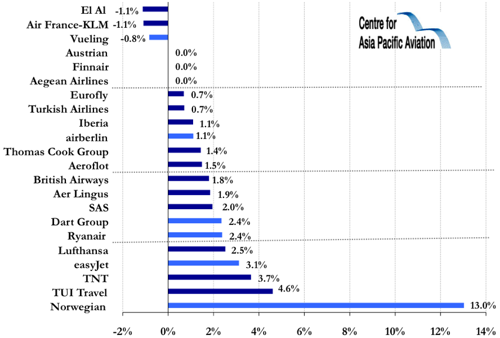