Aer Lingus saw operating profit growth in 3Q2013, after a fall in the 1H result. Nevertheless, ongoing yield weakness on short-haul led it to reiterate guidance for lower profits in FY2013 versus FY2012.

The airline's rapid Atlantic capacity expansion has met with some success, but has also provoked a dispute with cabin crew union IMPACT. Assuming this can be resolved and that wet-lease partner ASL proves to be a successful operator, its long-haul niche looks like being a source of growth.

The bigger challenge is on short-haul, where ultra-LCC rival Ryanair is pushing out lower fares in large quantities. It seems that the battle between the two is intensifying just as Ryanair is being directed to sell its 30% stake in Aer Lingus.

The company reiterated FY2013 guidance for operating profit of around EUR60 million (guidance that the result would be in line with last year’s EUR69 million was lowered on 13-Sep-2013).

Aer Lingus’ balance sheet continues to look healthy, with a net cash position (i.e. cash minus debt) of EUR441 million at 30-Sep-2013, the same as 12 months earlier. Its gross cash position of EUR933 million is equivalent to eight months of revenues, giving it a significant cushion against unexpected events. 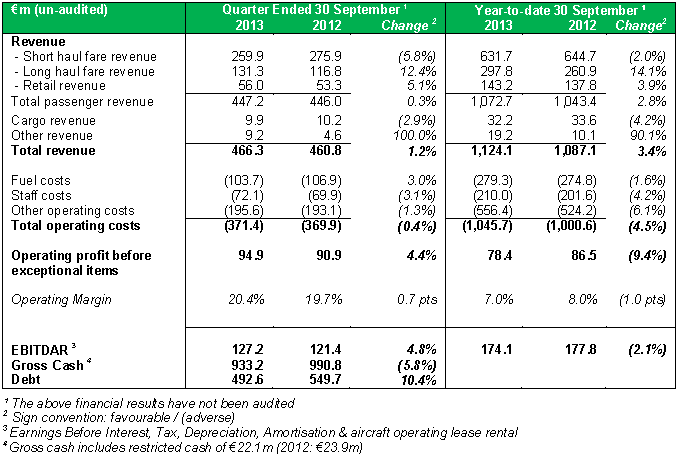 Long-haul growth reflects the re-deployment to the mainline Aer Lingus fleet of an A330 aircraft that had previously been utilised on the Washington Dulles to Madrid service in partnership with United Airlines in 2012. Growth on the North Atlantic is an important element of Aer Lingus’ strategic development and includes attracting transfer traffic from the UK regions away from London Heathrow to connect via Dublin. Routes under the Aer Lingus Regional brand are operated by Aer Arann. 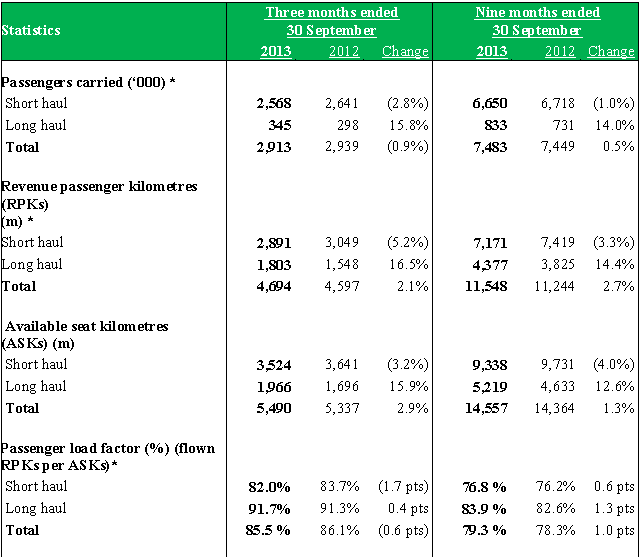 Aer Lingus CFO Andrew Macfarlane told an analyst conference call that currency movements had a net positive impact on the bottom line of around EUR1 million in 3Q2013.

Average fares down in short-haul and long-haul

Short-haul yields were adversely affected by price discounting across Europe, a phenomenon also reported by competitor Ryanair recently. Aer Lingus sees Ryanair’s aggressive pricing and capacity increases in some markets as being agents of this yield weakness.

Retail revenue per passenger has risen

Retail revenues per passenger performed more strongly, increasing by 6.2% to EUR19 in 3Q2013. This reflects growth in Aer Lingus’ ‘fare family’ pricing product, online booking fees, seat selection and baggage fees. Nevertheless, this revenue stream represents only 13% of passenger revenues, compared with more than 20% for airlines such as Ryanair and easyJet.

Aer Lingus acknowledges that there is scope for further improvement here and is developing initiatives aimed at driving greater discretionary spend. From this negative should spring opportunity.

Operating costs grew by just 0.4% in 3Q2013, less than the growth in ASKs and revenues. This performance was helped by a 3.0% decline in fuel costs, which accounted for 28% of costs in the quarter. USD fuel prices were unchanged, but the strengthening of EUR versus USD more than offset the increased volume of fuel consumed.

Labour costs, which accounted for 19% of the total, increased by 3.1% in the quarter. This mainly reflected higher headcount to support the contract flying business for Virgin Atlantic and the extra long-haul aircraft in the Aer Lingus mainline fleet.

The company announced a voluntary redundancy scheme in Apr-2013, with a target of lowering headcount by 100 in 2013. Aer Lingus initially received interest in the scheme from more than 100 people, but many subsequently chose not to commit to it as a result of ongoing delays in the resolution of the situation regarding pension-related uncertainties.

At 30-Sep-2013, 48 staff had left under the voluntary redundancy scheme and a further 53 have now committed to leave by the end of the year and four in 2014.

Since the departures will have occurred later than originally anticipated, Aer Lingus will not achieve the savings targeted in 2013, but should see full year savings in 2014 from the programme.

IMPACT/Cabin crew dispute over the Shannon base closure

As a result of this opposition, the carrier proposed to close the cabin crew base at the airport from Mar-2014. Cabin crew represented by IMPACT voted in favour of industrial action on 04-Nov-2013, with 91% in favour.

According to the union: “Cabin crew on all Aer Lingus bases are resolved to fight the closure and protect the 87 jobs at Shannon. Management... has written to the union in recent days issuing notice of collective voluntary redundancies... This is the latest in a succession of ultimatums and unnecessary coercive actions by Aer Lingus management which are designed to bully its staff into submission”.

The union also referred to “management’s coercive tactics” and the “fight to restore an acceptable approach to industrial relations”. While such language is not uncommon in labour relations disputes, this stance by the union suggests that some sections of its workforce are not happy with Aer Lingus’ voluntary redundancy scheme. The two sides are expected to meet Ireland’s Labour Relations Commission on 8-Nov-2013 in an attempt to resolve their differences.

Aer Lingus CEO Christoph Mueller told analysts on a conference call to discuss the 3Q results that he was “optimistic this issue can be resolved without any interruption” to Aer Lingus’ operations. He added that there had been eight ballots in favour of industrial action over the past two years, but that not a single day had been lost to strikes.

Are there changes to come in Aer Lingus' ownership if Ryanair exits?

In Aug-2013, the UK’s Competition Commission (CC) ruled that Ryanair must sell its almost 30% stake in Aer Lingus, since the CC concluded that the holding was anti-competitive. Ryanair, who would be permitted to retain a 5% stake in Aer Lingus, is appealing this decision in a hearing scheduled for Feb-2014. Aer Lingus has often said that it does not wish to see Ryanair continue as a shareholder.

If Ryanair’s appeal is not successful, the enforced sale of its holding would raise the possibility of a change in ownership of Aer Lingus for the first time in a number of years. The Irish Government has indicated in the past that it might consider selling its 25% stake in Aer Lingus, but it has always been clear that it would not sell to Ryanair.

See related report: Ryanair and Aer Lingus: will the UK CC’s order bring down the curtain on this Irish farce?

Etihad Airways already has a 3% stake in Aer Lingus and the two carriers cooperate in a number of areas. Their codeshare is seeing bookings ahead of expectations for both carriers, according to Mr Mueller, and they are looking at ways to take advantage of their joint purchasing power.

Mr Mueller recently told the Irish Independent (31-Oct-2013): “We have a variety of issues where we cooperate, not only the flying bit, which has performed better than we expected. We have a couple of joint purchasing initiatives on things like IT systems; we talk aircraft, we talk engines. There’s a list of 17 points we are currently looking at.”

Etihad reportedly turned down the opportunity to buy Ryanair’s stake ahead of the CC ruling. This may indicate a lack of interest in building its stake from the existing 3%, or it may be a negotiating tactic since a forced sale by Ryanair may lead to a lower price. Either way, the Irish Government’s ongoing 25% holding and the EU’s 49% limit on non-EU ownership mean that full control of Aer Lingus is unlikely to pass to any single entity.

Aer Lingus has a North Atlantic niche, but the most aggressive of short-haul competitors

Aer Lingus’ plans to develop its North Atlantic business, while not without operational risk, should provide growth opportunities given the geographic positioning of its Dublin hub, the ability for passengers to clear US immigration in Dublin and the Irish carrier’s cost advantage.

These attributes should allow Aer Lingus to grow its long-haul network while remaining outside the dominant North Atlantic JVs.

However, Aer Lingus faces a significant challenge on short-haul, where its major rival Ryanair is aggressively pursuing a strategy of price leadership and selective capacity expansion.

If Ryanair is finally to be thwarted in its seven year-long attempt to acquire Aer Lingus, you can bet that it will re-double its efforts to compete its smaller rival out of existence.

Aer Lingus will be thankful that its balance sheet strength should buy it plenty of time to withstand this onslaught.