Following dramatic declines in airport passenger numbers in 2012 and 2013, Spanish airports operator AENA has decided to introduce an airport charge discounting scheme to offer incentives to airlines to grow their traffic in Spain once more. With plans being formulated to privatise Spanish airports, the success of this initiative will be closely watched by both industry participants and potential investors.

In this report, we examine traffic trends at AENA and consider whether they have been affected by higher airport charges. Our analysis suggests that there is a clear link and so action to reverse falling traffic numbers through lower charges seems a logical step.

The questions then are whether the discounts offered will have the desired effect and how sustainable will be any resultant growth in passenger numbers.

Ryanair is the biggest carrier in Spain by passenger numbers and its CEO Michael O’Leary has called AENA’s discount scheme “almost unachievable”.

Annual passenger growth at AENA’s airports has been negative in three out of the past five years. In 2012, passenger numbers fell by 5.0%. While Spain’s economy has been struggling to find any growth for a number of years, the fall in passenger numbers in 2012 was more dramatic than might be expected purely from the 1.4% contraction in GDP.

Data from CAPA’s Airport Charges Database (supplied by Air Transport Research Society) show that combined landing and terminal charges across a range of aircraft types at Spain’s largest airport increased by around 60% or more in 2013 versus 2012.

Airlines at Barcelona, Spain’s number two airport, have seen increases of 50% or more in these charges in 2013. 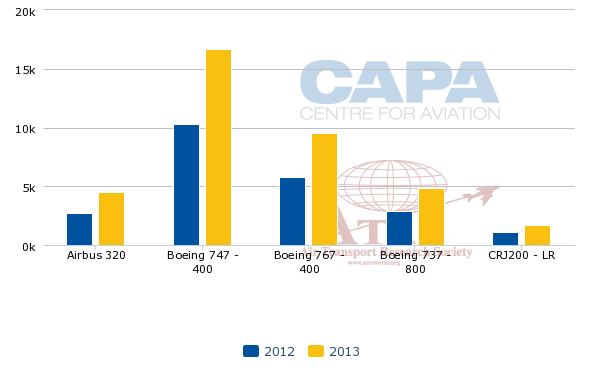 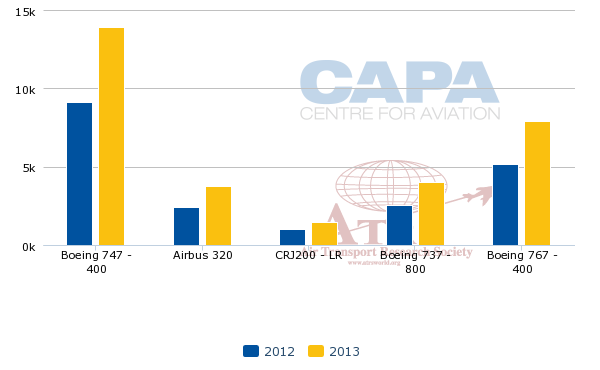 Falling passenger numbers not only due to GDP weakness

The 5.0% drop in passenger numbers at AENA airports in 2012 compares with an increase of 4.4% at the world’s airports (source: Airports Council International). Although Europe’s growth was slower than the global average, reflecting the EU’s economic weakness, Europe’s airports still handled 1.8% more passengers in 2012 than in 2011.

Spain’s airport passenger decline made it by far the worst performer among Western Europe’s five biggest countries. The 5.0% drop in Spanish airports compares with a 1.2% fall in Italy and positive growth in the UK, Germany and France (see chart below). While Spain experienced a fall in GDP in 2012, its economic contraction was less than that of Italy. GDP growth is an important driver of air traffic growth, but Spain’s 2012 tumbling passenger numbers were not solely due to its shrinking economy.

Growth in GDP and passenger numbers at airports in major Western European countries (%): 2012 vs 2011

AENA’s annual accounts show that its average air traffic revenue per passenger increased by 23% in 2012 to reach EUR9.03. This followed a 22% increase in 2011, whereas average annual increases had been around 3% in the period 2001 to 2010. The increased charges at Madrid and Barcelona, illustrated above, suggest that air traffic revenue per passenger will jump significantly again in 2013.

In this context, it becomes apparent that AENA’s airport charge increases have hit passenger numbers hard.

Majority of AENA airports in decline 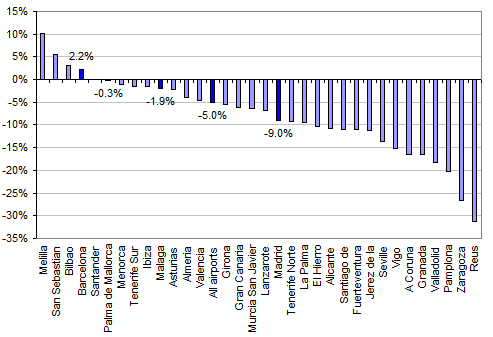 The passenger decline has continued into 2013, with Spain’s airports suffering a 4.9% decline in traffic in the first nine months of the year. Madrid’s decline has accelerated to almost 14% in 2013 so far and Barcelona’s growth has also turned negative. Madrid Barajas is now operating at only around 60% of its capacity. The first nine months of 2013 saw seven AENA airports achieving positive growth and 27 seeing a drop in numbers. 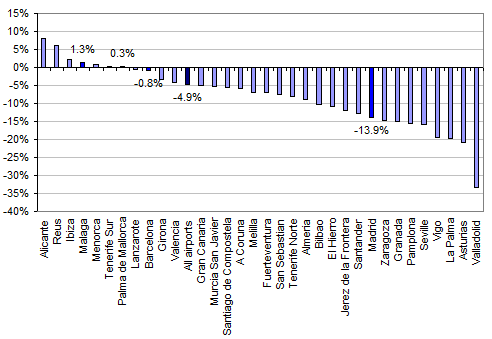 Again the 2013 year-to-date performance of Spain’s airports has underperformed the other major Western European countries. Italy’s airports have also seen negative growth in passenger numbers (-2.5% Jan-Sep), but the UK, France and Germany have seen gains once more. 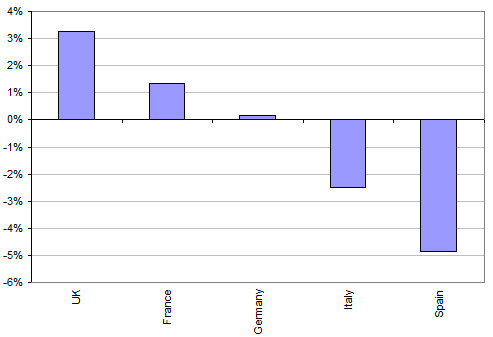 Airport charge increases at Madrid Barajas now place the airport among the most expensive in Europe. A comparison of its charges for a range of aircraft types with those levied by Europe’s top four hubs – London Heathrow, Frankfurt, Paris CDG and Amsterdam Schiphol – shows that Madrid’s fees are similar to those of Paris CDG and more expensive than those of Frankfurt and Amsterdam. Among this group of airports, only London Heathrow is significantly more expensive, according to data from Transport Research Society. 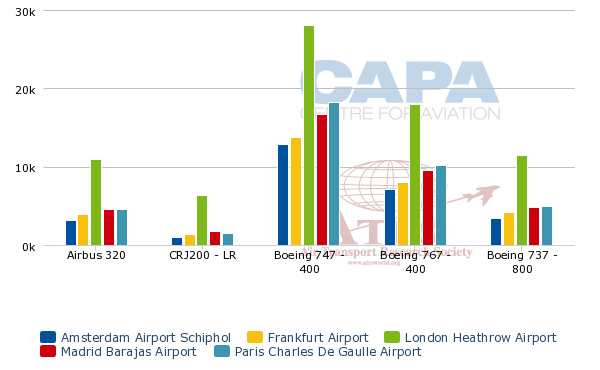 Barcelona is expensive for widebodies

Similarly, we can compare charges at Barcelona El Prat with a selection of similarly-sized airports in other Western European nations: Munich, Rome Fiumicino, Paris Orly and London Gatwick.

While Barcelona is the second least expensive of this group for narrowbody aircraft, the difference is not substantial. Moreover, it is the second most expensive for widebody aircraft (at least for Boeing 747-400 and 767-400 aircraft), according to data from CAPA’s Airport Charges Database (supplied by Air Transport Research Society). 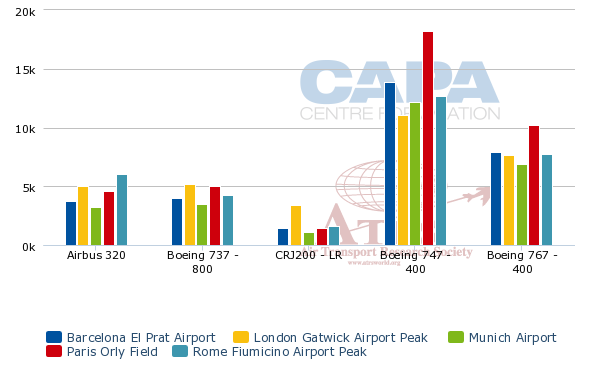 The rate of decline in passenger numbers at AENA airports has relented a little through the course of 2013. Falls of 9%-10% in Jan-Feb have become falls of less than 3% in Aug-Sep. This reflects the Spanish economy’s return to growth in 3Q2013 for the first time in nine quarters, as GDP increased by 0.1% in the Jul-Sep quarter.

However, the continued negative growth in passenger numbers suggests that the high airport charges levied by AENA are still having an impact. 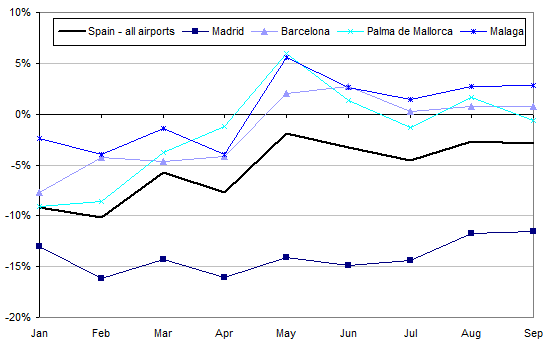 All but two major airlines are cutting capacity in Spain

Among the largest airlines in Spain, only two – Vueling and Air Europa – have seen growth in passenger numbers at AENA airports in the first nine months of 2013, according to data from AENA.

The leading airline Ryanair has seen a drop of 9%, after it decided to reduce capacity to Spain as a reaction to higher charges. Ryanair has a track record of cutting capacity where it does not like the cost base and of returning to growth if suitable incentives are offered.

Growth in airport passenger numbers of major airlines in Spain (%): 2013 vs 2012 (Jan-Sep cumulative) 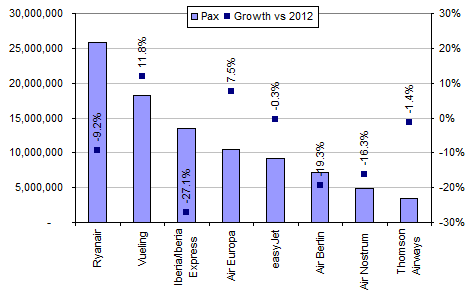 Iberia’s fall in traffic is less driven by its reaction to increased airport charges than by its own restructuring and the concurrent growth of Iberia Express and Vueling, both part of parent group IAG (although the combination of the three has still seen a drop in AENA airport passenger numbers of more than 8% in the first nine months of 2013).

Air Europa is taking advantage of Iberia’s cuts to grow its network, in spite of the higher charges. Capacity cuts by other leading carriers in Spain seem more closely motivated by increased airport charges. Even if Iberia returned to growth, AENA would still suffer declining traffic if the likes of Ryanair, easyJet and airberlin continued to reduce their capacity in Spain.

As Spain’s economy shows some signs of tentative recovery, previously shelved plans to privatise AENA’s airport operations (but not its air navigation services) are being dusted off and re-worked as the government seeks to lower its debt through asset sales. However, falling passenger numbers, particularly at Madrid, are a potential turn-off to outside investors, who could be offered at least 49% of the group and possibly as much as 60%. It seems crucial for AENA to boost traffic and lower airport charges which could provide the necessary stimulus.

According to El Pais (14-Oct-2013), Spain’s Public Works Minister Ana Pastor has targeted an increase in passenger numbers of two million, or 2%, from the scheme to discount airport charges to airlines in exchange for volume growth. The programme will come into effect at the start of 2014.

On a recent conference call with analysts, Ryanair’s Michael O’Leary dismissed AENA’s discount scheme as “a PR stunt”. He argued that, under the scheme, not only must an individual airline deliver growth, but it must also make up for declines in other airlines: “I don’t think it will result in a significant lowering of airport costs and I don’t think it will be successful”.

It is not unusual to hear Mr O’Leary talking tough about airport charges in a bid to improve the terms on offer. Nevertheless, AENA must find a way to tempt the likes of Ryanair to return to growth in Spain if it is to find the external investors that the government needs.