Reporting a strong increase in its 2014 profits, the Aegean Airlines Group has confirmed its position as Europe's most profitable legacy airline (by operating margin). Double digit capacity growth, increasing competition from LCCs (Ryanair in particular) and the fragile Greek economic backdrop led to a reversal of the unit revenue increase that Aegean enjoyed in 2013. However, it managed to offset lower RASK with even lower CASK.

In 2014, Aegean completed its first full year following the acquisition of Olympic Air. The Olympic acquisition brought Aegean a domestic PSO network, the flexibility to deploy turboprops on thinner domestic routes and more options in adapting capacity and frequency to optimise connectivity between domestic and international routes.

With Olympic's 2013 revenue around one quarter that of its parent in 2013, this was a significant acquisition for Aegean. It seems to have absorbed it without breaking its stride.

The consolidated net result of the Aegean Airlines Group increased to EUR80 million in 2014, 28% higher than the proforma result of EUR53 million in 2013 (which treats the acquisition of Olympic Air as if it had been consolidated for all of 2013, rather than only for the last two months). On the same basis, the consolidated operating result, or EBIT, was up by 38%.

The full-year results for 2014 suggest that Aegean's integration of Olympic Air, which was loss-making at the time of its acquisition at the end of Oct-2013, has been very successful. Although Olympic is a small airline, its impact on the Group can be seen in the 30% growth in revenues reported in the statutory consolidated accounts (which only include Olympic in the 2013 figures for the final two months).

The consolidated Group operating margin of 11.6% in 2014 was 2.6ppts higher than the proforma consolidated margin in 2013. Moreover, this margin was very close to the parent Aegean Airlines' stand-alone margin of 12.1%.

Operating margins for listed European airline companies (% of revenue): 2013 vs 2014 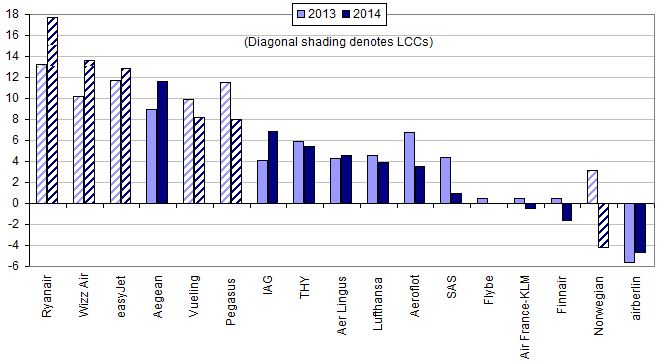 Notes: calendar years except Wizz Air (2013 is year to Mar-14, 2014 is 12M to Sep-14); easyJet (years to Sep-13 and Sep-14); SAS (years to Oct-13 and Oct-14); Flybe (2013 is year to Mar-2014)
Lufthansa 2013 adjusted as if change in depreciation already implemented
Aegean 2013 based on proforma result including Olympic Air consolidation for full year
airberlin 2014 based on preliminary adjusted EBIT
Source: CAPA - Centre for Aviation and airline company reports

Aegean's healthy 2014 results, generating another year of record profit, consolidate its recovery from the loss-making years of 2010 to 2012. Although operating cash flow improved also, modestly higher investment and pre-delivery payments for Airbus aircraft led to a slight fall in the Group's cash balance.

Net cash (the surplus of cash over debt) decreased from EUR168 million to EUR149 million and adjusted net debt (adding operating leases capitalised at eight times annual rental payments to debt) increased from EUR559 million to EUR577 million. Aegean’s 2014 year end cash balance of EUR208 million was down by EUR19 million over the 12M, but still equivalent to a fairly healthy 83 days of revenue. Its net cash position gives it plenty of flexibility when it comes to options for aircraft financing, a useful asset given the uncertainty of the Greek economy.

On a proforma basis, the combined passenger numbers of the Group increased by 14% to 10.1 million, driven by recovering demand for tourism and Aegean's network growth. Domestic passenger numbers grew slightly faster, by 15%, and represented just over half (52%) of the total.

The domestic growth was stimulated by lower fares, in part reflecting growing competition from Ryanair. International traffic growth of 13% was broadly in line with the market, but was boosted for Aegean by its performance in Athens, where passenger numbers were up 20%, and lower in other regions of Greece. In 2015, Aegean expects domestic traffic to be flat, with growth coming from its international network. 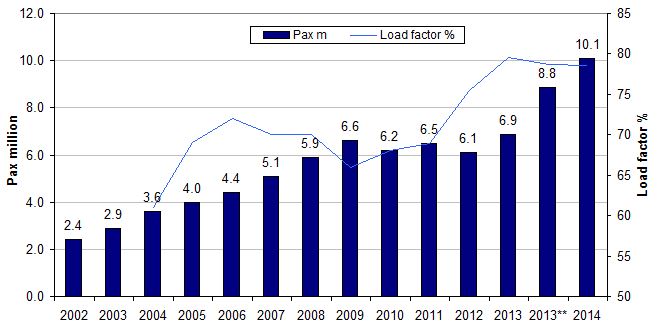 Group capacity, measured in ASKs, increased by 13.6% on a proforma basis, with seat numbers up 10% and average sector length up 5%. Overall passenger load factor (total RPK divided by total ASK) was flat at 78.6% and scheduled load factor was stable at 78.3%.

Aegean made strong load factor gains from 2009 to 2013, but seems to have reached a plateau at a level just below the AEA average of 80.6%. Moreover, LCC rival Ryanair increased its load factor by 3ppts to 86% in calendar 2014. Aegean will need to focus on load factors as an area for improvement in 2015. 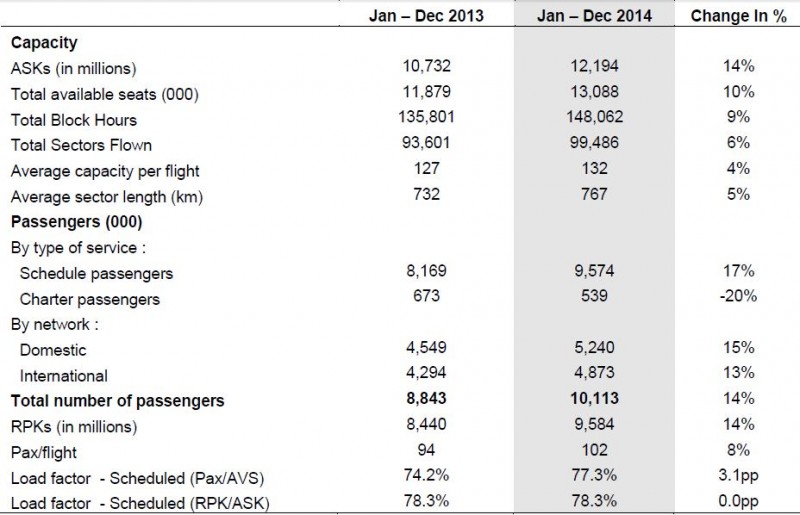 Group revenues increased by 7.3% in 2014 from the proforma combined 2013 figure for Aegean and Olympic. This was less than the growth in ASKs, highlighting a 5.6% drop in unit revenue (revenue per ASK, or RASK), driven by a similar fall in yield.

Scheduled revenues grew by 3.9%, less than the growth in total revenue, implying a heavier drop in scheduled RASK. To some extent, a fall in RASK is to be expected given the increase in average sector length, but the extent of the decline highlights price pressure. Indeed, revenue per passenger, which might be expected to increase with sector length, fell by 6.2% to EUR90.2 (according to our calculation).

This price pressure reflects growing LCC competition in Greece, only partly offset by the consolidation of Aegean and Olympic into one group. According to data from OAG, the LCC share of international seats to/from Greece was 40% in 2014, up from 37% in 2013. The LCC share of domestic seats was 13%, up from less than 3%.

Ryanair now has about a 16% share of domestic seats in Greece (based on the week commencing 30-Mar-2015), compared with zero two years ago. The combination of Aegean/Olympic is still the clear domestic leader, with 80% of seats, but this compares with 83% two years ago.

At Athens, Aegean's biggest base, the Group's seat share is now about 53% while Ryanair has about 12%. Two years ago, Aegean/Olympic had a combined 59% and Ryanair was not present in Athens.

Others have lost out in the Greek market more than the Aegean Group over the past two years, notably the recently bankrupt Cyprus Airways. But prices are likely to remain under pressure from Ryanair.

Group operating costs increased by 4.2% on a proforma basis, less than the increase in ASKs and revenue. Fuel costs, which accounted for 29% of the total, and non-fuel costs both increased at a similar rate.

Labour costs fell by 2.1% proforma. Although the group has not reported average headcount data on a proforma consolidated basis for 2013, the group's year end number of employees increased by 4.1% and so the fall in costs suggests improved labour productivity.

Unit costs (cost per ASK, CASK) fell by 8.3% proforma, more than the drop in unit revenue.

In 2015, Aegean plans to add a further two million seats, representing growth of 15% on top of 2014's 10% seat growth. Growth will focus on international routes from Athens and this will increase the degree of seasonality in the schedule, putting more emphasis on summer leisure demand.

Nevertheless, Aegean also plans to increase the number of destinations from 120 in 2014 to 134 in 2015, focusing on developing its network from Athens. New destinations planned for 2015 are Helsinki, Toulouse, Deauville, Metz, Pisa, Malta, Amsterdam, Alexandria, Sharm-el-Sheikh, Paphos, Riyadh, Tallinn, Oslo, Tehran, Yerevan and Dubrovnik.

In addition to the development of its Athens base, a second strategic priority for Aegean in 2015 is the expansion of its presence in Cyprus, following the recent demise of Cyprus Airways. Aegean has operated in Cyprus for 10 years and, effective from the start of the summer 2015 season, will base four A320 aircraft in Larnaca. In the peak summer months, it will offer 14 destinations from Larnaca to Greece and seven other countries. Its non-Greek Cyprus connections are London Heathrow, Paris CDG, Munich, Milan Malpensa and Zurich to the west and Tel Aviv, Kiev and Beirut to the east.

The Larnaca base will provide additional connectivity with the rest of Aegean's European network. Ryanair, which currently has its Cyprus base at Paphos, also has ambitions to expand its network from the island. However, it seems unlikely that it will target the airport destinations that Aegean serves from Larnaca.

In a Dec-2014 presentation, Aegean indicated that the Group expects to grow its fleet from 50 aircraft in 2014 (36 Airbus A320 family and 14 Bombardier regional aircraft operated by Olympic Air in the domestic market) to 56 in summer 2015. Aegean has since revised this by one aircraft and now plans to have a fleet of 57 aircraft by summer 2015.

Aegean currently has seven outstanding orders direct with Airbus for A320s, comprising five that were deferred during the financial crisis and a further two orders placed in late 2014. Four of these are due for delivery in 2015, including three in Jun-2015 and one in Nov-2015. In addition to these direct orders, Aegean will take a further three aircraft from lessors in summer 2015, bringing the fleet total to 57 this summer. The remaining three direct Airbus orders will be delivered by Mar-2016. 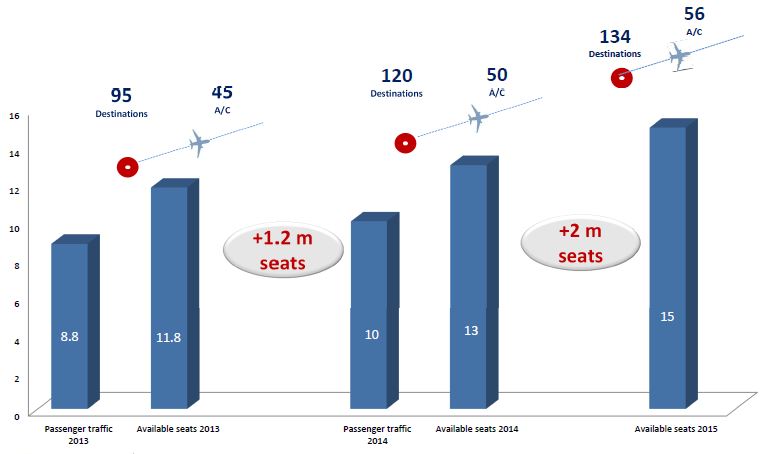 Downward pressure on unit revenue is here to stay

Analysing Aegean's 2013 results in Mar-2014, CAPA noted that the key to its jump in profitability in 2013 was a strong increase in RASK. However, we suggested that it was unlikely that this would be repeated in 2014: "As competitor capacity grows, for example from LCCs such as Ryanair (both on international and domestic markets), it may be difficult to repeat this RASK performance in 2014."

After such a strong profit margin in 2013, we pointed out the most likely path to matching this in 2014, saying that "the key will be to ensure that any RASK weakening is offset by CASK reduction, while managing the integration of Olympic in to the Group."

Aegean managed very successfully to achieve the necessary unit cost reduction, not least by improving labour productivity. However, as noted above, further downward pressure on unit revenues is likely in 2015, given LCC competition and what Aegean calls "the challenges in the economic environment". It is seeking to mitigate this downward price pressure through network improvements, driving ancillary revenues, flight productivity improvements and load factor gains and further network synergies with Olympic.

Nevertheless, Aegean is right also to be seeking further unit cost reduction. It targets distribution costs, ground handling and maintenance. It should also benefit from lower fuel prices (although their impact is diluted by hedging and the weaker EUR versus USD).

Aegean has been Europe's most profitable full service carrier for the past two years (based on operating margin). It will want to demonstrate that it can sustain this level of profitability.