Aegean Airlines returns to profit in 9M2013. Olympic cost synergies will be key to next step up

The year 2013 will go down in Aegean’s history as a year to remember. The Athens-based carrier has already packed a lot into its short life since it commenced operating scheduled passenger services in 1999. In that time, it has transformed its fleet; moved its head office; experienced growth, decline and a return to growth; seen a significant increase in LCC competition; become a regional partner to Lufthansa; joined the Star alliance; listed its shares on the Athens Stock Exchange; and undergone more than one merger.

2013 will go down as the year in which it acquired Greece’s former national flag carrier, Olympic Air, and in which it reversed a three year period of losses to record an annual profit once more. In the first nine months of 2013, it was back in the black, turning a EUR9 million loss into a EUR59 million profit. Although revenue per passenger growth slowed in 3Q, it stayed ahead of growth in cost per passenger. Nevertheless, with unit costs (CASK) higher than those of LCC competitors, it must now use the Olympic acquisition to drive cost synergies as far as possible.

Aegean reported a strong turnaround in its earnings for the first nine months of 2013, with a net profit of EUR59 million reversing a loss of EUR9 million in the same period last year and continuing the progress made in 1H2013. Nine month revenues grew by 21% to EUR532 million. For 3Q2013, net profit grew 43% year-on-year to reach EUR43 million, with revenues up by 20% to EUR254 million.

The nine month EBIT margin was 13.8%, an improvement of 16.1 ppts, while the margin in the third quarter was 22.4%, a 5.8 ppt improvement, reflecting the seasonal importance of this quarter.

Aegean reported annual losses for each of 2010, 2011 and 2012. With a EUR59 million profit secured for the first nine months and 4Q unlikely to spoil things (it made a small loss of EUR2 million in 4Q2012), its return to an annual profit looks assured (barring any unforeseen accounting issues).

At the reporting date, Aegean owed EUR52 million as the balance of the consideration due to Marfin Investment Group for the acquisition of Olympic, a sum that now looks comfortably payable without the need for external financing. Given that Aegean favours operating leases for the financing of aircraft, it should also cope well with the expected delivery of five Airbus A320 aircraft in 2014 and 2015.

Passenger growth accelerates to 16% in 3Q, driven by international markets

The strength of Aegean’s international traffic reflected favourable demand conditions for incoming summer leisure traffic and the maturing of routes started in previous years. In the nine month period, international passenger numbers to/from Athens were up 9%, while they grew by 22% in Aegean’s six regional Greek bases. Load factor on international flights increased by 6 ppts to 80%, but Aegean has not published overall load factor figures.

In spite of the acceleration of growth in passenger numbers through the year, Aegean’s revenue growth has remained at a broadly similar rate. Nine month revenue growth of 21%, driven mainly by the growth in scheduled flights, was close to the 22% growth rate seen in 1H2013.

Nine month cost growth was 2%, much slower than traffic and revenue growth. However, the third quarter saw a considerably different level of cost development than the first half. Costs grew by 12% in 3Q2013, after a fall of 4% in 1H2013. Aegean did not give a detailed cost breakdown for 3Q, but labour costs grew by 12% after falling by 5% in 1H and all other costs (ex depreciation) grew by 12% after growing by only 3% in 1H.

It is not always useful to read too much into cost performance for one quarter, as timing differences (for example between staff recruitment/training and new capacity) and other factors, including pension costs and accounting changes can distort the pattern. Nevertheless, Aegean’s management will no doubt seek to demonstrate that the sharp increase in cost development in 3Q2013 is not the start of a new trend.

Cost per passenger growth has also varied through the year. For the nine month period, it fell by 6%, but it was down by 8% in 1H and by 3% in 3Q. This probably reflects a more challenging year-over-year base level of cost as Aegean’s cost initiatives, such as last year’s outsourcing of ground handling, show their effect.

Importantly, the year-on-year change in revenue per passenger continues to outpace the change in cost per passenger, and this is driving improved margins, albeit at a lesser pace than in 1H2013.

Since the end of 3Q2013, Aegean concluded the acquisition of Olympic Air from Marfin Investment Group (MIG) on 23-Oct-2013 and so Olympic’s losses are not included in Aegean’s nine month results. For FY2013, Olympic Air results will be included and “will burden full year results”, according to Aegean. In an acquisition prospectus published in Nov-2013, however, Aegean said that the consolidation of the results of Olympic for the period 23-Oct-2013 to 31-Dec-2013 will have “no material impact at a consolidated level”.

It also expects that operating cash flows will cover the financing needs for the acquisition. On a full year basis, Aegean expects a contribution to revenues of 10% to 15%, but only 3% for FY2013 (with just over two months of consolidation). The impact on Aegean’s equity will depend on the goodwill valuation (resulting from the acquisition price exceeding the net book value of the acquired assets).

Acquisition prospectus gives the rationale for the Olympic acquisition

The Olympic deal was completed after the European Commission gave its approval after an investigation. CAPA analysed the EC’s decision and considered the implications for Aegean in a report on 17-Oct-2013.

In the acquisition prospectus published in Nov-2013, Aegean further explained its rationale for the deal as follows:

Synergies are not yet quantified

Of course, it is very early days and Aegean has not quantified the value of the synergies that it expects, but says that it anticipates synergies at an administrative, commercial and technical level. It also hopes that increased buying power and the elimination of duplicated systems to lead to cost savings. Central functions will be merged, but the two companies will operate separate fleets and preserve the two different brands.

It expects network synergies from increased connectivity between domestic and international routes, leading to better load factors, and from the complementary nature of the two fleets. Aegean operates Airbus A320 family jets and Olympic operates Bombardier turboprops. Aegean expects to match aircraft type to demand by route and season.

Some of the early post-acquisition signs give cause for optimism, according to Aegean Managing Director Dimitris Gerogiannis, who said on 29-Nov-2013: “It is encouraging that our early post acquisition network initiatives supported with attractive promotional fares have resulted to a marginal but positive increase of traffic in several domestic destinations already in November 2013 following four consecutive years of traffic decline.”

This does not sound so much like network synergies as good old-fashioned price discounting.

Presumably, however, one of the eventual benefits of the acquisition must be that it could improve the group’s pricing power and that it can reverse the declining RASK trend that Aegean has suffered in recent years.

Cost synergies will be vital

Regardless of the possible RASK impact, cost synergies will need to be significant if Aegean is to make a good return on its investment in the Olympic acquisition. Certainly, it will likely need more than just increased market share to justify paying EUR72 million for an airline that lost almost EUR130 million in the three full years it spent under MIG’s ownership.

The acquisition prospectus rightly acknowledges the need and opportunity to reduce unit costs.

Given Aegean’s current CASK positioning relative to other European competitors (lower CASK than most legacy carriers, but higher CASK than the LCCs), it will be vital not to lose sight of this. 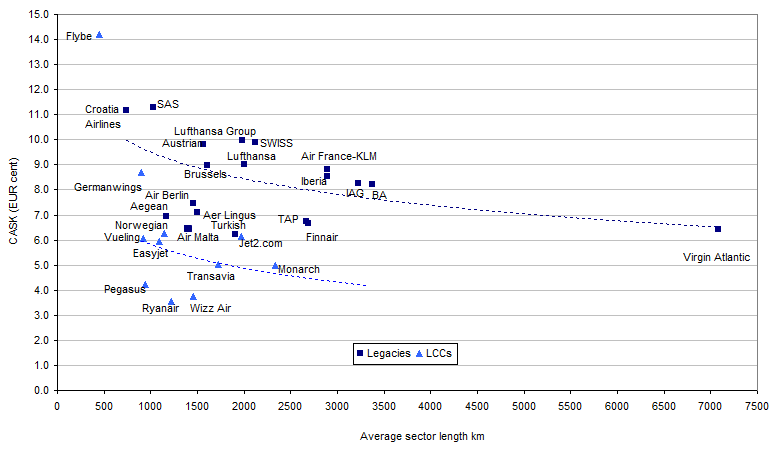