European airline shares rebounded with wider markets (26-May-2010), as investors purchased shares in companies that had been heavily sold off during the past few weeks.

Schroders Fund Manager, Andy Lynch, told Reuters the rebound was “to be expected given how far things have fallen”, but markets will remain uncertain due to the region's debt concerns. In key markets, UK’s FTSE (+1.6%), France’s CAC (+2.3%) and Germany’s DAX (+1.6%) all rose.

Aegean Airlines was one of only three carriers' stocks to have fallen at the end of trading, after reporting a net loss of EUR25.6 million for the three months ended 31-Mar-2010, compared with a profit of EUR4.6 million in the previous corresponding period. The decline was despite a 3% year-on-year rise in revenue for the quarter to EUR114.8 million.

Despite the disappointing financial results, the carrier reported a 17% rise in passenger numbers to 1.3 million. Load factor also improved, up 5.9 ppts to 62%.

Managing Director, Dimitris Gerogiannis, stated “the current crisis requires immediate response. Having secured the qualitative advantages and the critical alliances for a successful future path, it is now critical to focus on managing all the elements of our company’s costs in relation to capacity, network and fleet. It is going to be a challenging path but we are confident that we have the resources and elements to be successful."

El Al Israel Airlines (+2.2%) reported a narrower net loss for three months ended 31-Mar-2010, with a loss of USD16.5 million, compared with a net loss of USD39.8 million in the previous corresponding period. During the period, revenue rose 21% year-on-year to USD420.5 million, while operating costs were up 11% to USD363.6 million. Load factor for the quarter rose 2 ppts to 81%.

Aeroflot (+6.8%) had one of the biggest gains of the day. During trading, the carrier announced it held a meeting with Russian Technologies to establish a management committee to ensure the effective integration of FSUE GTK Rossiya, FSUE Kavminvodyavia, FSUE Orenburg Airlines, JSC Vladivostok Avia, JSC Saratov Airlines, and JSC Sakhalinskie Aviatrassy into the Aeroflot structure. Aeroflot's involvement with the six carriers' operations is a requirement of a cooperative management of assets agreement signed with Russian Technologies. 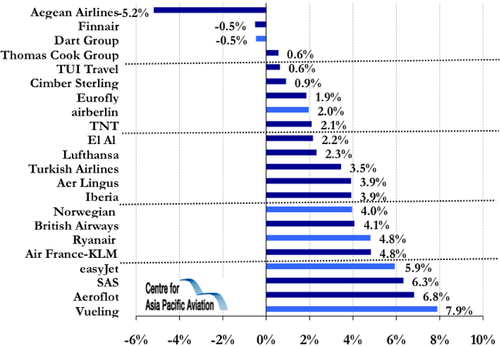