Aegean Airlines: no longer Europe's highest-margin FSC. Competition and the economy weigh in

After two years in which the Aegean Airlines Group had the highest operating margin among European full service airlines, its crown slipped in 2015. Its financial results for the year show a fall in operating profit and in net profit.

Double-digit capacity growth in a very weak macroeconomic environment, and in the face of strong competition led by Ryanair, put downward pressure on unit revenue. Aegean was unable to cut its total unit cost enough to offset falling RASK, in spite of lower fuel prices and some progress with ex fuel unit cost reduction, including improved labour productivity.

Nevertheless, although Aegean's operating margin slipped it remained fairly healthy at very close to 10%. Moreover, given the very challenging conditions faced in 2015, the group did well to limit the decline in the way that it managed. In 2016, slower capacity growth may ease downward pressure on unit revenue and the bottom line should benefit further from lower fuel prices post hedging, but Aegean will be focusing on reducing ex fuel unit cost.

In spite of the fall in profits, Aegean's board proposes a dividend maintained at EUR0.70 per share.

In both 2013 and 2014 the Aegean group reported the highest operating margin among European full service airlines. However, Aegean's crown as the most profitable European FSC slipped in 2015. This title was claimed by Icelandair, with an operating margin of 11.9%, very fractionally ahead of British Airways.

Aegean's margin places it in fifth place among FSCs and in eighth place overall among European listed airlines and their subsidiaries. Its 9.9% margin is still a fairly healthy level of profitability, but its fall in margin contrasts with margin improvement for every airline and group ranked ahead of it in 2015. 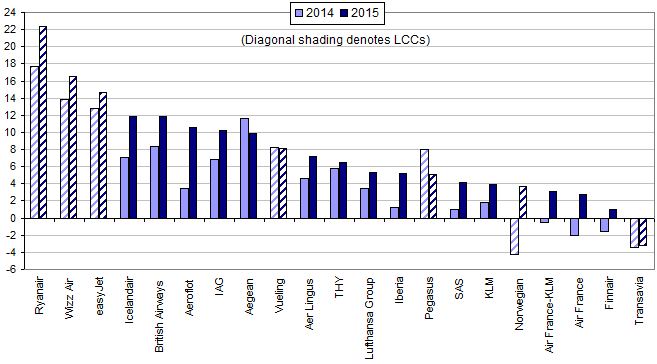 Note: calendar years except Wizz Air (2014 is year to Mar-15, but 2015 is 12M to Dec-15); easyJet (years to Sep-14 and Sep-15; SAS (years to Oct-13 and Oct-14)
Operating margin based on operating profit before exceptional items and before equity investments
Source: CAPA - Centre for Aviation, airline company reports

Although its operating margin dipped in 2015 relative to 2014, the Aegean Group has demonstrated that its 2013 acquisition of Olympic Air has been successfully integrated. Compared with 2013 proforma group figures (which show 2013 as if Olympic had been consolidated for the full year), Aegean's 2015 revenue was up by 16%, whereas its operating profit was up by 27% and its net profit by 30%.

Moreover, its 2015 results put further distance between Aegean and its loss-making years of 2010 to 2012.

Through a combination of organic growth and the Olympic acquisition, the group has expanded dramatically over the past decade. Compared with 2005, Aegean's 2015 revenue was up nearly three times (+189%), its operating profit increased almost fourfold (+283%) and its net profit more than quintupled (+407)%.

*2012 revenues and costs restated to exclude passenger airport charges (no impact on profit)
**Pro-forma 2013 Group results as if Olympic Air had consolidated for the full year
Source: CAPA - Centre for Aviation, Aegean Airlines

Aegean’s 2015 year-end cash balance of EUR228 million (including restricted cash and financial assets held for sale) was up by EUR11 million over the 12M and was equivalent to 85 days of revenue.

Load factor (total RPK divided by total ASK) dipped by 1.7ppts to 76.9% in 2015, the second successive decline in load factor and taking it well below industry average levels, broadly 80%.

Total passenger numbers increased by 15.2% to 11.6 million, outpacing the 8% growth in the Greek market as a whole. International passenger growth outpaced this, growing at 23.6% to account for more than half of the group's traffic for the first time. Domestic passenger numbers grew by 7.3% to 5.6 million.

Aegean's focus on international traffic growth, particularly at its main Athens base, took its share of international passengers at Greece's largest airport up to 35% in 2015, an increase of 10ppts since 2012.

This has mainly been driven by inbound tourism, which has grown faster in Athens than in the rest of Greece. According to data presented by Aegean, total tourist arrivals by air in Greece were flat in 2015, but increased by 24% in Athens.

Revenue growth of 7.8% was slower than growth in ASKs and passenger numbers, reflecting both the weak economic backdrop in Greece and the highly competitive nature of the airline market.

Scheduled passenger revenue increased by 10.5%, while charter revenue fell by 25.5%. According to CAPA calculations, total revenue per ASK (RASK) fell by 10.4%.

Total operating costs increased by 10.9%, which was less than the increase in ASKs but faster than the growth in revenue. Fuel costs, the largest category, fell by 7.1% despite capacity growth, thanks to lower market prices.

Ex fuel costs increased by 18.1%, which was faster than the ASK capacity increase. To some extent, this was due to items that are largely outside management control, most notably airport charges (+35.6%) and navigation charges (+24.5%). However, maintenance costs (+25.8%) and distribution costs (+20.6%) were also up sharply.

Labour costs, the second highest category, grew by 8.9%, slower than ASK growth and slower than the 17.9% increase in head count.

According to CAPA calculations based on cost at the EBIT level, unit cost (cost per ASK, CASK) fell by 7.8%, less than the drop in RASK. Ex fuel CASK fell by 1.6%.

On a conference call with analysts to discuss the 2015 results, Aegean management admitted that it was now more difficult to make further cost savings, but said that distribution and maintenance costs would be areas of focus.

Distribution cost savings are anticipated from an increase in direct sales and reduced GDS distribution. In particular, Aegean is to use the Olympic brand in the domestic market, where sales will no longer be available through the GDSs.

In 2016, Aegean plans to add three aircraft to the group fleet, fewer than the eight added in 2015. It will increase seat capacity by 1.1 million to 16.2 million – growth of 7%, a slower rate than in 2015. Growth will be focused on international routes, of which Aegean plans to add 14, while the number of domestic routes will remain unchanged.

Speaking on the FY2015 conference call management said that 80% of the group's growth in 2016 would be at Athens, with Heraklion and Rhodes taking the balance of the capacity increase. Bases at Kos and Corfu have been discontinued. Aegean is optimistic that Greek tourism trends will be positive in 2016 and anticipates that Russian passengers could come back since other destinations are not open to them.

Management also referred to indications of demand from elsewhere, but added that this had faded somewhat in the past two weeks following the attacks in Brussels.

Aegean's international capacity at Athens will grow at a double-digit rate in 2016, while management expects competitor capacity in this market to grow at mid-single-digit rates. This is around half the competitor growth rate of 2015, making for a more benign market environment this year, and Aegean expects a further market share increase in the international market.

Domestic competition, led by Ryanair, is set to remain fierce and Aegean anticipates a further fall in domestic market share in 2016. Moreover, the Greek consumer remains "challenged by unemployment and increasing taxes", according to Aegean management. 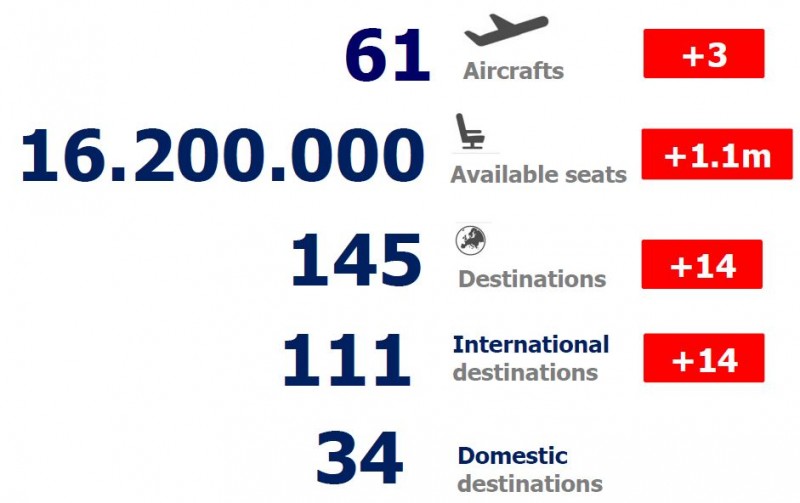 2015 was a good effort in a very challenging environment

The Aegean Airlines group's results in 2015 were highly creditable in spite of the decline in operating profit and operating margin. It faced significant challenges from the Greek macroeconomic and political environment, including very weak GDP and the imposition of capital controls. On top of these issues, it faced very strong competition from Ryanair in both the international and the domestic markets. In addition, Aegean had another year of double-digit capacity growth.

Little wonder that RASK fell. Aegean's priority in such an environment must be to ensure that CASK falls at a greater rate. In spite of lower fuel prices (Aegean's average fuel CASK fell by 22.8%), it was unable to do this in 2015.

In 2016, Aegean's slower rate of capacity growth may help to ease downward pressure on unit revenue. Slower competitor growth in Athens should also help in this regard. There should also be further help in CASK reduction from fuel prices. Nevertheless, ex fuel CASK reduction should remain a priority.