After three successive quarters of reporting falling operating results, Aegean achieved a EUR10 million improvement in its 3Q2015 operating profit. Its result for the seasonally strong peak summer quarter helped to offset the reduction in profit suffered in 1H2015, bringing its 9M2015 operating result to the same level as last year.

However, Aegean is having to work harder by growing revenue to get the same profit. Moreover, even achieving the same profit has required a considerable helping hand from lower fuel prices. In 3Q2015, Aegean did manage to bring down its ex fuel unit cost, but total unit cost only managed to keep pace with the reduction in unit revenue thanks to savings from fuel.

Aegean's key challenge remains the very soft pricing environment in Greece, the result of economic weakness and strong competition from ultra LCC Ryanair, the country's second biggest airline. In 2014, Aegean was the highest margin full service airline in Europe and should remain close to the top of this category in 2015. However, it cannot let up in the battle to remain competitive with the likes of Ryanair.

The Aegean Airlines group's results in 3Q2015 were stronger than in 1H2015, with net profit growing by 7% to EUR67 million and operating profit (EBIT - earnings before interest and tax), which more closely reflects the underlying performance of the business, increasing by 12% to EUR96 million for the quarter. Revenue grew by 12% in 3Q2015 to EUR389 million and the operating margin was almost stable at 24.7% (-0.1ppts).

However, the weaker 1H results meant that operating profit for 9M2015 was only flat at EUR109 million and, with revenue up 8%, the 9M operating margin was down 1.1 ppts at 13.7%. Aegean's 9M operating margin still places it ahead of Europe's major legacy airline groups and behind only Icelandair's 15.0% margin among European FSCs.

However, its margin is below those of the leading LCCs, which have improved their profitability so far this year (Ryanair's operating margin gained 5.2ppts to reach 25.8% in the first nine months of calendar 2015). With 3Q2015, Aegean has at least arrested the slide in its margin and will be looking to grow it once more from 4Q2015.

Load factor was down 1.3ppts to 78.1% for 9M2015 (calculated as total RPK divided by total ASK and different from the scheduled load factor figures in the table below).

The airline said that international connecting passengers via its Athens hub have doubled over the past three years. 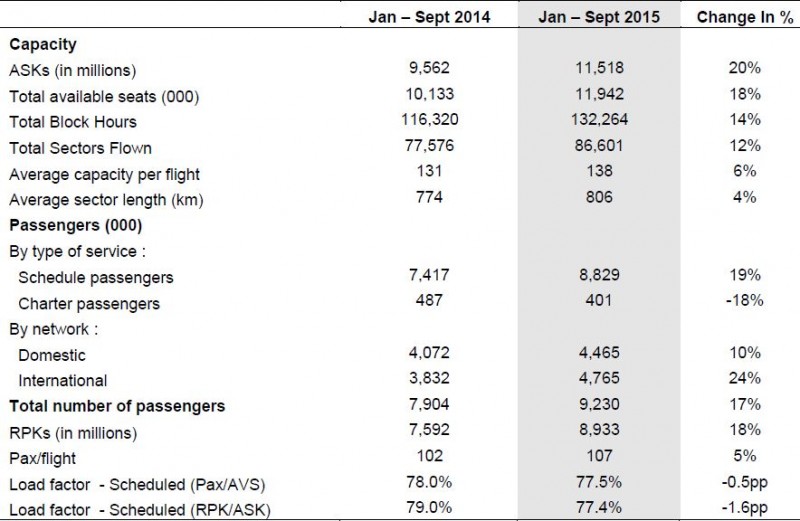 Aegean's operating costs grew by 12% in 3Q2015, less than the increase in ASKs, but in line with the growth in revenue. Fuel costs fell by 7%, in spite of the capacity increase, as a result of lower fuel prices. Ex fuel costs grew at the faster rate of 21%, but this was still less than ASK growth in 3Q2015.

RASK versus CASK trend evens out

Profitability for an airline is, very simply, a function of RASK versus CASK. If RASK growth exceeds CASK growth, the airline's operating margin increases and vice versa. For Aegean, RASK growth exceeded CASK growth in the first three quarters of 2014, but this reversed in 4Q2014. Moreover, the difference between the two growth rates was on a deteriorating path through 2014 and into 1Q2015 (see chart below).

Since 1Q2015, however, the deterioration has started to reverse. In 2Q2015, although RASK continued to fall more quickly than CASK, the difference between the two growth rates started to reduce. In 3Q2015, both RASK and CASK fell at almost the same rate. 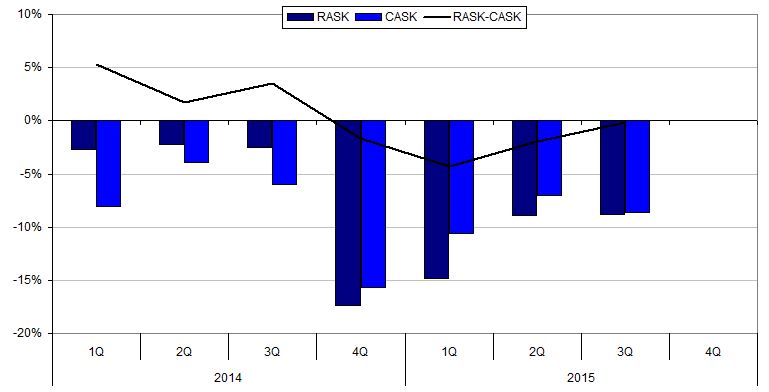 There are three main factors underlying Aegean's RASK decline. These are the weak and uncertain Greek economic backdrop, increased competition from Ryanair in Greece and lower fuel prices. These factors are unlikely to ease dramatically in the near future.

Its biggest competitor is Europe's lowest cost airline operator Ryanair. Ryanair's cost per ASK was more than 45% below Aegean's in 2014. This means that Ryanair's fares can significantly undercut those of Aegean. Moreover, Ryanair's more extensive fuel hedging programme means that much of the benefit to it of lower fuel prices is still to come in 2016, even if market prices for fuel start to rise once more.

This may lead to reductions in Ryanair's fares next year, adding to the downward pressure on Aegean's RASK. 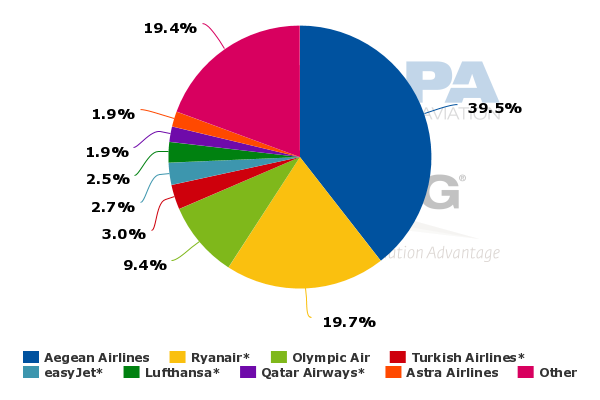 Aegean's fuel benefit to CASK is likely to diminish

Aegean's CASK reduction has been driven by two main factors. The most important is lower fuel prices and the other factor is efficiencies resulting from the ongoing integration of Olympic Air (acquired in 4Q2013) and management's focus on costs.

Although Aegean engages in fuel hedging, its fuel hedging programme is of a more limited extent than that of Ryanair and so it is more directly exposed to fluctuations in the market price of fuel. This has benefited its cost base this year, but, barring another dramatic drop in oil prices (which seems unlikely), it will need to work much harder on non-fuel costs next year in order to maintain its margin in the face of likely downward RASK pressure.

As CAPA noted at the time of Aegean's 1H2015 results, its business is proving to be fairly resilient in a difficult year in Greece, characterised by capital controls, bank closures and an uncertain political climate.

It is now within touching distance of beating FY2014's record operating profit of EUR106 million and, although this will be achieved with higher revenues and, therefore, at a lower margin.

Aegean looks likely to remain among the more profitable European full service carriers in 2015, but as Ryanair's margin expands, the profitability gap to its principal LCC competitor is widening.