Aegean Airlines (-6.0%) slumped after HSBC cut its price target for the carrier from EUR5.50 to EUR3.60, while maintaining its ‘overweight’ rating. Aegean ended trading at EUR2.50.

A 3.7% decline in the Athens Stock Exchange, pushed lower by the banking sector, also hurt the carrier.

Lufthansa (-2.0%) followed the wider market lower for the day. During trading, it announced it has reached an agreement with its pilots over a pay dispute via arbitration. The carrier and its pilots union agreed to a guarantee of job security in exchange for a salary freeze until Mar-2011, averting the threat of future strikes. The carrier employs approximately 4500 pilots, who had expressed concerns that the airline could increasingly shift routes to foreign units where pilots earn less, following Lufthansa's rapid expansion over the past two years.

Jet2.com up on pre-tax profits 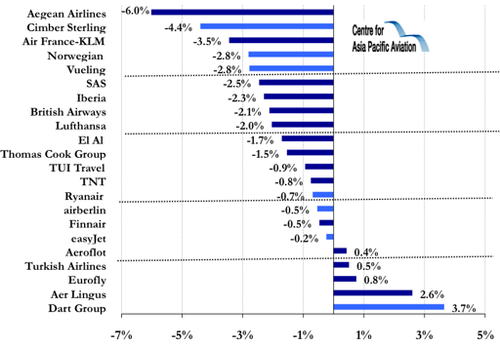