Boeing's 777-300ER was a late bloomer. The variant rolled out in 2002 and had its first delivery in 2004. Yet half of the variant's orders were placed in 2010 and beyond. Two of its record years of sales, 2007 and 2011, coincided with sharp rises in jet fuel, resulting in airlines accelerating retirement of their four engined aircraft. Boeing largely kept business within the family, as the 777-300ER effectively rendered the 747 obsolete; Airbus' A340 succession plan was not so clear.

The world's most powerful twin-engine has come to define the long haul fleets of its biggest operators. The largest, Emirates, operates 114 – almost as many as the next three largest operators combined: Cathay Pacific (53), Air France (40) and Qatar Airways (31). The -300ER variant has 796 orders, comprising over half of all orders for the 777 family. A late bloomer became popular. In Feb-2016 SWISS commenced 777-300ER services, its first time operating the 777. United and Kuwait Airways will also take their first -300ERs in 2016. Orders have slowed since the 777X came into the picture, and in Jan-2016 Boeing announced a production decrease. Boeing still needs to sell new 777s to bridge the production gap until the 777X, but airlines are focusing on growth through second hand acquisitions: British Airways is interested, while Turkish Airlines is taking Kenya Airways' -300ERs. 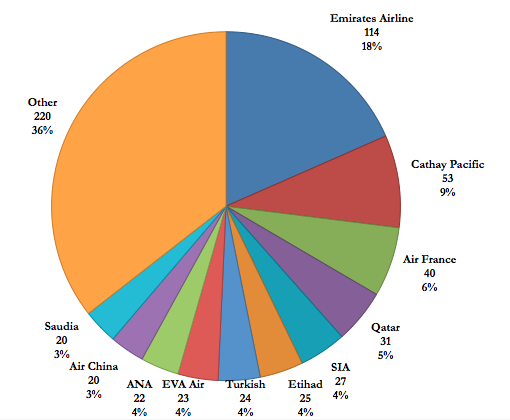 On the other end of the spectrum, Garuda Indonesia (operating fleet: 10) received its first -300ER in 2013 and its most recent was manufactured in Jan-2016. 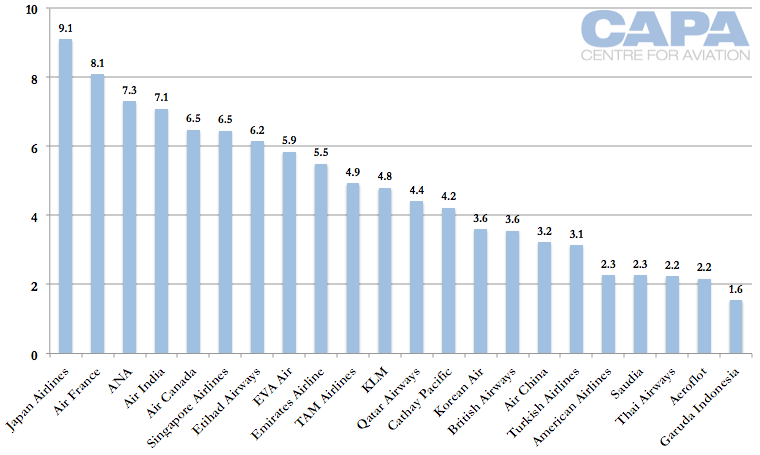 Many of the largest 777-300ER operators were late adopters

Aside from Emirates and Air France, it is perhaps surprising that the 777-300ER is as prominent as it is with the airlines that operate the most 777-300ERs; many other operators were late adopters or built up their fleet only in recent years.

Emirates and Air France were early operators (Air France the first) and had quick build-ups of the type in their fleet. In 2006, Emirates operated more 777-300ERs (23) than any other airline and has been the largest operator every year since, now amassing a fleet of 114 777-300ERs, a figure slightly less than the the next three largest -300ER operators combined. 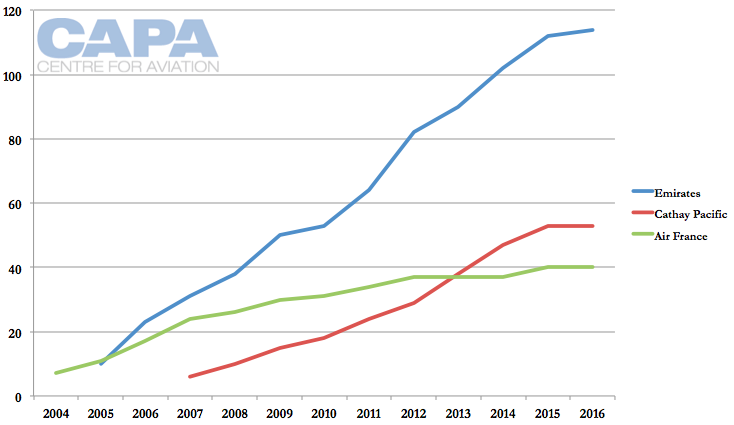 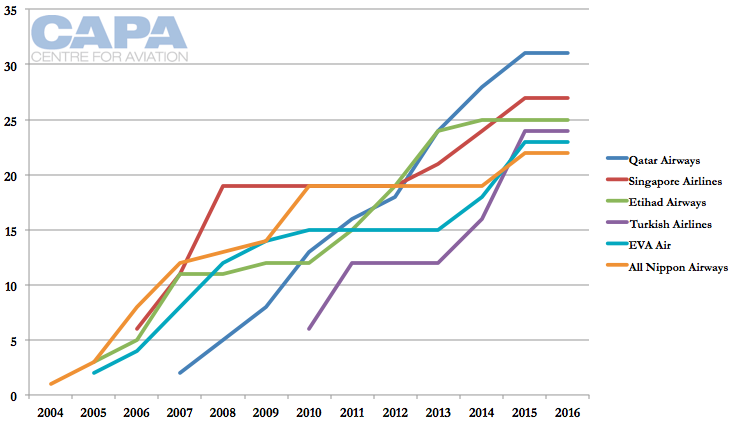 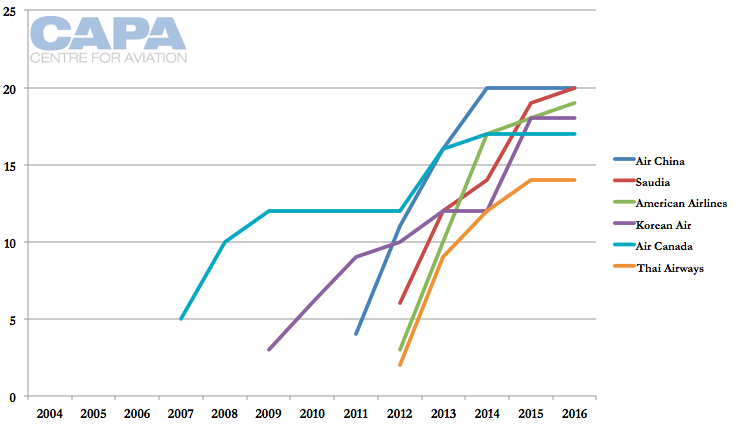 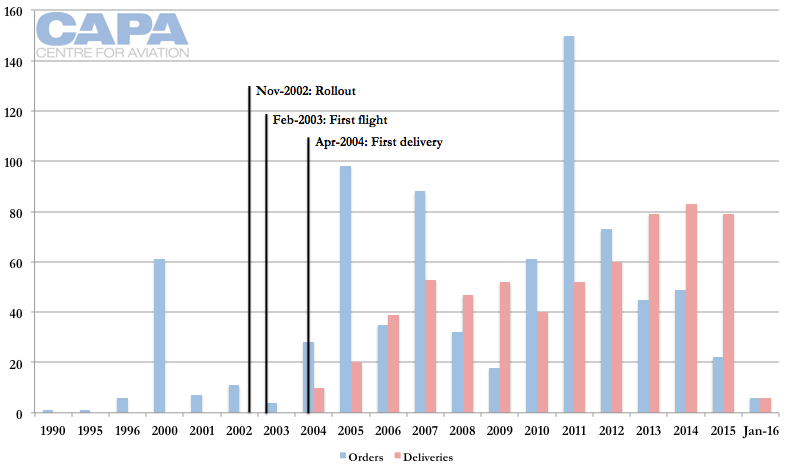 The 777-300ER's orders had their second best year ever in 2005 with 98 orders (at the time, a record). This was the year after the -300ER's entry into service, a period that airlines have sometimes waited to pass before ordering. Entry into service gives feedback, operational to passenger, and can measure achieved gains versus those sold. (The -300ER's performance has been significantly improved from when it was first sold.) Yet this order spike in 2005 coincided with an increase in jet fuel prices. Jet fuel (WTI) averaged USD57 a barrel in 2005, up from 2004's USD42 and 2003's USD31, an 83% increase over two years and a doubling over three years. 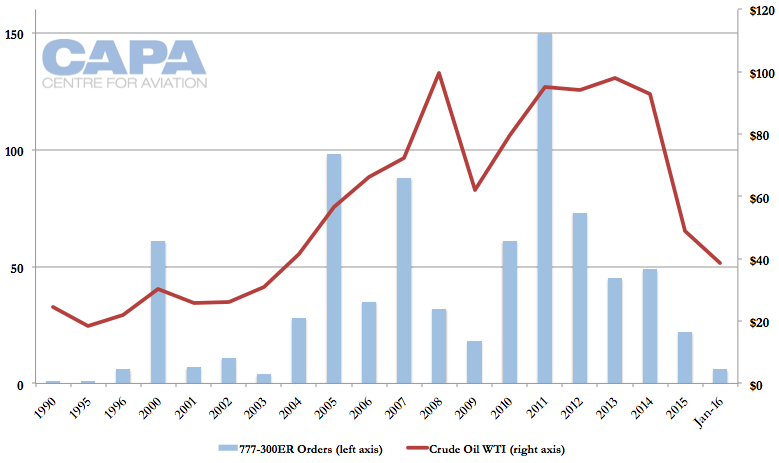 Source: CAPA - Centre for Aviation, Boeing and US EIA

There have been 13 individual orders for more than 10 777-300ERs. After the largest, from Emirates in Nov-2011 for 50, the second largest order was for half the number of frames (24) and was also placed by Emirates (in Nov-2005). The third largest order, for 20 from China Eastern, was placed in Dec-2012 and is one of three large (over 10 frames) orders placed since 2010. Of the 13 orders for more than 10 777-300ERs, Emirates accounts for five. It is Middle East and Asian airlines that have placed the top orders, with the exception of Turkish Airlines and lessor ILFC. 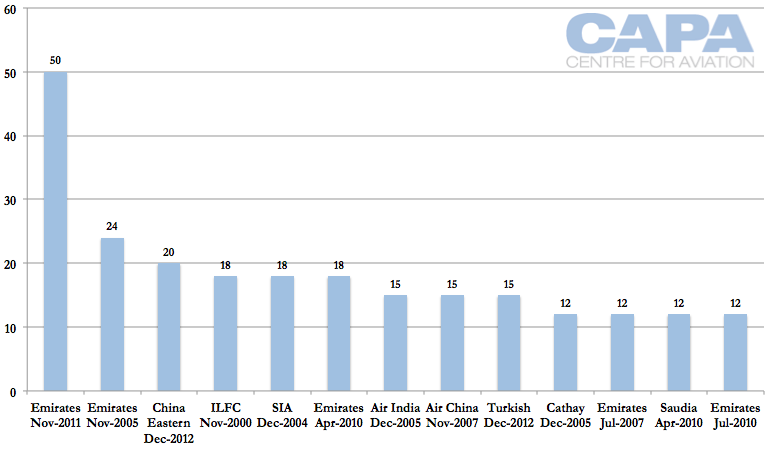 2007 was the busiest for the 777-300ER in terms of new customer deliveries. That year five new commercial operators of the -300ER were added. The pattern in most years was three new customers. After four new customers in 2014 (including three in greater China: China Airlines, China Eastern and China Southern), there were none in 2015. There will be three new operators in 2016: SWISS, United and Kuwait Airways. 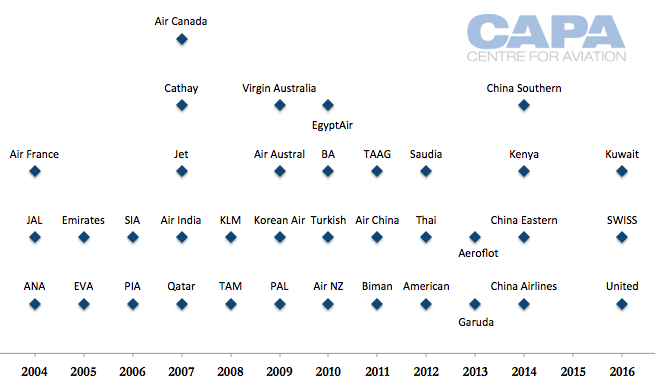 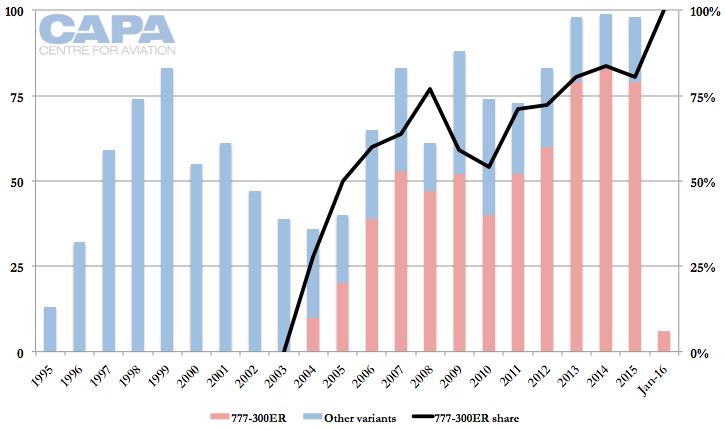 Bridging the 777 classic until the 777X arrives: half of production sold

Since Boeing announced the 777X there has been much interest in how it will "bridge" sales of its current 777 with the 777X, which is due to be delivered from 2021. The 777 is believed to be Boeing's highest-margin aircraft. The 777X represents a leap in efficiency over the existing 777 family, so the last few years of 777 classic production could be undesirable models, since they will be quickly outpaced by the more efficient 777X.

Although much has been said of this cut, it merely brings Boeing back to pre-2012 levels. Prior to 2012, Boeing delivered more than 84 777s a year only in 2009, with 88 delivered; 1999 and 2007 came close with 83 deliveries each year. The question is whether Boeing can maintain output at 84 a year or needs to make a further revision.

To maintain its production forecast, Boeing needs to deliver 430 777 classics from Feb-2016 through 2020. There will also be some 777 classic deliveries in 2021, although the exact number is unclear since it depends on which month Boeing stops 777 classic production.

Assuming all aircraft in the backlog are delivered, Boeing has sold under half of its remaining "bridge" capacity. Yet this varies considerably by year: while 2016 production looks good and 2017 is forecast to have approximately two thirds of production sold, 2018 is forecast to have one third of production sold, and 2019-2021 have minimal sales. Boeing has not released exact guidance on its backlog by year and these are only estimates. 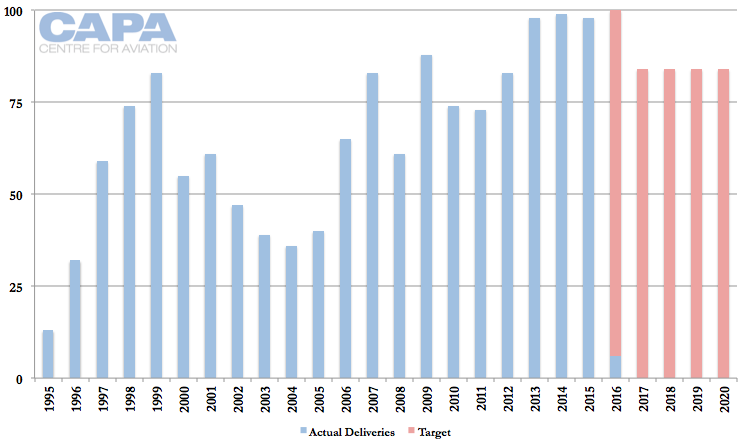 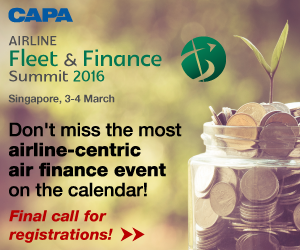 The faint prospect of a second hand 777-300ER market received attention in Jan-2016 with IAG CEO Willie Walsh remarking that the airline's 12 777-300ER fleet entered BA's fleet too late, but BA could consider taking second hand 777-300ERs. Mr Walsh, as reported by Leeham News said: “another opportunity we also look at is leasing 777-300ERs. We brought the 777-300ER late into our fleet, actually too late. It is a very effective and flexible aircraft. We now see that we could need more and once again we are prepared to lease these...We will go for used aircraft and lease them. It shows how BA has changed; we are prepared to adapt to a changing market and to take opportunities that come our way."

Emirates, and more recently Cathay Pacific, have been considered sources for airlines taking second-hand 777-300ERs (the two are also the largest operators). Turkish Airlines has taken the 777-300ERs disposed of by Kenya Airways, but these were relatively young and only a handful. Cabin refits would often be necessary, but all -300ERs use the GE90 power plant.

777 bridge sales may not be strong but forecast output is still at relative highs.

Time – and discounts – could produce further sales. Meanwhile the 777X, with a healthy 300 orders, will carry Boeing into its third and probably fourth decade of the 777 family.