ERA Director General, Mike Ambrose, lamented that the tsunami has been "watched in Europe by many states, politicians and regulators with dispassionate and self-interested indifference”. He added, “pitifully little attention has been given by either the European Commission or the Parliament to the difficult situation faced by stakeholder companies in European air transport.”

Mr Ambrose welcomed the progress on SESAR and the Single European Sky Package II, but urged governments to continue to invest in the development of new capacity, “to be ready when traffic inevitably returns".

ERA members recorded a 7.2% reduction in passenger traffic in 1H2009, noting that while demand improved in the second quarter, “costs are rising and yields are dangerously low”.

Mr Ambrose concluded “there may be signs of a slow recovery in some states, but overall traffic levels are still extremely depressed, while yields continue to reduce.

European airline shares were generally positive yesterday, with Eurofly adding 1.3%. Of the larger carriers, SAS gained 3.2% on a bargaining breakthrough with one of its many unions, while Air France-KLM gained 0.5%.

Lufhansa rose 1.4% as it announced the appointment of Jet Airways CEO, Wolfgang Prock-Schauer to head up UK carrier, bmi. 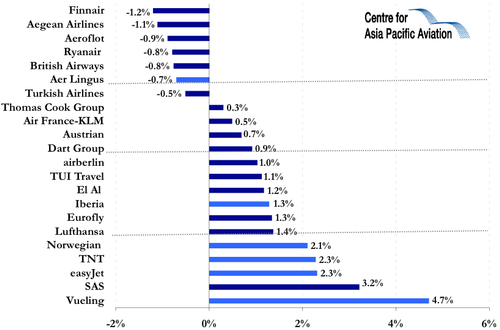