1time falls on ownership news; Vueling feels the heat in the EU

News of Virgin Blue’s attack on Qantas’ share of the corporate market continues to make news in the Australian business community. Virgin Blue pared Thursday’s fall to close up 3.5%. The ASX200 also gained on Friday.

Shares in AirAsia advanced 2.4% to MYR2.61, its highest close since 22-Oct-2010. AirAsia last week revealed strong third-quarter results with third quarter net profit more than double in the quarter on the back of higher operating revenue and improved yields.

1Time falls on ownership shake up

1time closed down 2.6% on Friday. The LCC has finalised a USD9.2 million (ZAR65 million) agreement to sell a 25% stake in the company to Mtha Aviation and SKMT Sunrise Investment Group. The capital will be used to fund expansion and develop its facilities at Safair Technical, it MRO division. The transaction will see 1time issuing a further 70 million shares at a price of approximately 93c a share.

Vueling was 2.1% weaker on Friday as risky Spanish bonds and equities were sold off as Spain was identified as another weak spot in the euro zone. Spain’s Ibex 35 index weakened 1.8%.

All other European LCCs, with the exception of Dart Group, also lost ground on Friday. In the US, despite the short session and thin trading volumes, almost all LCCs closed lower. JetBlue was stable. 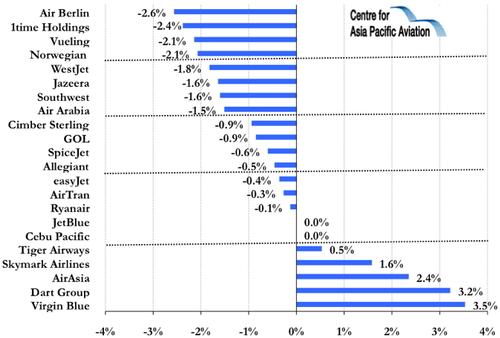