The long haul low cost business model still has only one pure play practitioner, although a growing number of airlines are trying it out and there is a clear opportunity to make it work.

CAPA’s CASK model: A direct comparison of cost per available seat kilometre (CASK), or unit cost, for different airlines is not straightforward as it varies with the average distance flown. In general, the cost of producing a seat kilometre falls as average trip length increases. Plotting CASK versus average trip length allows the relative cost efficiency of different airlines to be compared visually. 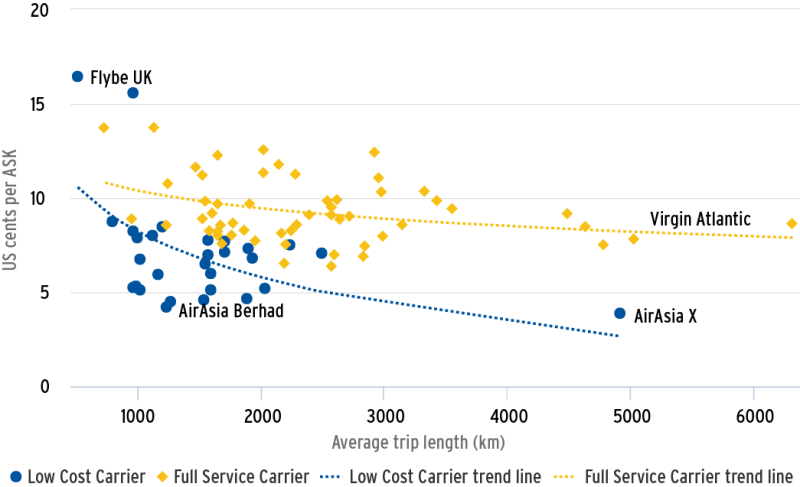 In the Americas, particularly in the US, the unit cost gap between low cost carriers and full service carriers is narrower than in any other major world region, as measured by cost per available seat kilometre.

This reflects two main factors. First, the major US FSCs have all been through a process of cost reduction, including time in Chapter 11 bankruptcy protection which helped them to restructure labour costs in particular. They were the first to face LCC competition and the first to respond to it.

The second factor is that a number of longer-established LCCs have evolved from the purist low cost model to take on some of the product and service features of FSCs. This has led to cost creep in a few cases and the chart on page 64 shows there are LCCs, such as Southwest, that are positioned very close to some of the more cost efficient FSCs in the region.

The narrowing of the CASK gap between FSCs and LCCs in the US has facilitated the development of the ultra low cost carriers (ULCCs). The ULCCs have levels of unit cost significantly lower than those of the airlines that pioneered the low cost concept. However, the ultra LCCs of the US have unit costs around the US6c mark, higher than the US5c level of the lowest cost operators in other world regions.

Just as low cost competition forces cost discipline on incumbents, the lack of it can cause legacy carrier unit costs to remain high. Looking outside the US market, there are two legacy airline groups, based in Latin America and Canada, with CASK levels that are higher than might be expected from their average trip length. This may reflect the lesser degree of low cost competition faced by these two groups compared with the US. Nevertheless, Latin American FSC group Copa would not look out of place among the LCCs in terms of its level of CASK. 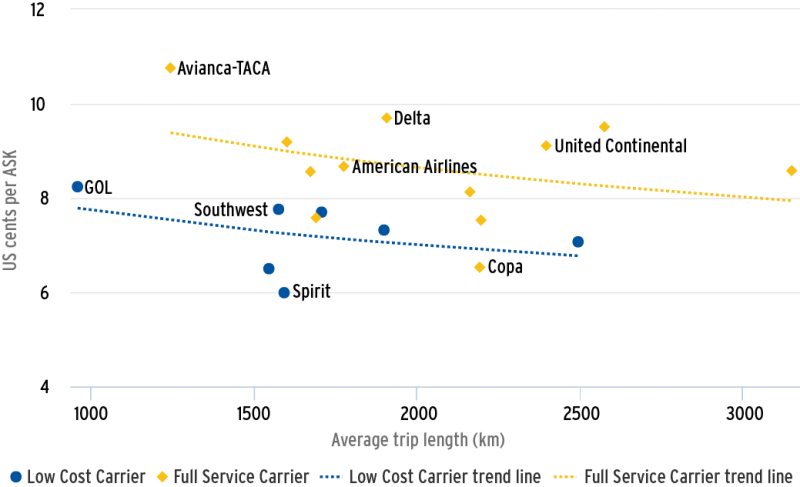 Comparing CASK levels in the Americas with other global regions can also be revealing. More than in other parts of the world, the airlines of the Americas operate mainly within their own region, with no long haul specialists. This shows itself in the relatively tight distribution of average trip lengths, with the majority of airlines on the chart packed in between 1,500km and around 2,500km.

It is the long haul markets that are the battleground for the growing global competition between airlines of different regions. By focusing on their own domestic and intra-regional markets, airlines from the Americas have conceded a big head start to airlines in other regions in the race for global pre-eminence.

This approach risks forcing them into ever-decreasing circles of attempting to raise protectionist barriers around their own territory. They would perhaps be better off looking for ways to lower their unit cost and to improve their product quality, giving themselves the means to go on the offensive against the rest of the world. 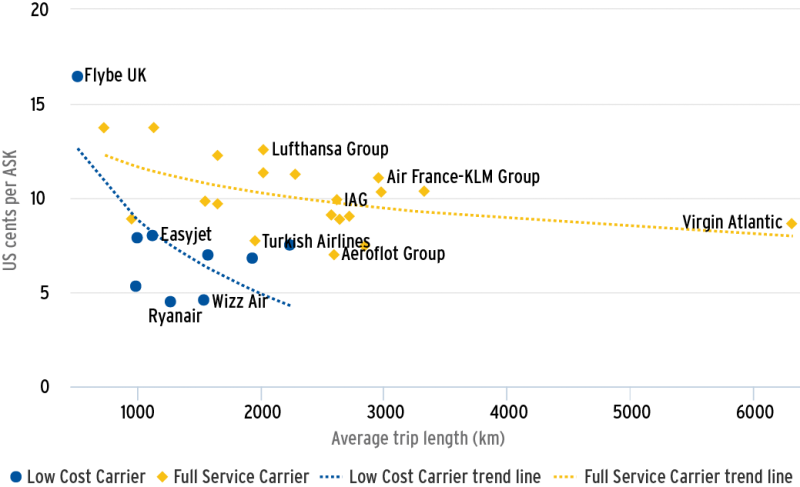 In Europe, there is a clear divide between FSCs and LCCs, although there are some cost-efficient FSCs that are close to LCC territory (see chart above). The higher cost European FSCs, those that sit well above the FSC trend line, are mainly those that are part of the bigger European legacy airline groups, particularly Lufthansa and Air France-KLM. As a group, European FSCs are longer haul than their American counterparts, but less so than those from the Asia Pacific & Middle East region.

The European LCCs can also be sub-divided into two groups, with a lower cost ultra LCC category clearly distinguishable. The three European ULCCs, Pegasus, Wizz Air and Ryanair, are in the same US5c CASK ball park as the lowest cost Asian LCCs. Given that Europe is a relatively high wage region and that labour is one of the key costs for most airlines, this is a significant achievement.

Perhaps the most important observation for European FSCs is that, on average, they are the highest cost carriers in the world. Not only do they face significant price based competition on short haul from the continent’s increasingly powerful LCCs, but they also face growing competition on long haul from cost efficient and high service quality airlines in the Middle East and Asia.

This emphasises the need for further cost restructuring even by those that have already made good progress, especially if low cost long haul really does strengthen its hold.

The gap between FSCs and LCCs in the Asia Pacific & Middle East region is generally wider than in any other region (particularly in the Americas, where there has been the greatest degree of cost convergence). Asia Pacific has more long haul airlines than the other regions, positioning it well for competing for global traffic flows.

The Asia Pacific & Middle East region includes the world’s lowest cost LCCs and some of its most cost efficient FSCs, but also some very high cost FSCs. The concept of low cost long haul only really exists in the form of AirAsia X. Apart from this carrier, Asia’s LCCs do not have longer average sector lengths than in other regions.

CASK levels of FSCs in the region can broadly be divided into those from the region’s more developed/industrialised nations and those from its emerging economies. Japan, Korea, Australia, New Zealand, Taiwan and Hong Kong are all home to Asia Pacific’s higher unit cost FSC airlines. The airlines with CASK below the FSC trend line for Asia Pacific & Middle East are generally based in emerging markets, where wage costs tend to be lower.

The higher cost Asia Pacific FSCs, such as Korean Air, would not look out of place on a similar chart of CASK versus average trip length for European FSCs. This helps to explain why a number of them have established LCC subsidiaries and associates, often based in the lower wage economies of the region.

The challenge for the Asia Pacific FSCs based in the higher cost economies of the region is clear: they must further reduce their costs. They are among the world’s least cost efficient airlines, as defined by the level of CASK for a given average trip length. They compete in the same region with most of the world’s lowest cost LCCs and with most of its more cost efficient FSCs. Moreover, they are typically higher cost producers than FSCs from the Americas and this puts them at a disadvantage on trans-Pacific routes. Many of them have no cost advantage over European competitors and face a growing threat from Gulf carriers on Asia Pacific-Europe routes.

Some of Asia Pacific’s lower cost FSCs, such as Philippine Airlines, have levels of unit cost that are as low as any FSC in the world and not inconsistent with LCCs in other regions. This gives them significant potential to develop more strongly beyond their local markets.

For the more cost efficient Asia Pacific national airlines, the challenge is to develop their product, network and brand to differentiate themselves from the LCCs, while comfortably under-pricing their higher cost (but generally better branded and bigger) FSC competitors.

The LCCs of the Asia Pacific region face the challenge to retain, or reduce, what are already very low levels of CASK (in many cases), in order to compete with FSCs with bigger networks and brands that are better established globally. There is also the question of whether the long haul low cost model can firmly establish itself as sustainably profitable.

Asia Pacific & Middle East is already the largest world region by ASKs and it has the highest number of aircraft on order. It benefits from large population levels and higher economic growth rates. It also has a relatively high number of long haul, global airlines and several with very efficient unit cost levels. These factors should ensure that the region remains highly competitive on a global scale for the foreseeable future.