The latest round of Ryanair's aircraft purchase negotiations through the press may indicate a troubling truth for the carrier: its business is not wanted.

For a potential 300 aircraft order, which has been lingering since 2009, Ryanair wants the favourable pricing it secured in 2002 for 100 B737s. Back then the industry was at rock bottom and Boeing was eager to sign for 100 aircraft. Now, even after a recent depression and possibly entering a second, narrowbody backlogs are hearty – and more diverse. Boeing has acknowledged its market outlooks from the last decade did not foresee the rapid growth of LCCs, and especially from those based in Asia Pacific. This larger pool gives airframers more potential customers to woo, and the customers may pay Boeing more than whatever deep discount Ryanair CEO Michael O'Leary extracts, or they may pay the exact same but be more pleasant to do business with.

Mr O'Leary's latest ploy is not to coerce Boeing into signing by threatening of talking to competitor Airbus, but instead mulling once again a purchase of Russian aircraft, an option Mr O'Leary recently re-affirmed to the Financial Times. The aircraft of potential interest is Irkut's MS-21, whose baseline 162-seat model may be stretched into variants seating up to 230, more than Ryanair's B737-800s seating 188 (or 194 if Ryanair has its way and removes lavatories).

The discussions follow a stunt Mr O'Leary put on in June in central Paris while the rest of the industry was at Le Bourget for the airshow. Mr O'Leary announced a partnership with Chinese manufacturer Comac to help develop the company's narrowbody C919 aircraft – and, one day, maybe, order it.

The deal is understood to have occurred only after Boeing again balked at Ryanair's pricing demand, and the Irish carrier subsequently thought to make noise in Toulouse so Seattle would come to terms. But Airbus gave no time to Ryanair; Mr O'Leary now says the two are not in discussions. Airbus knew interest from Ryanair was part of a game and any proposed price would be counter-offered, taking up its time that could be better spent on other customers – like AirAsia's Tony Fernandes.

While signing for 200 A320neos at Le Bourget, the LCC co-founder and current CEO gave a candid speech describing his friendship – long-term, supportive and with jovial nights – with Airbus COO customers John Leahy and CEO Tom Enders. AirAsia certainly negotiated, but Airbus also got a friend. Airbus has also received orders for higher-margin widebodies, first the A330 and then A350 XWB for AirAsia's long-haul affiliate AirAsia X, which is still mulling a top-up order. Boeing has its confidants in Southwest and Lion Air, amongst others.

Saving 300 narrowbody slots otherwise given to Ryanair allows Boeing or Airbus to offer the slots to a customer who will potentially purchase widebodies (like American Airlines has done), or offer the slots to a potential customer with more tantalising business. (If Ryanair ever makes word on its ambition to go long-haul, it will acquire aircraft based only on price.)

Boeing and Airbus no longer need Ryanair, a difficult customer even after purchase contracts are signed. In another example of LCC modus operandi, after a different ultra-LCC pulled out of an airport, the operator shrugged the loss despite jubilant speeches and photo ops months earlier. The reasoning was the operator found the LCC difficult to work with on an ongoing basis, and the airport's efforts were better spent elsewhere.

If Boeing and Airbus do not budge on their offers, the question for Mr O'Leary is if he will place the biggest bet yet for the airline by entrusting its clockwork operation and high-octane growth to an emerging aircraft from an emerging supplier. Or if for the first time in recent memory Mr O'Leary will show humility and go back to his acquaintances in Seattle.

Ryanair's growth questioned, but it is achievable

On the growth side of the story, of which some are skeptical, Mr O'Leary said he would like to see Ryanair's passengers numbers, 72.1 million last year, grow to 120 million-130 million. It is an entirely plausible scenario, especially since Mr O'Leary did not put a timeframe on it. 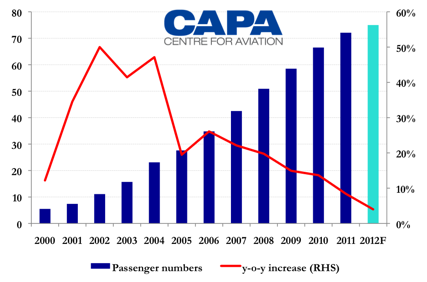 He would like to suggest time is not of the essence when it comes to ordering aircraft to fuel the growth (if 300 aircraft are ordered, about two-thirds of them can be expected for growth with the remaining third for replacement of older B737-800s). Ryanair last year paid its first dividend – EUR500 million – after saying it had no purpose for the funds since it would not be purchasing aircraft. Mr O'Leary indifferently told the Financial Times another dividend could occur in 2012/13 and another in 2014/15, with the implication funds would be available if Ryanair still does not secure the aircraft pricing it wants.

But with a 2014/15 dividend Ryanair runs the risk of falling behind in having aircraft on order for continuous growth. The carrier last month had 35 B737-800s left to be delivered according to Boeing, but with lead times on manufacturing aircraft, Ryanair simply cannot replenish stock instantly, so the mention of future dividends, occurring when Ryanair should be using the funds to purchase aircraft, are further negotiating tactics.

Ryanair B737-800 (only operating type) aircraft orders and deliveries direct from Boeing: through Sep-2011

Once aircraft arrive, there is no risk Ryanair will run out of growth opportunities, as those familiar with market outlooks will know. Boeing predicts European airlines over the next 20 years will require 5662 narrowbody aircraft. Airbus expects intra Western Europe traffic (measured by revenue passenger kilometres) to double over the next 20 years.

Growth, Airbus noted in its recent market forecast, is driven by liberalisation that opens new markets to LCCs. "In May 2004, eight central and Eastern European countries became members of the EU, and also members of the single European aviation market, a liberalised market. This resulted in a rapid entry of low cost carriers (LCCs), with these new entrant countries quickly becoming a key growth area for air traffic in Europe."