Zurich Airport’s shares lifted 8% yesterday as smaller rival Geneva Airport (one of the earliest in Europe to disclose its monthly traffic) reported just a 0.5% reduction in passenger numbers in Apr-2009, to 983,761, following a steep 15.4% reduction in Mar-2009. However, the reduction in aircraft movements at Geneva widened to -9.5% (from –7.3% in Mar-2009), signalling airlines are striving to improve their load factors to regain pricing traction.

Geneva’s improved performance, supported by the timing of Easter in April this year, augurs well for Zurich – or so investors believe.

Elsewhere, Fraport shares eased 1.2%, despite comments to TREND by CEO, Wilhelm Bender, that he was encouraged by Apr-2009 traffic data (to be released shortly) and that passenger nervousness over the swine flu outbreak was “marginal”. Frankfurt Airport reported a 9.2% reduction in passenger numbers in Mar-2009. 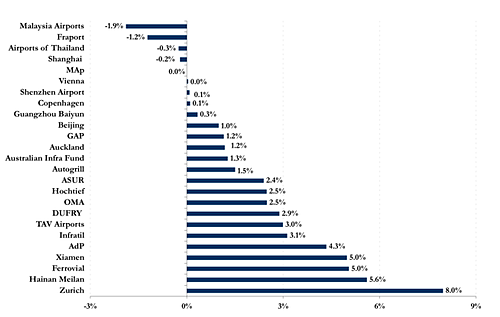