Shares in Cimber Sterling soared 8.9% on Friday as the carrier reported double-digit passenger growth in Jul-2010 – passenger numbers increasing 11% to 238,414 – and a “stabilisation” in yield declines.

However, load factors slipped 3 ppts to 76% and the carrier reported single-digit yield and RASK reductions in the preceding month of Jun-2010.  Specifically, yields decreased 7% (to EUR 7.5 cents), although the carrier added that a “stabilisation was seen relative to the performance in previous months, and the periods have become more readily comparable”.

Also in the Nordic LCC market, Norwegian Air Shuttle reported an 8% reduction in yield (to EUR 6.83 cents), while RASK decreased by double-digits (by 12% to EUR 5.82 cents).

The carrier added that approximately a third of the RASK reduction was related to the introduction of 11 B737-800 aircraft with with higher capacity and lower unit cost since Jul-2009.

Also in the month, the carrier reported a 26% increase in passenger numbers to 1.3 million, while load factors slipped 3 ppts to 85%. Shares in the carrier gained 1.4% on Friday

Another LCC reporting passenger traffic for the month of July on Friday was Vueling, which reported a 3.6% year-on-year increase in passenger numbers to 1.2 million. Like Norwegian and Cimber Sterling, Vueling’s load factors weakened in the month, slipping 3.6 ppts to 74.3%. Shares in the Spanish LCC closed 1.6% lower on Friday. 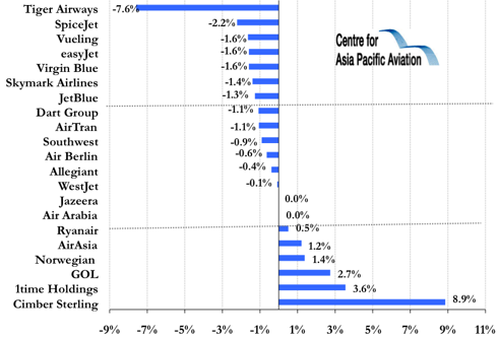