Beijing, Shanghai and Guangzhou airports may command a dominant share of China’s aviation market, but smaller listed airports, like Xiamen, Shenzhen and Haikou, are performing much better in the earnings growth stakes this year.

Xiamen Airport’s shares soared 7.2% yesterday as it reported a 41.6% operating margin in the first quarter of 2009. Operating profits rose 42.5%, as revenue surged 39% and the airport produced an impressive net margin of 31.2% - a figure airlines serving Xiamen could only dream of.

Shenzhen Airport’s operating margin was even better at 48.6%, although operating profits fell 6.5% as revenues rose only 0.4% year-on-year. Net profits eased 10% and the airport reported a (still impressive) net margin of 38.3% in the first quarter. Shenzhen Airport’s shares rose 1.7% yesterday.

Beijing Airport is yet to report its first quarter earnings, but this week reported a 90% slump in operating profit in 2008. It warned the revenue outlook was challenging as the CAAC has barred increases in aeronautical charges for the first half of 2009, to help the financially crippled airline sector. Beijing Airport’s shares surged 5.5% yesterday. 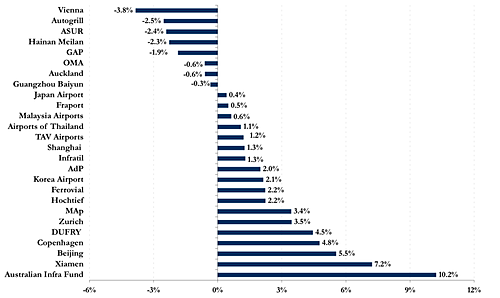