Japan Airlines’ shares slipped 0.9% on Friday, ahead of the release of the carrier’s financial results, in which the carrier reported its worst first half loss since its merger with Japan Air System in 2002. The carrier’s loss in the period was double the size of its previous prediction for its FY2010 results.

During 1HFY2010, JAL reported a USD1.1 billion operating loss and a USD15 billion net loss (compared to profits of USD337 million and USD409 million, respectively, in the previous corresponding period), as revenues slumped by 29%.

The carrier, which is currently seeking its fourth state bailout since 2001, added that it has applied for mediated debt restructuring on 13-Nov-2009, as it faces USD15 billion in debt, a large pension deficit and dozens of unprofitable routes.

Asiana return to net profitability, but losses at an operating level

In South Korea, Asiana’s share price was down by 1.3% on Friday, as the carrier reported a return to net profitability in the three months ended Sep-2009, with a net profit of USD607,000.

However, on an operating level, the carrier reported a loss of USD25 million, compared to a profit of USD50 million in the previous corresponding period. Also in the three-month period, passenger and cargo yields were both down by double digits, slipping 13.6% and 16.4%, respectively.

See related article: ANA and Korean in the black; JAL and Asiana negative

In other financial news, Philippine Airlines reported a 21% year-on-year revenue reduction in the three months ended Sep-2009 to USD7 million, with the carrier stating the revenues decline was “primarily brought about by lower net yield per revenue passenger kilometres as well as the reduction in passenger traffic”. The carrier reported a loss of USD2.2 million in the three-month period, an improvement from the USD3.4 million loss reported in the previous corresponding period.

Shares in China Eastern, Air China and China Southern, meanwhile, gained 11.2%, 5.1% and 4.6%, respectively, on 13-Nov-2009, after China’s three largest carriers were rated ‘buy’ by Citigroup, which was the most positive on China Eastern.

In the month, the carrier reported an 11% year-on-year increase in passenger traffic (RPKs), driven by double-digit domestic and regional growth (+15.1% and 19.0%, respectively), with load factors gaining 4.9 ppts to 81.6%.  Cargo volume was down by single digits in the month, slipping 8.1 ppts.

Cathay Pacific believes the worst is over, but long recovery ahead

Cathay Pacific CEO, Tony Tyler, meanwhile, stated he believes the worst of the global economic slump is over, with the CEO encouraging seeing a surge in cargo demand and “decent” yield.

However, Mr Tyler cautioned that the recovery would not be rapid, but would instead be a ''long, gruelling crawl.''  Cathay Pacific gained 1.4% on the day. 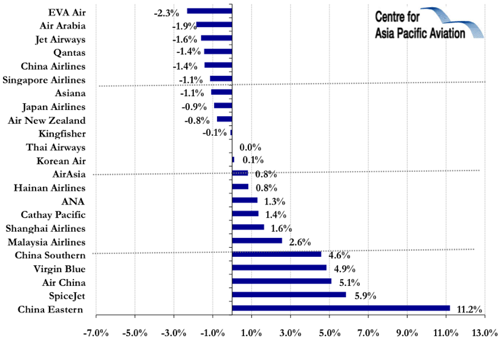