The company Brand Finance has released its inaugural report on the most valuable and strongest airport ‘brands’ with a list of the World’s 'Top 25'.

There are several definitions of the word 'brand', including: ‘a particular identity or image regarded as an asset.’ Of course, just about everything is a brand now, from washing powders to pop groups to sporting celebrities, and image is everything. Some people and entities are better known for their image than for what they actually do.

In the report the big city airports dominate at the expense of smaller ones with a strong case and, among the interesting assessments, the exclusion of Dubai and other Middle East airports is a mystery.

The criteria used to establish this list are comprehensive but, even so, may need benefit from a closer review.

The top 25 airport brands according to Brand Finance 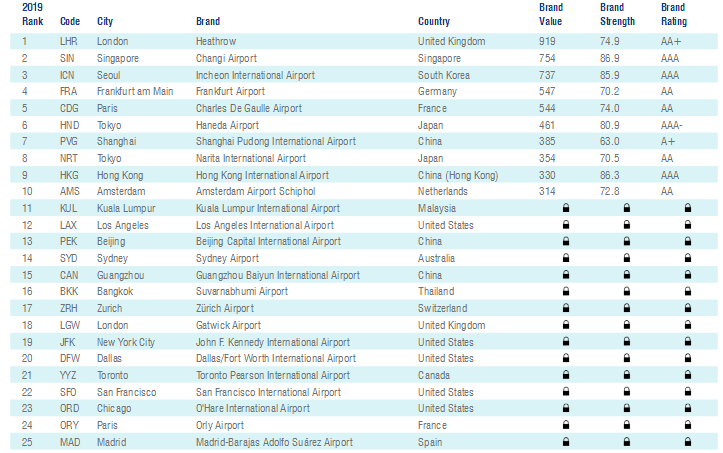 Brand Finance is a company concerned both with image and with corporate finance.

Its chief executive, qualified as a chartered accountant and previously with the management services company Price Waterhouse, set the company up after several years in the role of Director of Global Brand Evaluation at Interbrand, possibly the world’s leading company in the field of brand creation. As for the corporate finance element, the clue is in the name.

So it goes without saying that the airports that top this list are going to be globally known, with big revenues, and their identifying features are going to be publicly acknowledgable ones, such as their aesthetic appeal and range of shopping facilities.

Nevertheless, the report goes out of its way to say that it used “a variety of metrics such as service quality, customer reviews and ratings, airport capacity, number of destinations, investment and utilisation to measure the value and strength of airport brands around the world”.

The first two above, visual appeal and shopping, are the sorts of things that get them selected as ‘airport of the year’ in glossy business magazines, rather than for getting passengers speedily and efficiently on their way without undue stress.

Small and mid-sized airports just not in the running

The vast panoply of small and mid-sized airports need not apply. They have the brand equivalence of Fred’s Bank or Myspace.

So it is perhaps of no surprise that London Heathrow Airport was the highest rated airport brand financially, and ‘valued’ at USD919 million, although it's Brand Strength Index (BSI), is only the fifth highest.

This immediately raises a problem. Although an improved Heathrow, the world’s second busiest international airport, might have scored highly on intangibles such as service quality (reviews of which can vary from 1 to 10 for the same service, depending on the reviewer), and indeed on investment (though that wasn’t always the case) – the question is how it could do so on capacity, when its runways are 98% full most of the time and likely to stay that way for another 10 years.

Equally unsurprising is that Paris Charles de Gaulle Airport comes in at #5, valued at USD544 million. Paris is a stylish global city; like London and its main airport, it reflects those values.

Orly Airport, however, doesn’t do so to the same degree, and comes in at #24 with a valuation of only USD152 million. Just as London Gatwick only makes #18.

Singapore’s Changi Airport was the strongest and second most valuable airport brand, with a BSI score of 86.90 out of 100, the highest of the top 10, and a value of USD754 million.

That is not that far off Heathrow’s value rating, despite the fact that Changi handles 15 million passengers less than Heathrow. But Singapore’s capacity provision is strong, with three full-length runways, a recently opened terminal, and another already planned to handle 50 million ppa.

It is to be wondered, though, to what extent Singapore’s massive shopping and dining experience, green oases and butterfly gardens, and its propensity to win awards such as Skytrax, had to do with its rating.

Again, capacity rears its head in the case of Hong Kong, where a third runway is needed but was fought hard against by environmentalists, and Beijing, where a second airport is scheduled to open shortly.

Are these token gestures? Some of these airports are capacity-constrained, and in the words of many eminent people – even of “Third World” standard.

But that may be a little unfair to some of them, at least, where considerable investment has been, or is being, made.

On the other hand, while passenger services (FBO, retail etc.) have improved considerably, along with aestheticism in terminal design, there is still an aura of municipal functionality at U.S. airports compared to their European and Asian peers.

Again, it is worth pondering whether these big city airports were included simply because they were located in big cities. Where, for example, is Orlando International, one of the most sustainably pleasing on the eye to be found anywhere?

Sustainability could be one criterion, but is not

For example, in Europe, Oslo Gardermoen is a world-class example of how to connect a brand new terminal seamlessly into an old one, and sustainably, in what is one of the world’s leading countries for insisting that impact on the environment figures in every aspect of aviation.

Or, on a similar theme, India’s Cochin Airport, which was the first to be self-sustaining in its own power provision, using solar panels. Should sustainability not be part of the ‘brand assessment’ criteria?

Other criteria could equally apply to those airports that have set themselves apart by offering alternative services to passengers – such as Austin Airport’s free music shows, which are part of the city of Austin’s strategy of establishing itself as the leading live music showcase in the world.

Dubai is missing, and so is the rest of the Middle East

One airport that is missing from the Top 25 list that stands out like a sore thumb is Dubai International.

The world’s third busiest, and the busiest international, airport is conspicuous by its absence. This despite Dubai's representing a major global finance, trade and tourist destination, and the airport being a modern facility with many destinations, solid investment, generally favourable reviews and (except when one of its runways is closed) adequate capacity.

The question is how it could be any less brand-iconic than Bangkok Suvarnabhumi or Toronto Pearson airports. In fact, similarly to Dubai, there are no Middle East airports in the list at all.

Does that part of the world simply lack brand awareness?