IATA's recent revision to its airline industry financial forecast grabbed headlines for downgrading the profit outlook for 2014. However, as IATA pointed out, "we continue to expect a significant improvement in airline profits this year compared to 2013". Moreover, Jan-2014 data show that premium traffic is on a rising trend. It does seem that the global economic cycle is turning upwards and CAPA's Capacity Index supports the view that the sector is in a cyclical upswing.

However, the industry is forecast to generate a net profit in 2014 of only USD5.65 per departing passenger. With a record order backlog and annual deliveries of USD125 billion or more to fund over the next decade alone, this throws out a challenge to the world's aviation financiers.

Lessors, banks, ECAs, capital markets and newer sources of finance will all continue to play their part in meeting this challenge. Representatives of all these sources of aircraft finance, plus aircraft operators and manufacturers, will discuss these themes at CAPA Airline Fleet and Finance Summit Asia 2014 in Singapore from 25-Mar-2014 to 26-Mar-2014.

As results come in, IATA has made a small downwards revision to its operating profit estimate for 2013, with operating margin estimated to be 3.0% (from 3.3% previously) although its 2013 net profit figure remains unchanged at USD12.9 billion, representing a net margin of 1.8%.

Its 2013 revenue estimate is broadly unchanged, although it arrives at it with slightly higher cargo revenues and slightly lower non-traffic revenues compared with its previous forecast in Dec-2013. The 2013 estimate of costs is slightly higher, due to modestly increased forecast non-fuel costs. The 2013 changes are relatively small and most likely reflect an increase in the proportion of airlines that have actually reported results.

The greater interest lies in IATA's revisions to its 2014 forecasts and how they compare with the 2013 numbers.

On the revenue side, IATA sees 2014 passenger traffic growth slightly lower at 5.8%, versus 6.0% previously, reflecting some weakening of the growth outlook in emerging markets. Nevertheless, this remains a healthy level of growth (it is close to long term average rates) and it is an increase on the 5.3% figure for 2013.

IATA now forecasts 2014 passenger load factor at 80.2%, 1.1ppts below its previous forecast, but 0.6ppts above its 2013 level. If achieved, this would be a record passenger load factor for the global industry. In spite of lower traffic growth, IATA's passenger revenue forecast for 2014 is almost unchanged (it is 0.3% above the Dec-2013 forecast) as it sees passenger yield a little higher than previously.

IATA is more optimistic for air cargo than previously, due to a higher world GDP growth forecast and rising business confidence.

In Jan-2014, global freight tonne-kms had recovered to the previous peak of early 2010. IATA has increased its cargo traffic growth forecast for 2014 from 2.1% to 4.0%, although it says that cargo growth could be closer to 8% "without the current degree of on-shoring and non-tariff protectionist measures".

*Forecast as of Mar-2014
Source: CAPA – Centre for Aviation, IATA

North America to remain the most profitable region, followed by Middle East

By region, IATA still forecasts the highest 2014 EBIT margin in North America, at 6.4% (up 0.1ppts from its Dec-2013 forecast), compared with 5.2% in 2013. Reported figures for North America in 2013 have turned out a little better than forecast and it is benefiting from what IATA calls "structural improvements" (ie consolidation).

Asia Pacific's 2014 margin is forecast at 3.4%, which is 1.0ppts below the previous forecast. Europe is still forecast to be the laggard among the major traffic regions, with a 2014 EBIT margin of 1.9% (down 0.1ppts from the Dec-2013 forecast), reflecting its struggle to shrug off the effects of the eurozone crisis and structural problems in the European airline sector.

The only region, apart from North America, to see an increse in its 2014 EBIT margin forecast is Africa, although, at 0.8% (up 0.1ppts), it is still expected to be the world's least profitable region. 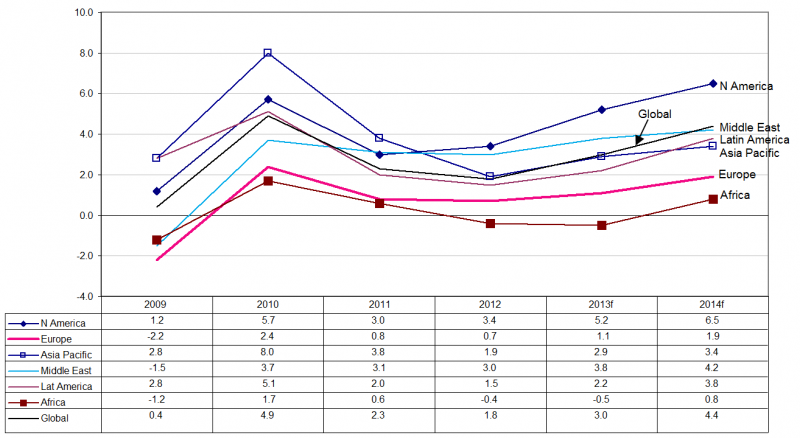 Interestingly, the two regions that are forecast by IATA to have the highest EBIT margins in 2014 have very different traffic growth forecasts. North America, the most profitable region, is forecast to have the slowest growth in passenger traffic (RPKs) in 2014, at 2.7%. It is also forecast to have the slowest growth in capacity (ASKs) and this continued capacity restraint, underpinned by consolidation, has been the key to its superior margins in recent years.

By contrast, the Middle East (forecast to be the second most profitable region) will see the highest rate of passenger traffic growth in 2014, at 13.0% matching its ASK growth. The rising margins of the Middle East has been led by the high growth Gulf carriers, who have developed an efficient long-haul connecting strategy to gain market share profitably.

Africa and Latin America are the only two regions where IATA forecasts RPK growth will be lower than ASK growth in 2014. It sees both regions achieving traffic growth at or above the global average rate of 5.8%, but lower than the rates of around 8% that it expected previously. This weakening of its demand forecast for Africa and Latin America reflects a weakening of the economic growth outlook in emerging markets.

IATA forecast of ASK growth and RPK growth by region 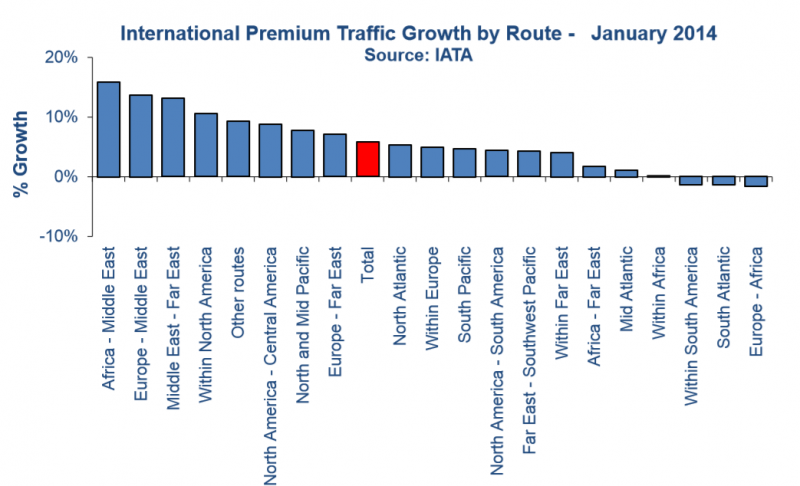 Globally, premium traffic is on a rising trend

More broadly, growth in global premium traffic in Jan-2014 was 6.1%, which compares favourably with a rate of 4.2% for the whole of 2013. These growth rates can be volatile and one month does not make a trend, but premium traffic growth outpaced economy cabin growth for seven of the eight months reported since Jun-2013, reversing the trend that had prevailed since 2H2011.

This means that premium traffic has once more been increasing its share of the total, although it has not yet reached its early 2011 levels.

Premium traffic will likely never recover its pre financial crisis levels of 2007, but the current upward trend augurs well for the profitability of the network carriers for whom long-haul premium traffic is such an important contributor to profits. 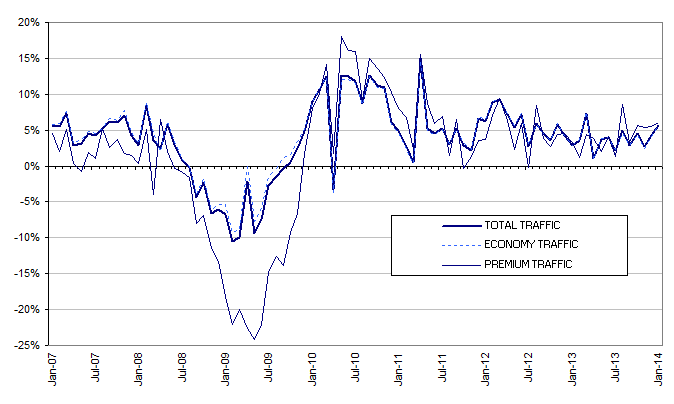 Premium passengers as percentage of the total (seasonally adjusted) 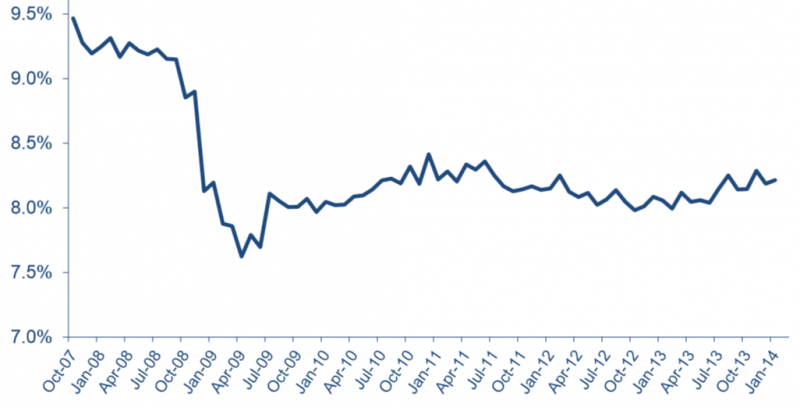 In spite of the downgrade to IATA's 2014 industry profit forecasts, all the signs are that the world airline industry is now above mid-cycle in terms of profitability and that both traffic growth and margins are continuing to improve year on year.

In addition, CAPA's Capacity Index, which has historically shown a close relationship with airline operating margins of the world airline industry, is also above its mid-cycle point and should rise further in 2014. Moreover, as we have suggested before, the industry appears to be achieving a higher margin than in the past from a given level of the Capacity Index, giving some hint that it may be moving towards margins that are structurally superior to levels achieved in the past.

For more on our Capacity Index, including a description of how it is derived, see the related reports: 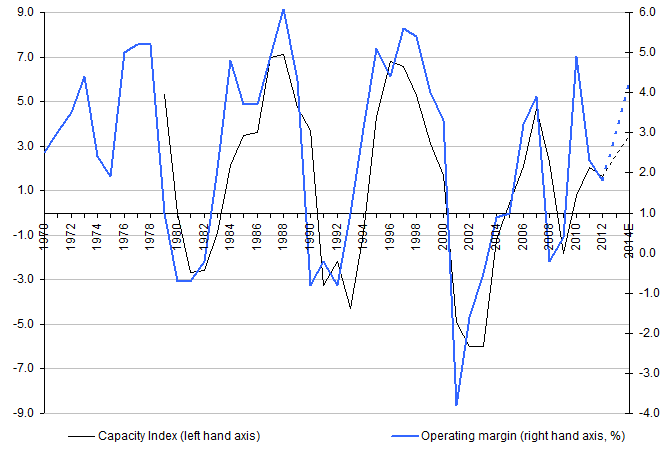 However, the industry remains one that, in aggregate, does not cover its cost of capital as defined by market benchmark rates of return. IATA estimates that the return on invested capital for the world's airlines will rise from 4.5% in 2013 to 5.4% in 2014, well short of its weighted average cost of capital (WACC) in the region of 7% to 8%.

But below WACC means a need for external financing of aircraft deliveries?

Expressing the industry's weak financial returns in a simpler way, IATA forecasts that its net profits in 2014 will be equivalent to USD5.65 per departing passenger, up from USD4.13 in 2013.

This is barely enough to buy a cheese sandwich from an airport retail outlet (albeit more than the price of a coffee), let alone to provide funds for the industry to reinvest in fleet replacement and expansion.

See related report: Record airline fleet order backlog has winners & losers - and questions about how it will be funded 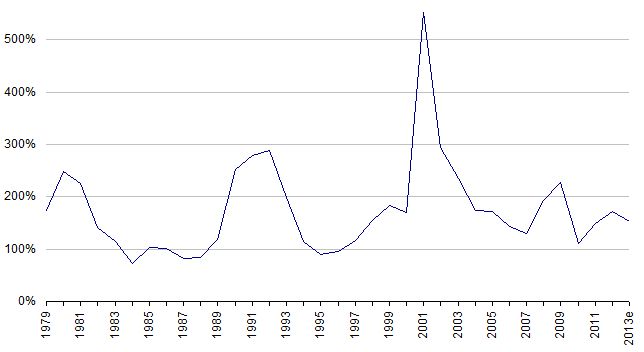 Paradoxically perhaps, although aircraft operators typically do not generate strong returns on invested capital, investment in the aircraft as an asset class has generally been more financially rewarding.

This has ensured that a range of investors and financing methods has been available to meet the industry's external financing needs.

There is a range of delivery financing sources

Aircraft delivery financing is likely to be comfortably over USD100 billion in 2014, but cash is only able to cover about 10% of the industry's financing needs. Lessors are the most important source of delivery finance, accounting for around 35%, followed by banks on 29% and export credit agencies on 19%. 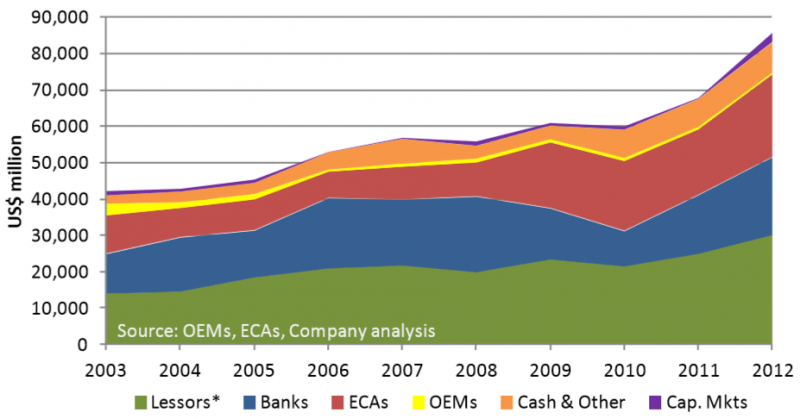 With a record order backlog in place, the funding challenge will remain massive; there will be an annual financing requirement annual total of at least USD125 billion over much of the next decade. The existing sources of financing will continue to compete to fund this need, but a number of forces will have an impact on changing the mix.

Banks are adapting to regulatory changes regarding capital requirements; the export credit agencies are adapting to changed regulations that have had the effect of making ECA support more expensive and more burdened by regulation; capital markets products such as EETCs, securitisation and bonds are finding growing acceptance in regions of the world outside their North American heartland; and newer sources of aircraft financing, such as private equity, hedge funds and fixed income funds are taking a more active role.

In addition, banks and capital markets are also indirect sources, via the medium of lessors, who themselves use a combination of their own funds and those raised through these external channels. Finally, the shifting balance of power in the global aviation sector towards the Middle East and the Asia Pacific region means that regional financial institutions and investors are playing an increasingly important part in aviation finance.

All of these factors will lead to changes in the mix of delivery financing.

The themes of this report will be examined further at the CAPA Airline Fleet and Finance Summit Asia 2014, which will take place in Singapore from 25-Mar-2014 to 26-Mar-2014.