Wizz Air has unveiled plans for significant expansion in Bosnia and Herzegovina, an under-served market that has traditionally fallen outside the spotlight of low-cost carriers. The Bosnian market has not had much attention in recent years but is poised to see a sudden surge of capacity as Wizz Air plans to connect the country with several new destinations including Malmö, Basel Mulhouse and Gothenburg.

The expansion from Wizz Air would provide Tuzla, the third largest city in Bosnia and Herzegovina, with scheduled commercial service. LCC expansion may also follow for the country’s other airports including in Sarajevo and Mostar.

LCCs currently account for less than 20% of seat capacity to and from the southeastern European country. But the recent launch of services by Turkish LCC Pegasus has already doubled LCC capacity in the market. Wizz Air’s entry will push the LCC penetration rate up further, approaching 30%, with more increases possible in 2014 as Wizz and other European LCCs ponder further expansion in Bosnia and Herzegovina.

Wizz Air to give Tuzla first set of commercial services

In Apr-2013 Wizz Air announced plans to launch service to Bosnia and Herzegovina’s Tuzla Airport from Malmö (Sweden), Basel Mulhouse (Switzerland) and Gothenburg (Sweden). The airline said it expects the three routes to increase LCC seat capacity in the country to over 100,000 seats p/a, with it expecting to carry 60,000 passengers on the routes from Malmö and Basel Mulhouse in their first year of operation alone. The airline did not state how many passengers it expected to carry on the Tuzla-Gothenburg service.

Tuzla Airport, located in the country’s northeast, originally only served military aircraft but after complete military withdrawal in 2006 the airport implemented ICAO technical requirements and standards to support civilian operations. The airport currently only receives seasonal charter services.  Charter carriers expected to serve Tuzla in summer 2013 include Egypt’s AlMasria with service to Cairo and Turkey’s Sky Airlines with service to Antalya.

Sarajevo accounts for 96% of Bosnia and Herzegovina’s  scheduled capacity

There are approximately 21,000 weekly international seats offered in the Bosnia and Herzegovina market, according to CAPA and Innovata data. Around 96% are handled by the country’s capital airport, Sarajevo Butmir International Airport.

The LCCs currently serving Sarajevo include Germany’s Germanwings, Norway’s Norwegian Air Shuttle and Turkey’s Pegasus Airlines. LCCs currently account for around 18% of the country’s international capacity, according to CAPA and Innovata data.

Eastern and Central Europe is the country’s main market with the region accounting for approximately 59% of international seats, with the remaining 41% being to Western Europe. 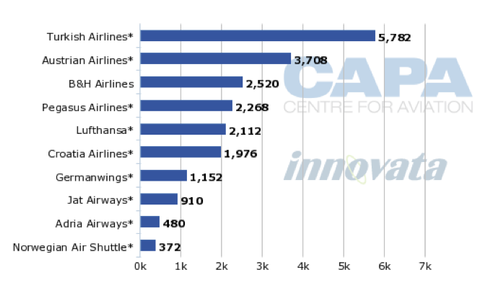 In late Nov-2012 Sarajevo Airport reportedly cancelled its EUR32 million expansion project, which would have seen its terminal enlarged, a new apron constructed and the overhaul of its existing runways. The airport had already secured a EUR25 million loan from the European Bank for Reconstruction and Development (EBRD) for the project.

B&H Airlines operates one ATR 72-200 turboprop, which is currently undergoing scheduled maintenance. To cover its only aircraft while in maintenance, the airline is wet leasing an ATR 72-200 aircraft from Helitt Líneas Aéreas.

The flag carrier is currently offering international services from Sarajevo to Istanbul Ataturk, Zurich and Copenhagen and from Banja Luka to Zurich. In addition, the airline operates domestic Sarajevo-Banja Luka service. B&H Airlines is the third largest carrier overall in Bosnia and Herzegovina, following Turkish Airlines and Austrian Airlines, accounting for about 12% of the country’s total capacity.

As with other flag carriers of Eastern nations, B&H Airlines has been struggling to continue operating and has been attempting to find a strategic partner. Turkey’s Tarhan & Tower Airlines and Atlasjet have been among several carriers which have reportedly expressed interest in investing in the carrier. Atlasjet reportedly has been looking to create a new regional carrier in the Balkan region which would operate from bases at Pristina, Sarajevo, Skopje and Tirana.

In early Mar-2013 B&H Airlines’ operations were temporarily suspended after its bank accounts were frozen by the Bosnian arm of Austria's Hypo Alpe Adria Bank due to an unpaid BAM5.5 million (EUR2.8 million) loan for the lease of two ATR 72 aircraft and a BAM1.5 million (EUR767,000) rehabilitation loan. B&H Airlines negotiated a settlement with the bank which included an additional payment by the Bosnia and Herzegovina Government.

The airline resumed operations on 13-Mar-2013 after its accounts were unfrozen. In early Apr-2013 the airline rebuffed reports that the government was considering shutting it down due to its large debts and said it planned to launch a new service to Skopje. The airline is also reportedly looking to launch a service to Amsterdam in summer 2013.

In 2008 Turkish Airlines (currently the largest operator to Bosnia and Herzegovina) acquired a 49% stake in B&H Airlines and had managerial staff working for the airline under a joint venture arrangement. This venture ended in early 2012 after the Bosnian and Herzegovinian Government stated it could not invest any more funds in the carrier, connected to a dispute between the government and Turkish Airlines over the management of B&H Airlines

In mid-2012 Turkish Airlines withdrew its staff and an A319 aircraft from B&H Airlines. The government took over the Turkish carrier’s stake and cooperation between the airlines ended. This left B&H Airlines with two ATR 72-500 aircraft and resulted in services to Amsterdam being suspended and frequency reductions on the airline’s other routes.

Other potential new routes to Bosnia and Herzegovina coming up

Bosnia and Herzegovina may see more new routes launched to the country in the coming months with talks between the Bosnian and Herzegovinian Government and Moskovia Airlines taking place in Apr-2013. The discussions centred around the potential launch of Moscow Domodedovo-Sarajevo service as well as potential connections to Banja Luka and Mostar.

Meanwhile Croatia Airlines, Turkish Airlines, Pegasus Airlines and Norwegian Air Shuttle have confirmed plans to expand at Sarajevo. Three new routes are being launched (from Istanbul Sabiha Gökçen, Copenhagen and Oslo to Sarajevo) and frequencies are being increased on two existing routes. Norwegian Air Shuttle will increase its network to three routes to the country (in addition to its existing Stockholm Arlanda-Sarajevo service).

The 27-Apr-2013 launch of Pegasus service to Sarajevo, the forthcoming launch of Wizz Air services to Tuzla and the two new forthcoming Norwegian Air Shuttle routes significantly expands the LCC penetration rate in the market. In Jul-2013, LCCs will account for almost 30% of total scheduled capacity in Bosnia and Herzegovina, up from about 18% currently and about 10% prior to the recent launch of service from Pegasus.

The market could see a further increase in LCC activity if Mostar Airport succeeds at securing service from a low-cost carrier. Mostar, the country’s fifth largest city, currently does not have any scheduled services.

In Nov-2012 Mostar Airport said it was in negotiations with Wizz Air to commence services from Dortmund and Malmö, and with Ryanair to launch services from Brussels Charleroi, Frankfurt Hahn and Oslo Moss. If Ryanair launches services to Mostar, that would mark the carrier’s first to Bosnia and Herzegovina. Mostar Airport’s only current services are provided by Italy’s Mistral Air, which operates charter services to Bari, Bologna, Napoli and Trieste in Italy.

Wizz Air has shown it can develop substantial network operations from countries in the Eastern European region. This has been seen in cities such as Skopje (Macedonia), to where it launched services in Jun-2011 and is now operating 10 routes.

Wizz Air, which will become the largest LCC in Bosnia and Herzegovina once it launches its initial tranche of three routes at Tuzla, stated it was looking forward to further investing in developing air services to the country. This could result in further expansion at Tuzla Airport but also the launch of services at Mostar and potentially Sarajevo and Banja Luka.

For a small market such as Bosnia and Herzegovina, the launch of services by Wizz Air and Pegasus represent a major shot in the arm to the country’s air services development programme and overall economy. If the new services succeed they will be followed by more LCC capacity, filling some of the gap left by the country’s ailing flag carrier while driving growth as its low fares stimulate new demand.