However, behind the headlines, Wizz Air cannot sit back and relax. Firstly, after years in which unit revenue was driven by strong ancillaries compensating for weak ticket pricing, total RASK fell in FY2016. Ancillaries remained strong, but not strong enough to offset falling fares. The RASK outlook remains weak. Secondly, unit cost only fell because of lower fuel prices. Ex fuel CASK has barely moved for six years and is already the second lowest in Europe. It is difficult to cut non-fuel costs further (although containing them, as Wizz Air has done, is a creditable achievement).

Of course, well-managed companies do not sit back and relax. Wizz Air's is building its future on the A321, whose greater seat count will give lower unit costs versus the A320s. Wizz Air judges that this unit cost benefit will compensate for the larger aircraft's dilutive impact on yield.

In FY2016 (year to Mar-2016), Wizz Air's reported net profit grew by 5% to EUR193 million. However, this comparison is distorted by items such as unrealised foreign exchange gains, the value-hedging instruments and other exceptional items. Its underlying net profit, which is the basis for management's guidance, increased by 53% to EUR224 million. This was above its guidance range of EUR200 million to EUR210 million.

Revenue grew by 16% to EUR1,429 million and operating profit (before exceptional items) was up by 38% to EUR236 million. The operating margin gained 2.6ppts to 16.5%. This confirmed its position as Europe's second most profitable airline by operating margin in 2015 (or nearest financial year), behind Ryanair's margin of 22.3%.

As with Ryanair, Wizz Air managed the rare achievement of reporting a positive operating result in each quarter of its financial year. This included 4Q, when it made a small operating profit of EUR1 million – versus a loss of EUR6 million a year earlier. Nevertheless, Wizz Air remains strongly dependent on its 2Q result, which accounted for 76% of its operating profit and 77% of its underlying net profit in FY2016.

Wizz Air's most profitable year ever

Wizz Air has maintained strong growth over many years, albeit that its FY2016 revenue growth of 16% was a little slower than its five-year compound average growth rate of 19% pa. From FY2011 to FY2016 its revenue more than doubled (up 2.4 times), and its operating profit increased by 41 times.

Wizz Air's FY2016 operating margin was its best ever, as were the absolute level of its operating profit and its net profit. 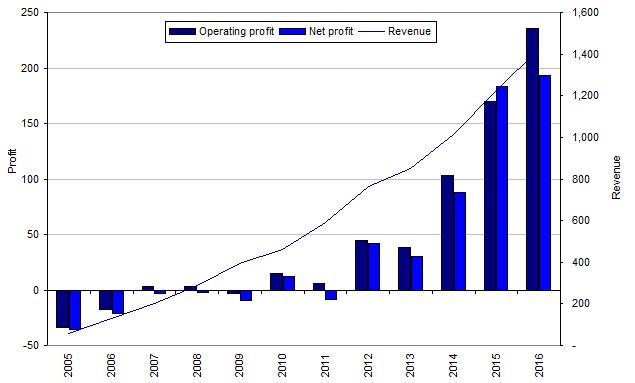 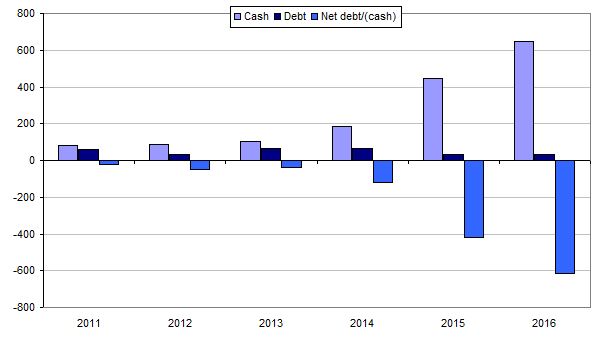 Wizz increased its seat capacity by 19% in FY2016, while passenger numbers grew by 21% to touch 20 million for the first time and passenger load factor gained 1.5 ppts to 88.2%. ASKs also grew by 19%, since average trip length remained stable. Wizz Air's load factor has increased by 2.7ppts over two years and by 4.9ppts over six years.

Although load factor is above the global industry average of around 80%, it is below that of leading European LCCs – such as Ryanair and easyJet. In the 12-month period to Mar-2016 Ryanair's load factor was 92.9% and easyJet's was 91.5%. 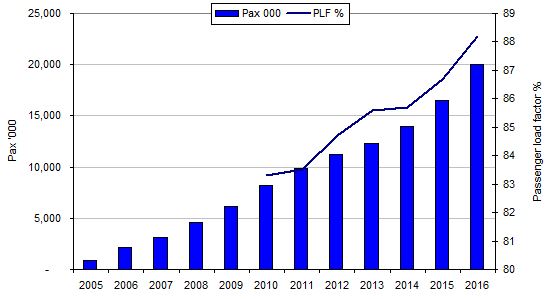 Existing routes accounted for 65% of capacity growth in FY2016

Wizz Air continues its rapid capacity growth, but only a small part of this involves new markets since it concentrates on adding capacity at airports where it already has a presence.

According to Wizz Air its aggregate market share in Central/Eastern Europe grew from 39% in FY2015 to 43% in FY2016. Ryanair was its closest rival in this geographical segment, with a share of 33%. Nevertheless, Ryanair is far bigger than Wizz Air across all of Europe and is increasing its presence in Central/Eastern Europe, with new bases announced at Bucharest, Prague, Sofia, Timisoara and Vilnius for winter 2016/2017.

Revenue increased by 16% – less than the growth in ASKs. Passenger ticket revenue grew by 13%, while ancillary revenue again outperformed, with a 23% increase. Ticket revenue per passenger fell by 7% to EUR44.8, reflecting the soft pricing environment experienced by many European airlines.

However, ancillary revenue per passenger increased by 1.7% to EUR26.7, the highest among European airlines and one of the highest anywhere in the world.

Wizz Air's average ticket price of EUR44.8 compares with EUR46.7 for Ryanair in FY2016; this is the first time that Wizz Air has been lower than Ryanair on this measure. Noted that Ryanair's figure also includes fees for checked baggage, so the two are not directly comparable.

Moreover, Wizz Air's total revenue per passenger of EUR71.5 continued to be higher than Ryanair's EUR61.4 (although this is broadly consistent with its longer average sector length). 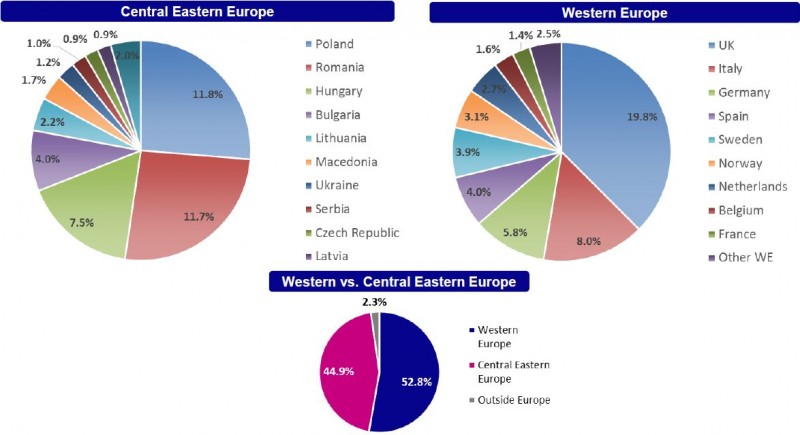 Total operating costs increased by 13%, less than the growth in ASKs and revenue. Fuel remained the biggest cost item, but its share of the total fell from 38% to 34% and the fuel bill grew by only 1%. Ex fuel costs grew by 20%, just ahead of ASK growth.

Wizz Air's CASK fell below the estimated level of Ryanair's

Previous CAPA analysis has suggested that Wizz Air's CASK could fall below that of Ryanair, although the comparison is a little nebulous given Wizz Air's longer average trip length (which should give it a lower CASK, all other things being equal).

Since Ryanair only reports its ASKs once a year in its annual report (usually published in the autumn after the March year end) and did not include such data in its FY2016 results announcement, it is not possible to calculate its CASK for the same period. However, it is possible to estimate Ryanair's ASKs from published data on passenger numbers and load factor and an assumption that average trip length remained the same as in FY2015. From this and its reported costs, a provisional CASK estimate can be derived.

On this basis, it can be estimated that Wizz Air's CASK of EUR3.43 was 3% lower than Ryanair's, although its ex fuel CASK of EUR2.27 was 8% higher. These figures cannot be verified until Ryanair publishes its full annual report and their significance is limited by the differences in average trip lengths. Nevertheless, they underline Wizz Air's credentials as one of Europe's true ultra-LCCs.

A321 to drive fleet expansion

The fleet plan involves two factors aimed at lowering unit costs: first, an increase in the average aircraft size and, second, an increase in the number of aircraft with winglets (which help to reduce fuel burn). The average number of seats per aircraft will grow by 27%, from 180 in FY2015 to around 228 in FY2024, and the proportion of winglet-equipped aircraft increases from 36% to 100% over the same period.

The Wizz Air CEO, Josef Varadi, told analysts on a conference call to discuss the FY2016 results that the A321 was "a great aircraft". He added that routes deploying the A321 were achieving the same load factors as the A320 routes.

With 28% more seats than the A320 (320 versus 180), the larger aircraft offers a double-digit unit cost advantage, while Mr Varadi said that the yield decline in the A321 was only mid-single-digit. "It is a very competitive tool," he said.

The fleet has doubled the number of aircraft since FY2010. 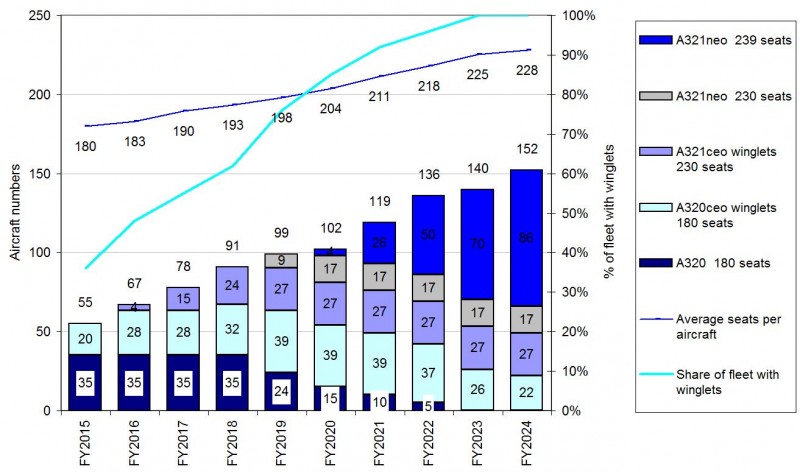 In FY2017 Wizz Air plans ASK growth of 17%, with a "modest" increase in both average stage length and load factor. Its plans include more than 60 new routes and three new bases: Sibiu and Iasi in Romania, and Kutasi in Georgia.

It expects a further 15% fall in fuel CASK, broadly flat ex fuel CASK, and a 5% fall in total CASK (as in FY2015). Unit revenue is expected to remain weak, with RASK down at a mid-single-digit percentage rate. Its guidance for underlying net profit is EUR245 million to EUR255 million – a year-on-year increase of 12% at the midpoint.

As with Ryanair, this is still a healthy earnings growth rate but much slower than in the past two years (67% in FY2015 and 53% in FY2016 for Wizz Air). It also implies, if the mid-single-digit RASK decline matches the 5% CASK decline, that there will be no further increase in operating margin.

Wizz Air has a very solid track record of controlling its ex fuel CASK, which has remained virtually unchanged since FY2010. In that time changing fuel prices first pushed CASK up (from FY2010 to FY2013), and then down (from FY2013 to FY2016, when total CASK fell by 12%).

For much of the period since FY2010 Wizz Air has managed to grow RASK, mainly thanks to the contribution of ancillary revenue to RASK (particularly from FY2012, since when the ticket RASK has fallen by 11%).

However, in FY2016 total RASK fell by 2.2% as ticket RASK declined by 5.3%, and this was only partly offset by a 3.5% increase in ancillary RASK. The softness in ticket pricing partly reflects lower fuel prices, which stimulated higher capacity growth in the market overall. In spite of the RASK weakness, Wizz Air was able to expand its operating margin thanks to CASK falling by 5.2% – faster than the fall in RASK.

According to CAPA calculations, the lower fuel CASK relative to the previous year saved EUR71 million in fuel costs, while the fall in ticket RASK lowered revenue by EUR50 million. Thus, Wizz Air was able to retain 30% of the benefit of lower fuel prices.

The increase in ancillary RASK and control over ex fuel CASK were crucial to its margin growth.

Unit cost benefit from A321 must more than offset yield dilution

As CAPA has observed previously, reductions in ex fuel CASK are now difficult to achieve. Moreover, Wizz Air already leads Europe on ancillary revenue and it may become harder to grow this income stream significantly from where it is. Further RASK increases are also difficult to achieve, as demonstrated by the FY2016 results and Wizz Air's FY2017 guidance.

In this context, its decision to increase the average number of seats per aircraft by bringing A321s into the fleet can be well understood.

It will be carefully targeting on which routes to deploy the A321 so that the unit cost reduction more than offsets the yield dilution coming from the larger aircraft. This balance worked in its favour in FY2016.

However, if FY2016 is not to become the high water mark for Wizz Air's margins, it will need to keep achieving in the same way over the next decade or so.