Wizz Air opened its 14th base in Vilnius, Lithuania, on 16-Apr-2011. Wizz Air’s expansion comes as Ryanair also expands in the Lithuanian market, with six new routes to be launched to/from Vilnius in May-2011. The entry of two of Europe’s largest LCCs has resulted in airBaltic downsizing its presence at Vilnius “due to crowding” in the market. Vilnius remains the second-busiest airport in the Baltic region, behind Riga International Airport.

The carrier has appointed Baltic Ground Services to provide ground handling at the airport.  The carrier announced its intention to launch a base in Vilnius on 29-Oct-2010.

Ryanair to enter Vilnius market in May-2011 with six routes

When Wizz Air announced its Vilnius expansion plans in Oct-2010, Ryanair only operated at Kaunus. Since then, the carrier has announced its intention to launch services from the Lithuanian capital from 02-May-2011. Ryanair will operate six services from Vilnius to Barcelona, Dublin, London, Milan, Rome and Bremen from May-2011. Wizz Air and Ryanair will compete directly on one route and indirectly on four others.

Announcing the launch of Bremen-Vilnius service, Ryanair Sales and Marketing Executive for Katarzyna Gaborec stated the LCC was “”delighted to announce our sixth route to/from Lithuania’s capital city, Vilnius to Bremen from May 2011. Lithuanian consumers/visitors can now beat the recession and escape airBaltic’s high fares by choosing Ryanair’s lowest fares (and our no fuel surcharge guarantee) from Kaunas and Vilnius to existing destinations all over Europe including Germany, Italy and Spain."

Vilnius expects half a million pax over summer

Vilnius Airport, upon the launch of the 2011 summer schedule, stated it expects to attract "around half a million" passengers to Vilnius in summer. During the season, 15 airlines will operate scheduled services to 25 destinations from Vilnius Airport. The greatest news is the arrival of two LCCs, Wizz Air and Ryanair," the airport said. LCCs now have a 23% capacity share of the Vilnius Airport market. 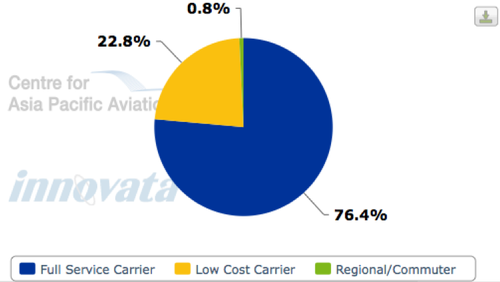 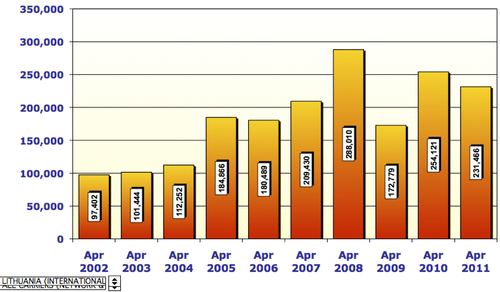 LCCs first entered commenced international services to/from Lithuania six years ago, with a 319% increase in capacity between Apr-2006 and Apr-2011, based on OAG Facts data. 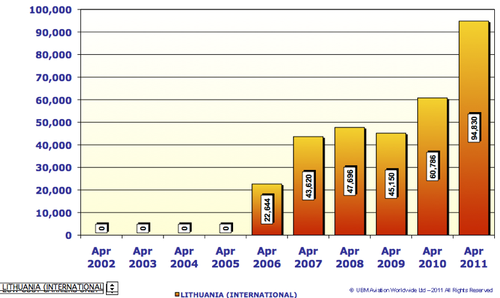 Estonian Air has also expanded its summer network to/from Vilnius with increased services to Tallinn, Amsterdam, Stockholm Arlanda and Berlin Tegel from 01-May-2011. The carrier has also launched service to Milan Malpensa in Dec-2010 with services also to Tallinn.

Estonian Air last year stated it planned to expand its base at Vilnius International Airport as it "sees growth possibilities" there. CEO Andrus Aljas described the Lithuanian aviation market as "one of the most rapidly growing aviation markets in the Baltic region", where only 0.53 flights per capita are taken annually, compared with 1.04 in Estonia and 1.94 in Latvia.

"A demand in direct and connecting flights from Vilnius is obvious. People that are going by our planes to Amsterdam continue their trips to Chicago, New York, Boston, Detroit, Atlanta, Minneapolis from there. These are popular destinations." Mr Aljas said. 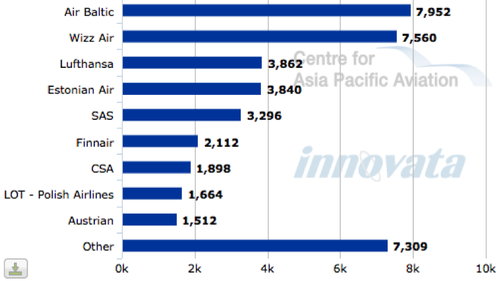 “We are pleased to see such a positive development of our business on our Vilnius flights. A very good occupancy and increased capacity will lead us to a passenger record this year. We are confident to transport over 100,000 passengers this year. This confirms our approach to the Lithuanian market and our attractive products and services,” Lufthansa Country Manager Baltic States, Matthias Hinze, said.

One consequence of the increased low-cost offering at the airport has been that airBaltic decided to downscale its Vilnius operations.

The carrier suspended four routes from Vilnius to Dublin, London, Rome and Paris for summer commencing 27-Mar-2011 citing increased competition and overcapacity on the routes. The carrier stated the new market entrants, notably Wizz Air and Ryanair, have “created identical products, resulting in overlapping of routes and overcapacity”.

“Coincidentally, both Ryanair and Wizzair have announced new routes in Vilnius that overlap with those served by airBaltic. The world is big enough, and we rather walk away from the crowd, to avoid the other two airlines flying wing-to-wing with each other," airBaltic’s General Manager for Lithuania Tadas Vizgirda said at the end of Feb-2011.

She continued to say that the new Vilnius Airport discount scheme “appears to have backfired, resulting in overcapacity on just a handful of routes rather than broadening the choice of routes, as intended by the scheme”.