Ambitious plans by upstart People Express for a late summer launch appear to be fading as the airline is still awaiting requisite US government approvals to inaugurate flights from Newport News-Williamsburg International Airport. The delay comes despite the carrier's management having extensive airline experience, which should lead to understanding the intricacies and complexities of gaining certification in order to start business. People Express’s vice-chairman William Stockbridge was involved in the launch of the original carrier and served as CEO of defunct trans-Atlantic business carrier Maxjet. The missed launch date means People Express will likely debut after the high season for travel in the US, creating an immediate challenge as its operations get underway during a period of weaker demand with a business model that has a long path to tread in order to gain credibility and achieve profitability.

The latest version of People Express made its official marketing splash in Feb-2012 after starting its pre-launch business period with USD5 million in capital, which the airline felt was adequate to cover expenses associated with that phase of its business. At the time it unveiled its plans, the carrier stated its goal was to inaugurate flights during the late summer of 2012.

The original People Express operated in the 1980s as one of the pioneers of the low-cost, no frills business model. It merged with Texas Air subsidiary Continental Airlines in 1987 after building up high debt through mergers and rapid growth.

Now the carrier is being resurrected. In its application with the US Department of Transportation (DoT), filed earlier in 2012, the carrier stated it had signed a term sheet for 12 150-seat Boeing 737-400s, with a target to operate eight aircraft during its first year of operations. Seven of the jets would operate in scheduled service while a single aircraft was designated as a spare and for the operation of ad-hoc charters for approximately 50 block hours per week.

Selecting a base of operations in a legacy spoke market

People Express aims to offer low-fares from a base in southeastern Virginia to markets it has determined that are underserved. The carrier is attempting to fill a void left by AirTran in Newport News after the carrier ended service at the airport in Mar-2012 as part of network pruning by its new owner Southwest Airlines, which is the largest carrier at nearby Norfolk International Airport located approximately 29km away. AirTran operated flights to Atlanta, Orlando, Boston and New York LaGuardia from Newport News, and Southwest opted to eliminate those markets after deeming they were overall underperformers. Southwest’s schedule from Norfolk includes service to Chicago Midway, Baltimore, Orlando, Jacksonville and Tampa, Florida, Nashville and Las Vegas.

Both Norfolk and Newport News are essentially spoke cities for the various hubs of US legacy carriers and the larger focus cities of Southwest. Chicago Midway, Las Vegas and Baltimore are Southwest’s top three cities in terms of daily departures while Orlando is the 10th largest.
The top five destinations from Newport News are Charlotte, Atlanta, Philadelphia, Denver and Orlando. Charlotte, Philadelphia and Atlanta are hubs for the airport’s largest airlines by seats, US Airways and Delta. Denver is the main base of Frontier Airlines, which is the third largest carrier from the airport. 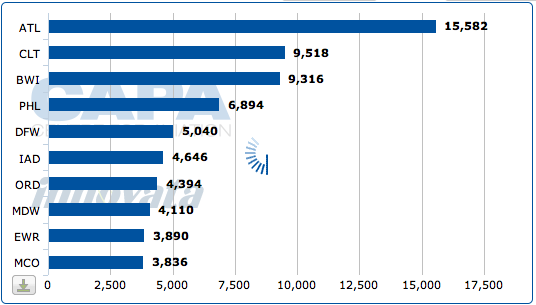 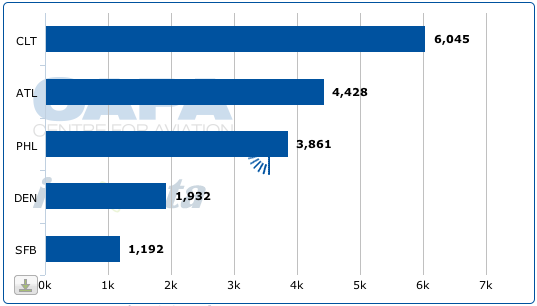 Traffic patterns and trends at Newport News indicate the market is challenging for the point-to-point operations that are the centre of People Express’s business. The airport’s annual traffic numbers fell 2.5% year-over-year in 2009 to one million passengers and grew about 4.3% in 2010. For the first three months of 2012 the airport estimated traffic growth of about 8.7%, but that is largely attributable to Delta placing larger-gauge MD-88s on some routes from the airport and Frontier Airlines launching A320-operated flights from Denver, according to the airport. But current schedules based on Innovata data show Delta operates mostly 50-seat regional jets on flights from Newport News to its Atlanta hub.

The premise of People Express is to offer low-fare direct flights in markets that have either been abandoned or underserved. It plans to have a three-tiered pricing structure, with capacity-controlled deep discount fares that are 60%-70% below current fare levels, a second tier of fares priced at a 40%-50% discount and business fares that are 30%-40% lower than current market fares.

People Express intends to offer that pricing structure as it calculates it will incur USD90 million in expenses during its first year of operation. Those expenses will accompany substantial losses, as is typical of most start-up carriers. Even well-backed start-up airlines are plagued by losses as evidenced by Virgin America, which has not turned an annual profit in its nearly five-year history.

Price still prevails among the cost-conscious travellers the carrier is targeting, and legacy carriers have the resources to undercut the fares offered by People Express. Most travellers will suffer through a connection for lower fares, and legacies will not hesitate to leverage their scale to ensure they retain their lucrative base of connecting passengers.

Management of the new People Express concludes particular opportunities exist in Pittsburgh in the wake of a significant pull-down by US Airways in recent years (Pittsburgh during its heyday had 500 daily departures), and cite a significant increase in ticket prices at the airport. The carrier declares it intends to revitalise air transport options in Pittsburgh through the introduction of flights in the northeastern US and Florida that have no non-stop service or lack sufficient jet competition.

Orlando’s status as a busy tourist destination led the management of People Express to determine that market would also serve as an optimal focus city for destinations in the northeast that currently do not have non-stop service.

It is not clear from People Express that there is any defined timeframe to create focus bases in Pittsburgh or Orlando. Building up two focus cities early in the carrier’s first year of existence will be difficult with its main base and maintenance centre located in Newport News.

US Airways, which is still the largest carrier in Pittsburgh by seat count, pulled down its hub in the city after it concluded its most profitable flying needed to be centred at its major hubs of Charlotte, Phoenix, Philadelphia and its new focus airport of Washington National. The carrier was losing money in the smaller markets it operated from Pittsburgh, and made the decision to downsize its operations. Pittsburgh’s top 10 domestic markets reflect the pattern at both Norfolk and Newport News: they are either major hubs for US legacy carriers, or large bases for the low-fare carriers operating from the airport. 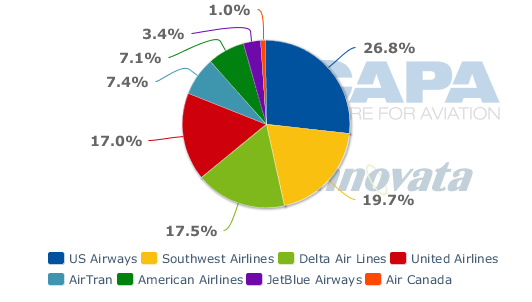 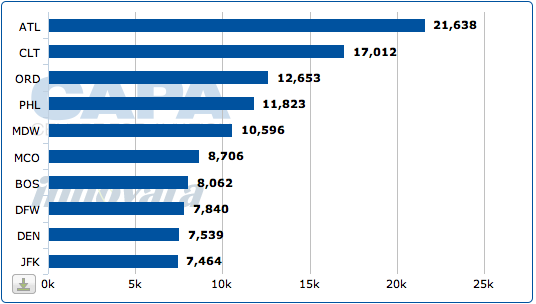 Even in US Airways’ existing markets from Pittsburgh to its three major hubs and New York LaGuardia, Washington National, Boston, Hartford and Raleigh-Durham, a large number of flights are operated with 50- and 70-seat regional jets.

JetBlue has opted to operate 100-seat Embraer E190s on its flights from Pittsburgh to its fast-growing base in Boston and its New York JFK headquarters, reflecting the market size of Pittsburgh. Southwest operates narrowbodies from the airport, but again only to its largest cities: Baltimore, Chicago, Denver, Orlando, Las Vegas and Phoenix. The 737-700s it flies from Pittsburgh have 13 fewer seats than the 150-seat configuration planned by People Express.

The calculus for filling 150-seat aircraft in thinner markets from Pittsburgh is difficult to understand, unless People Express adopts a low-frequency service model similar to Allegiant Air. But the carrier told the DoT that by the end of the first year of operations it intends to operate 36 daily flights to 11 cities.

Orlando has extensive low-fare coverage in the US northeast

Four of Orlando’s top 10 airlines in terms of seat share are LCCs – Southwest, JetBlue, AirTran and Spirit – and those airlines offer a fairly extensive patchwork of flights to the US northeast, the region People Express envisions serving from Orlando. 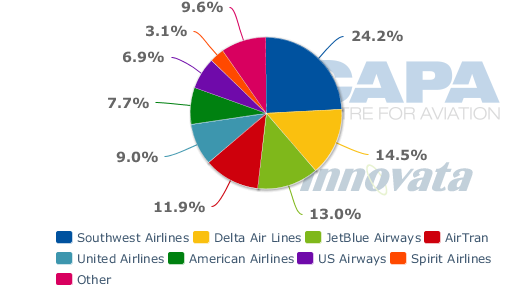 JetBlue’s flights to the US northeast from Orlando include Buffalo, Syracuse and Newburgh, New York; Boston, Massachusetts; Burlington, Vermont; Hartford, Connecticut; and Richmond, Virginia (which is 110km from Newport News).

Spirit Airlines’ main base of operations is Fort Lauderdale, but the airline does serve Atlantic City, New Jersey and Latrobe, Pennsylvania (roughly 64km from Pittsburgh) from Orlando.

AirTran’s routes from Orlando to the northeast include Atlanta, Baltimore and Buffalo. There could be an opportunity for People Express to serve Allentown and Harrisburg, Pennsylvania from Orlando, which are routes being abandoned by AirTran. But Frontier has already moved in on those smaller markets and will have an entrenched presence on the routes by the time People Express reveals its destinations from Orlando.

Columbus, Ohio-based Skybus was the last major start-up in the US that tried to operate a low-fare, point-to-point business model. Armed with USD160 million in financing, the carrier went out of business after a year of operations, owing its woes to high fuel prices and an unstable economy, a similar plight faced by People Express as it works to launch operations.

Skybus also operated new Airbus narrowbodies and charged for luggage and onboard food and drinks. People Express has no plans to charge for food or checked baggage, which will result in the carrier missing out on lucrative ancillary revenue opportunities.

Odds are stacked against most start-ups in the mature US market, and People Express already appears to be on the well-worn path of past start-ups by overestimating the time to achieve regulatory certification. Once the carrier gets off the ground it faces a tough operating environment, flying older aircraft to thin markets where stimulating demand has proven difficult by other airlines.