International Consolidated Airlines Group (IAG) CEO Willie Walsh has provided some insight from the sidelines of the IATA AGM in Singapore into the company’s strategy and the outlook for the industry. A major proponent of industry consolidation, the newly formed holding company has become one of the most-watched players in the industry since Mr Walsh drafted his infamous list of 12 takeover targets.

Despite the commotion surrounding Mr Walsh’s list, the IAG chief conceded in Singapore that any further acquisitions by IAG, which is Europe’s third largest airline company by market capitalisation behind Lufthansa Group and Air France-KLM, have been shelved for the time being. Mr Walsh said IAG is focussed on managing the business and growing organically rather than through acquisitions. No further takeovers are planned, the CEO said, with IAG management focussed on extracting savings and exploiting synergies from the combined British Airways-Iberia.

The current turbulence in the aviation industry, which has hurt airline valuations, and according to Mr Walsh, is likely to result in more collapses, would usually present favourable takeover opportunities. Mr Walsh “fully expects” more airline collapses as a result of sustained high jet fuel prices. He stated European carriers are in more trouble than their counterparts in Asia and North America. "Some [airlines] will suffer more than others, such as those airlines operating in economies that are weaker. The strength of the global economy is driven by Asia and Latin America to a large degree so airlines operating in those areas will be less affected than airlines operating in a European context. It is likely to have more of an impact in Europe than in other parts of the world,” the CEO said.

Mr Walsh stated the only carrier IAG is watching at the moment is Lufthansa subsidiary bmi. He stated he is purely interested in bmi’s portfolio of slots at London Heathrow, where bmi controls the third largest number of slots, with about 5% of Heathrow’s total slots, behind BA and Virgin Atlantic. bmi parent Lufthansa, however, is likely to want to keep bmi in the family, for the same reason Mr Walsh wants to acquire it. “I have said we are interested – it is really a decision for Lufthansa,” Mr Walsh stated at the AGM. 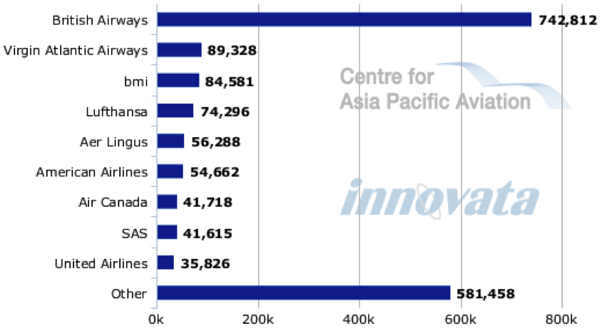 The CEO also played down talk IAG is looking at Portuguese national carrier and Star Alliance member TAP Portugal, in a move that would add enormously to oneworld’s already strong dominance on routes between Latin America and Europe. An IAG takeover of TAP would certainly attract attention from the European Commission, particularly if the yet-to-be-approved combination of LAN and TAM signals an intention to join oneworld. TAP is the only carrier operating between Portugal and Brazil and a dominant carrier between Europe and South America. It uses Lisbon as a transit point for traffic between the regions and codeshares with Star member TAM on the Latin American end of many services. 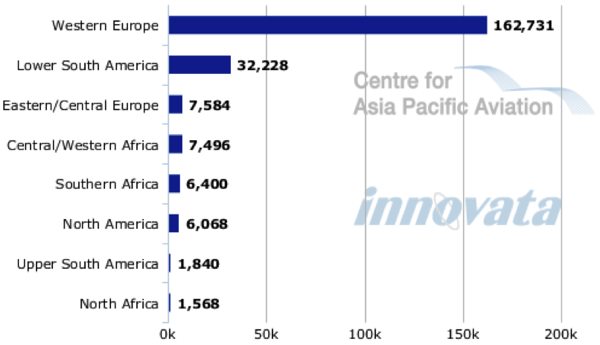 TAP is owned by the Portuguese government, which is currently undergoing a sale of state assets as part of conditions of its bailout by the IMF and EU. The sale, or partial sale, of TAP by the government was considered likely however the government’s recent defeat in a parliamentary election has thrown a cloud over the plans. “We’ll have to wait and see what the new Portuguese government decides to do,” Mr Walsh said, adding that “at the moment there’s nothing happening there.” He said he expects the government to move ahead with TAP’s privatisation.

Mr Walsh also played down reports IAG is looking at JetBlue Airways, another airline in which Lufthansa has a strategic holding. Mr Walsh stated the role of JetBlue in the Lufthansa family, which was originally to provide feed for Lufthansa’s services to and from New York JFK, has largely become redundant following the United-Continental tie-up, which givse Lufthansa a strong feed at Newark.

Mr Walsh also stated IAG is keen to create a joint venture with oneworld partner JAL, similar to its joint venture with American Airlines on trans-Atlantic routes, on services between Europe and Japan. He stated that a JV is preferable to taking an equity stake in JAL, which has recently launched a JV with American Airlines on trans-Pacific routes. Star Alliance rivals Lufthansa and ANA last week received antitrust approval to form a JV, which would be the first such agreement between the two regions. All three alliances have been active in recent months in forming joint ventures between the world’s three major air transport markets – Europe, North Asia and North America - as they seek to increase cooperation and sidestep complex foreign ownership rules.

A oneworld JV between Europe and Japan would put pressure on SkyTeam to also look at closer cooperation, which could involve Europe’s Air France-KLM, Korean Air and/or China Southern and China Eastern. Either way, such moves towards deeper cooperation between major air transport markets is reshaping the competitive landscape, threatening to marginalise those players which do not or unable to participate in the process. 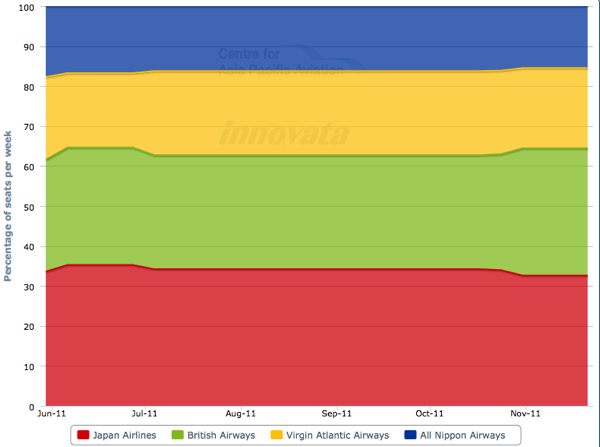 The UK-Japan market has more players than the Germany-Japan market, with the unaligned Virgin Atlantic controlling 21%of the available seats between the UK and Japan. Again, any deeper cooperation between alliance partners on routes Virgin Atlantic serves is likely to attract strong opposition from Virgin. It is currently looking at its options for alliance membership and ownership afters its protests to the BA, Iberia and American Airlines trans-Atlantic tie up fell on deaf ears. 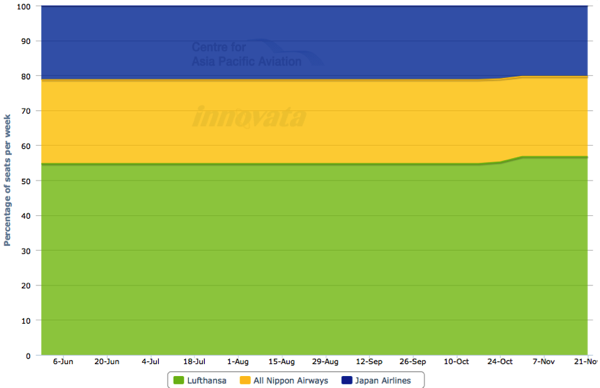 EU ETS likely to lead to a 'trade war'

The European Union’s Emissions Trading Scheme (ETS) has been a hotly debated topic at the 2011 AGM, with the scheme attracting fierce criticism from governments, aviation bodies, airports and airlines around the world. Critique has also come from stakeholders within the EU, which fear the inclusion of the aviation industry in the scheme, which is being unilaterally imposed on carrier’s outside the EU’s jurisdiction and therefore violates international trade laws, will lead to retaliation in the form of trade wars.

Mr Walsh believes the EU should delay the inclusion of non-EU airlines in the EU ETS due to the risk of retaliation from major trading partners in Russia, the US and China. US carriers have launched a legal challenge to their inclusion in the scheme, while Russian and Chinese authorities have expressed their opposition to the scheme. Mr Walsh, recognising the difficulty in tackling a global problem with a regional solution, has urged the EU to implement a regional cap-and-trade scheme, which would see EU carriers charged for regional and domestic services only until a global emissions trading scheme for airlines can be established. “It is clear that the countries are going to retaliate, whether in the form of imposing additional taxes on European airlines or restricting access to markets. The uncertainty will add more cost. It will add more concern in the mind of travellers that they will face disruption to services and I think there is a real risk this could happen," Mr Walsh stated.