Will the US put a tighter leash on oil speculation?

14-Jan-2010 could be an important date in the airline cost battle, with the US Commodity Futures Trading Commission (CFTC) proposing to implement speculative position limits for futures and option contracts in certain energy commodities. The current Commodity Exchange Act gives the CFTC the authority to “establish limits on positions to diminish, eliminate or prevent excessive speculation causing sudden or unreasonable fluctuations in the price of a commodity, or unwarranted changes in the price of a commodity”.

Oil speculation has been cited as much of the cause of the 2008 bubble in oil prices, as well as contributing to the recent USD15 climb over a three-week period, also driven by a spike in Northern Hemisphere demand, due to the harsh weather conditions and better economic conditions.

IATA and airline CEOs called for stricter regulation guiding financial market speculators over much of 2008 and 2009. Lufthansa’s CEO, Wolfgang Mayrhuber, stated in Jun-2009 that "the old rule whereby supply and demand dictated the price of a certain raw material no longer applies". Delta Airlines’ Senior VP and General Counsel, Ben Hirst, argued to the CFTC in Aug-2009 that the increase in volatility has been associated with a "massive increase in speculative investment in oil futures”, which is damaging airline finances and forcing carriers to hedge heavily.

The US Air Transport Association of America (ATA) immediately applauded the proposed rule, which would limit excessive speculation in the oil market by establishing the same oil-speculation position limits that currently apply to agricultural commodities, “while ensuring that bona fide hedge exemptions are not exploited by big banks”.

ATA President and CEO James C May, commented that “reckless oil speculation” is “adversely affecting the nation’s economy and the airlines’ recovery”. Today’s announcement takes an important step to drive excessive speculation out of the marketplace”.

According to IATA, average jet kerosene prices ended 2009 at USD88 per barrel, some 44% higher than the start of the year. It has since edged higher, to USD91.7 per barrel in the first week of Jan-2010.

However, the crack spread (between crude and jet fuel) narrowed to approximately 15%, down from 28% in 2008, as excess capacity grew in refining. Despite improving economic conditions and average fares, higher oil prices and low aircraft utilisation means that rising revenues will not translate immediately into a return to profit for the airlines. 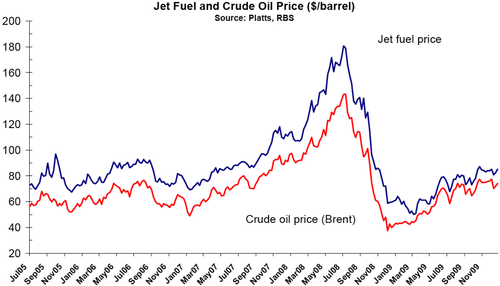 Oil prices for the week to 12-Jan-2009 dropped back towards USD80 per barrel (and has since retreated below this to 77.39 on some disappointing US job and retail figures, as well as unexpected increases in US inventories). From a three month low of USD69 per barrel in mid-Dec-2009, oil prices have climbed 17.6%. 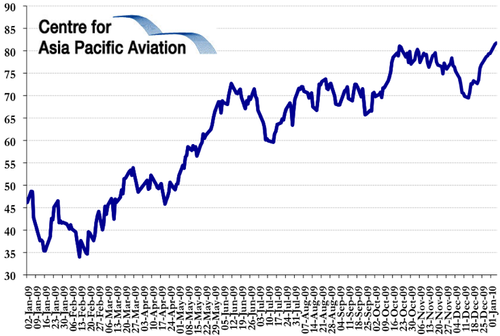 Jet fuel prices dipped over the week, as the crude oil price retreated. Amsterdam-Rotterdam-Antwerp exchange prices fell 3.9%, while Singapore prices were down just 1.1%. Prices at all US markets fell, with New York down 2.3%, the Gulf Cost dropping 2.2% and Los Angeles down 3.3%. 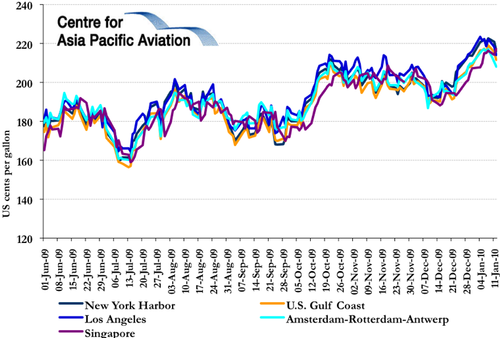