Will an Azul-TAP partnership skew the alliance dynamics in Brazil as Avianca Brazil joins Star?

Brazil’s fourth largest airline Avianca Brazil marks a milestone in Jul-2015 when it formally joins the Star Alliance. With Avianca Brazil finally entering Star the alliance will be able to fill some of the void left by TAM, which jumped to oneworld in 2014 as a result of its 2012 merger with LAN.

But Star has also been courting Brazil’s third largest airline Azul, whose chairman David Neeleman recently prevailed with his partners in acquiring TAP Portugal, a Star member which is also the largest carrier in the Brazil-Europe market. For now Azul does not seem interested in joining a global alliance and is instead focusing on concluding codeshare discussions with JetBlue and United. But eventually Azul could reconsider and give Star two Brazilian members.

Although Brazil is presently enduring economic weakness, Star’s pursuit of two airlines to fill the gap created by TAM’s exodus shows the long-term strategic value of the country, which is by the largest in Latin America. Star clearly sees a need for two Brazilians members in order to fully restore its presence in the Brazilian market.

Star in 2010 initially did not approve Avianca Brazil as a member along with the rest of the Avianca family because of an objection by TAM. But three years later TAM decided to leave Star, leaving an opening for Avianca Brazil.

Star subsequently approved Avianca Brazil as a new member in late 2013. Avianca Brazil completed an IT upgrade in Apr-2014 and was initially expected to formally enter Star in late 2014. But the ascension process was set back as Avianca Brazil requested exclusivity after finding out Star was courting Azul as a potential second Brazilian member.

As CAPA highlighted in Jun-2014: "Avianca Brazil is seeking exclusivity which Star’s members understandably have so far been unwilling to give. Brazil is too big and too important of a market for Star to rely entirely on one relatively small carrier."

Avianca Brazil subsequently gave up its request for exclusivity but continued to refuse to agree to a condition proposed by Star that Avianca relinquishes its rights to vote on any issue concerning the Brazilian market. As CAPA highlighted in Sep-2014: "Avianca sees such a condition as unfair and unprecedented. Until the impasse can be resolved, Avianca Brazil will not continue with the process of joining Star."

Eventually the impasse was resolved. At a 24-Jun-2015 event in Warsaw Star announced that Avianca Brazil had completed the ascension process and will formally join the alliance on 22-Jul-2015. At the event Star confirmed Avianca Brazil did not have exclusivity in Brazil.

CAPA first revealed in Oct-2013 that Star was targeting Azul as part of a new platform for low-cost and hybrid carriers. CAPA reported at the time:

At the recent Star event in Warsaw Star CEO Mark Schwab said the alliance is still in discussions with a potential second member. Mr Schwab recently described the talks to news outlet The Australian Business Traveller as a “watch this space” type of story.

But it seems Azul is unlikely to join Star in the near-term, which perhaps gave Avianca Brazil some comfort in going ahead with the ascension process without exclusivity. Azul president Antonoaldo Neves told CAPA at the 8-Jun-2015 IATA annual general meeting in Miami that reports suggesting Azul is close to joining Star are not accurate. "It’s too much newspaper conversation rather than real stuff," Mr Neves said.

The current focus at Azul is to begin codeshares with Star member United and unaligned carrier JetBlue, which has hubs at Azul's first two US gateways (Fort Lauderdale and Orlando) and Azul's planned third US gateway (New York JFK). Mr Neves said codeshare discussions with both US carriers are ongoing.

Azul and JetBlue have never had a partnership despite having both been founded by Mr Neeleman. While Azul has had an interline arrangement with United for the last year, it is limited to United selling on Azul. "We have the frequent flier/interline right now (with United) but it’s irrelevant. We want to evolve it," Mr Neves said.

Once two-way codeshares are in place with JetBlue and United, Azul will have a platform to potentially add other codeshare partners. But at least for now the strategy is develop a portfolio of partners without joining a global alliance.

The Azul alliance strategy is similar to the strategy at rival Gol, which over the years has forged several codeshare partnerships but has repeatedly rejected overtures from SkyTeam. Even after SkyTeam founding member Delta acquired a stake in Gol in late 2011 Gol has continued to maintain its preference for remaining unaligned and working with a wide array of foreign carriers that serve Brazil.

(Note: a few hours after this report was published United announced a codeshare partnership with Azul and the acquisition of a 5% stake in the Brazilian carrier. Given the Delta-Gol example, the equity stake does not necessarily indicate that Azul is now more likely to join Star.)

If Star is ultimately able to persuade Azul to join it will significantly bolster its presence in the Brazilian domestic market. But Star will still not be able to completely fill the void left by TAM. 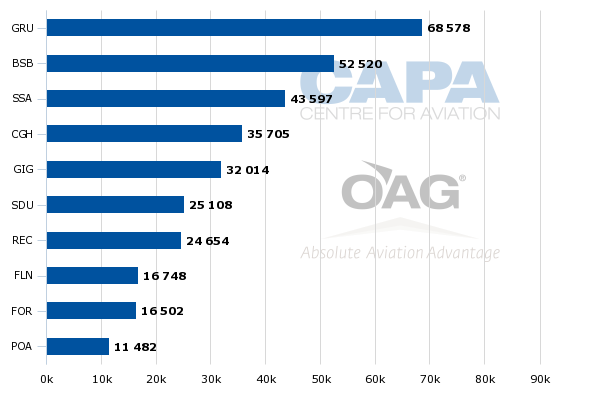 Azul only has bout 11,000 weekly seats at Galeao with most of this capacity on the Galeao-Campinas route. 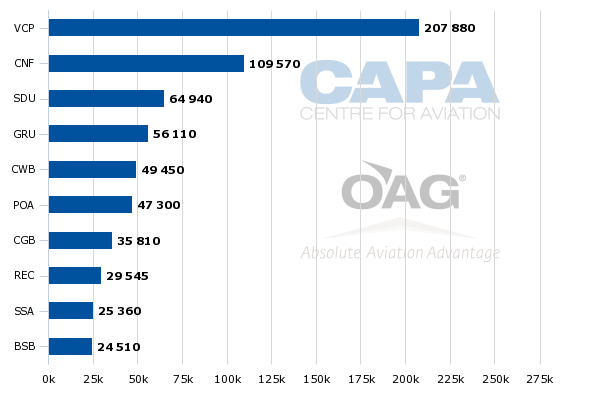 Star currently only accounts for about a 4% share of total seat capacity in Brazil compared to about 33% for oneworld and 3% for SkyTeam, according to CAPA and OAG data. Once Avianca Brazil joins in Jul-2015, Star's share will increase to almost 11%. 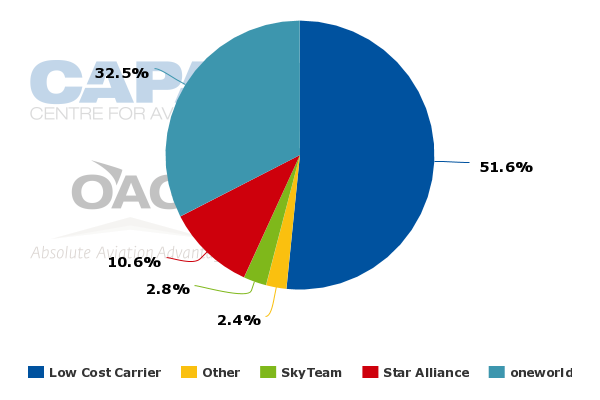 With Azul, Star's share of total seat capacity in the Brazilian market would reach about 28%, putting it only slightly behind oneworld. Adding Azul would clearly put pressure on SkyTeam to finally secure Gol, which would boost SkyTeam's share from a meagre 3% to a market leading 37%. 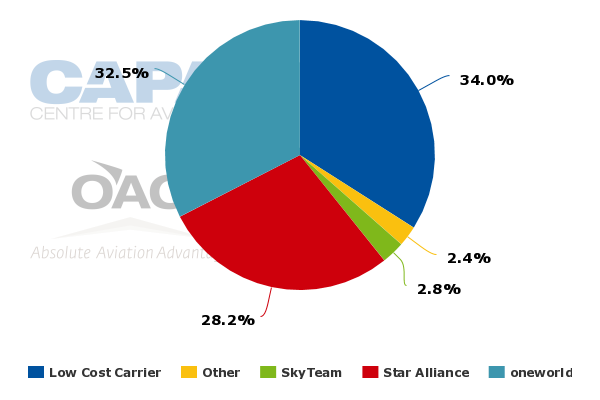 While still small compared to its competitors Avianca Brazil has been the fastest growing Brazilian domestic carrier in recent years, increasing its market share from only 3.1% in 2011 to 8.4% in 2014 (based on RPK data from ANAC). Its market share will likely surpass 10% for the first time within the next year as Avianca Brazil continues to grow much faster than the overall Brazilian domestic market, which has been roughly flat over the last three years.

Avianca Brazil CEO Jose Efromovich stated during the 24-Jun-2015 Star Alliance press conference in Warsaw that the carrier's goal is to consolidate its domestic position with a focus on bulking up frequencies in existing markets. Avianca Brazil typically has had significantly fewer frequencies on domestic trunk routes than its competitors. Additional frequencies should improve connections for Star partners, particularly at Guarulhos and Galeao.

Data from Brazil’s ANAC show Avianca Brazil’s capacity grew 20% year-on-year for the first four months of 2015. Avianca Brail ASKs were also up 23% in 2014.

Mr Efromovich said Avianca Brazil will keep its fleet flat this year but capacity is increasing as its remaining Fokker 100s are being replaced with higher density Fokker 100s. The last batch of the carrier's Fokker 100s are expected to be phased out in Aug-2015, giving Avianca Brazil an all-A320 family fleet with the exception of one A330 freighter.

Mr Efromovich expects Avianca Brazil to carry 8.6 million passengers in 2015 compared to about 7 million in 2014. Avianca Brazil is entirely a domestic carrier with the exception of one weekly flight between Fortaleza and Bogota.

Perhaps the different strategies adopted by Azul and Avianca Brazil could be useful to Star. Azul has some corporate share, but largely caters to leisure travellers that normally travel by bus. Avianca Brazil’s major focus is on business customers.

Avianca Brazil claims it is the only airline within Brazil rated grade A (the highest possible) by Brazilian regulators regarding certain inflight experiences such as seat pitch on all its aircraft. The carrier has an all-economy configuration on all its aircraft but offers the most generous seat pitch in the Brazilian marketplace and provides a full-service product including meals, drinks and in some aircraft seatback IFE monitors.

However, the different market segment each airline offers could also create some product disconnect and Star’s overall goal of creating a seamless customer experience.

Azul and Avianca Brazil are weak in intra-South America, which creates challenges for Star

One strategic element missing for Star in both the Azul and Avianca Brazil networks is a lack of regional international destinations within South America.

As CAPA previously highlighted, Azul at least for now has opted to skip expansion into regional international markets such as Argentina. Its focus is entirely on the domestic market and the US. Azul for now is not planning any international expansion beyond New York, which it plans to launch in Mar-2016 after taking its seventh and final A330-200.

Mr Efromovich said Avianca Brazil is not planning to launch any international routes in the near future. The airline believes that its sister carriers are doing a good job in covering intra South America markets. Avianca currently links Bogota with Sao Paulo and Rio de Janeiro and links Lima with Rio de Janeiro, Sao Paulo and Porto Alegre.

When TAM was a member of Star the alliance was able to market its flights to many secondary markets within South America’s southern cone. As a result most Star carriers serving Guarulhos are generally now lacking feed from markets such as Argentina, Chile, Paraguay and Uruguay.

One wildcard that has just emerged is the successful bid by a group of investors led by Azul chairman David Neeleman dubbed the Gateway Consortium to acquire a 61% stake in TAP Portugal. Synergy was also pursuing TAP.

TAP is the largest airline between Western Europe and Brazil measured by seat deployment, according to data from CAPA and OAG for the week of 22-Jul-2015 to 28-Jul-2015, with a 25% share. TAM is the second largest airline with a 16% share.

Mr Neeleman also stated that while TAP will continue to operate as a separate company he expects to establish an alliance between TAP and Azul. There are huge potential synergies between Azul and TAP. The two carriers have common fleets, fly to several of the same airports and could benefit from a combined sales channel in Brazil.

But Azul sees limited opportunities to feed TAP given that TAP already has such a large Brazilian network, which is expected to grow to a remarkable 20 destinations under the Gateway consortium. "TAP has distributed the European demand all over Brazil. So it’s not concentrated anymore," Mr Neves said.

TAP is already a Star member. Now the question becomes does the Azul-TAP tie-up lead to an acceleration of talks between Azul and Star? Or, conversely, do TAP’s new owners see enough benefit from keeping the airline in the Star Alliance?

The latest partnership chapter in Brazil seems far from complete

There are a lot of changes occurring in the Brazilian market, where domestic demand is still sagging and the country’s two main airlines TAM and Gol are battling soft domestic yields. But the flurry of activity in the partnership sector shows Brazil’s strategic importance both domestically and internationally over the long term.

Airlines are positioning themselves to capitalise on Brazil’s position as the largest market in Latin America. The jockeying seems far from complete.