Who will get ILFC’s aircraft?

Several interested parties are lining up to purchase a portfolio of USD3.5 billion in aircraft from ILFC, as parent company, American Insurance Group (AIC), sells off part of the leasing unit’s USD44 billion, 1,080 aircraft fleet. The sale is another indication of the shakeout going on in the aviation leasing business in the wake of the GFC, with several major players and aircraft portfolios still on the block. 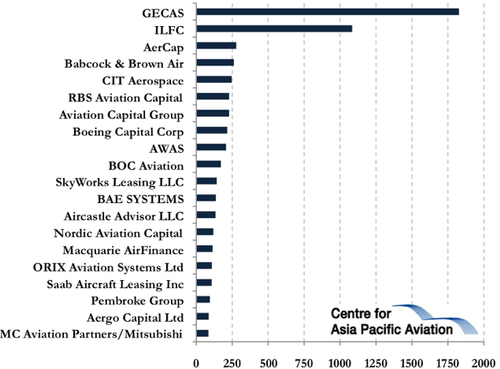 According to a report in today's Australian Financial Review (AFR), Macquarie Aircraft Leasing, a part of the Macquarie Group, and Hong Kong Aviation Company, owned by HNA Group and lease finance specialist, Bravia Capital, have submitted separate bids for some of the aircraft. Hong Kong Aviation Company completed the acquisition of Allco Leasing, and its 60 aircraft, in Jan-2010 and HNA Group has made it known that its ambitions are much broader than just Allco’s portfolio. Macquarie acquired USD1.5 billion in assets from GATX Corporation in 2006.

Also reportedly interested in acquiring the aircraft are Bank of China unit, BoC Aviation (formed following the acquisition of Singapore Aircraft Leasing Enterprise), and Terra Firma Capital Partners, which purchased AWAS in Mar-2006 and Pegasus Aircraft Finance Company in June of the same year. The AFR also indicated that other private equity firms have been rumoured to be showing interest.

Despite nearly two years of trying, AIG was unable to find a buyer for ILFC, which is saddled with a high debt load (reportedly USD30 billion) and a massive order book of next generation aircraft such as 74 B787s, 20 A350s and ten A380s. The unit was to have been sold to help repay the USD182.3 billion US Government bail-out handed to AIG in 2008, of which more than USD120 billion was still outstanding, as of Oct-2009. AIG was reportedly unwilling to sell the unit at a major discount to its book value and will instead restructure it.

An attempt by founder of the company and then CEO, Steven Udvar-Hazy, to hive-off a section of the company’s portfolio (reportedly up to 200 aircraft) was unsuccessful. Mr Udvar-Hazy left ILFC in Feb-2010, to start afresh with a new aircraft leasing company.

ILFC’s outlook has been damaged by continued downgrades by US ratings agencies to junk status, with Fitch Ratings stating it believes ILFC is “no longer viewed as a core part of AIG's overall franchise”, and AIG's long-term willingness to extend support to ILFC “may be more limited than previously assumed.”

In the short term, AIG is continuing to service ILFC’s debt, announcing a new senior secured term loan of up to USD750 million, backed by its aircraft inventory, in late Feb-2010. Last week, it added another USD550 million term loan to the offer, taking the total to USD1.3 billion.

Also up for sale is RBS Aviation Capital. In late 2009, the company appointed Goldman Sachs to evaluate a sale of the leasing unit.

The leasing market is dominated by GECAS and ILFC, but there is a new second tier of lessors emerging, with the smaller players looking to expand rapidly through acquisitions. When the merger of AerCap and Genesis Lease goes through, expected during 1H2010, AerCap will control almost 360 aircraft, leapfrogging it to third place, according to Ascend data.

A USD3.5 billion asset acquisition by Macquarie, Hong Kong Aviation or Terra Firma would also massively expand their fleets, and narrow the gap to the current giants in the market.

In trading on Monday, lessors shares were generally lower, with Babcock & Brown Air down 1.7%, AerCap and Genesis Lease lost 1.4% and AirPartner slipped 0.6%. Aerocentury went against the trend, rising 5.7%, continuing its strong gains since a favourable full-year result reported in early Mar-2010. 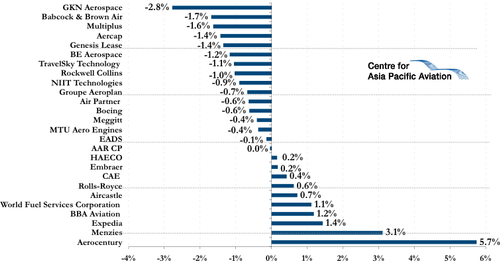