What makes the ideal airline CEO? Do CAPA’s World Aviation Summit delegates agree with the experts?

At CAPA’s World Aviation Summit in Amsterdam in Nov-2013, delegates were asked what they considered to be the key characteristics that an airline CEO should possess. Included in the responses were words such as vision, decision-maker, innovative, charismatic, leadership, communications, focus, passion, adaptability, discipline, entrepreneur. Delegates were also asked to nominate who they considered to be the best airline CEO ever.

In the fiercely competitive airline market place, the airline CEO needs an almost impossibly broad range of skills. Is it reasonable to expect to find all these qualities in one person? How important are the other executives and the board of directors to a CEO? A panel session at the Summit, led by CAPA Executive Chairman Peter Harbison, discussed these and a range of other issues that touch on what makes the ideal airline CEO. Who were the panellists’ nominations for best airline CEO and did Summit delegates share their views?

A wide spectrum of skills is essential

Nicolas Boutin, partner and managing director at The Boston Consulting Group, highlights the challenge faced by CEOs in needing to combine skills from the two different ends of the spectrum. “They need to be tough and also inclusive and a communicator”, he says. For Mr Boutin, legacy airline CEOs must be determined and single minded, while simultaneously being inspirational and motivational.

Con Korfiatis, aviation partner at search firm Heidrick & Struggles, stresses the need for a fully rounded executive with all the functional competencies. A good CEO must have more than this, however. When seeking a CEO appointment, Mr Korfiatis also focuses “on the person themselves, what they are like as an individual”. There must be a cultural fit, a CEO must be a “change agent” and have team skills. In his view, an airline CEO does not necessarily need to come from the airline industry.

Willie Walsh, CEO of IAG and the only panellist actually running an airline company, agrees that it is not necessary to come from the industry itself. He adds a further point, drawn from his own experience. “The qualities needed to become a CEO and the qualities that make a good CEO are not necessarily the same,” he says.

According to Mr Walsh, his first CEO appointment, at Aer Lingus, came about because “no one else would do it. I was in the right place at the right time.” He recalls a director of the company asking him if he was sure he really wanted the job. “He said ‘if you get this wrong, you’ll go down in history as the guy who bankrupted Aer Lingus,” says Mr Walsh, “‘Get it right and everyone will take the credit’”.

Andrew Herdman, director general of the Association of Asia Pacific Airlines, highlights that start-up businesses often need different qualities from those required by larger airlines, a point also developed by Mr Walsh. “The people you need to start an organisation are not always the same as [you need] to take it to the next level,” he says.

The importance of a good team…

Mr Herdman contrasts the different traditions of business in the West with those in Asia. “The Western approach [sees] the CEO as everything,” he says, “and the media seize on that more than different strategies. No one person has it all and the rest of the management team fills it out. [For example], a visionary marketing leader may have a quiet colleague that’s good at day to day operations”. In Asia, he says that there is less pressure for the CEO to be in the public eye.

He also sees a need for a CEO to be able to manage the political dimension of the airline business. “Government policy is everywhere,” he says, “… [CEOs receive] weekly phone calls from the cabinet about what to do.” The life expectancy of airline CEOs in the Asia Pacific region is only two to three years, according to Mr Herdman and a CEO needs a “deep team”. He adds: “The best organisations can survive the absence of their leader”.

The panellists all agree on the need for a CEO to have a strong team, with executives from a range of backgrounds. “Individuals going off on their own without support often fail. A team is vital,” says Mr Walsh.

…but someone needs to make the big calls

Although he stresses the importance of a good team, Mr Walsh believes that it is then down to the CEO to “get the most out of what is there”. This is not always straightforward. “Determination is key,” he says, “Determination to get things done in the face of challenges, both internal and external.” He suggests that his training as a pilot helped. “You need to make decisions quickly and move on.”

This brings into focus the importance of making good appointments, a theme developed by the IAG CEO. “You don’t recruit people exactly like you,” he says, “but you recruit people you can work with. You need to put time and effort into selecting people.”

Nevertheless, even with a good team in place, “analysis [only] gets you so far”, says Mr Herdman, “Someone needs to decide and co-ordinate. You need someone to make the big calls.” This falls to the CEO. “It’s all about making it work,” agrees Mr Walsh, “No one goes back and says ‘can I see all the options you didn’t choose?’”. 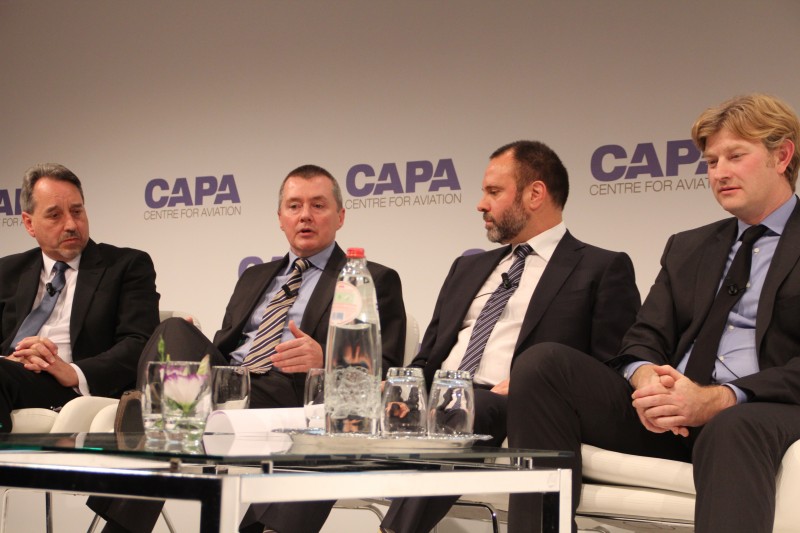 How to develop the potential of female managers

In response to a question from the floor, the discussion widens to address the issue of how to make the most of the potential of female managers. Mr Walsh is clear in his view. “Having good people is what is important,” he says, “… focus on the person regardless of age, race, or gender.”

Mr Walsh believes that easyJet CEO Carolyn McCall is “one of the best in the business” and that the existence of female CEOs is a positive in pointing the way for other women executives, although they remain relatively rare in the airline industry. CityJet’s Christine Ourmières is another example.

“The idea that there are things women can’t do is a nonsense”, says Mr Walsh. He also argues that is important to have “a diversity policy we act on”, including a campaign in British Airways to encourage more women to become pilots and the appointment of more female directors to the IAG board.

The role of the board of directors

The part played by board of directors more widely in setting the tone and in shaping an airline’s business is another topic tackled by the panel. “Boards need a more diversified set of skills and backgrounds,” says Mr Boutin, “the short term results focus is an enormous pressure.”

Mr Walsh sees the relationships between the chairman and the CEO and between the chairman and the board as particularly important. He also argues that good non-executive directors are essential in enhancing the quality of the business and that board experience is an asset for company executives. “We encourage executives to take non-executive roles [elsewhere]”, he says.

Mr Herdman sums up the crucial role played by boards. “They get [the airline] through transitions, manage the political dimension and sign off on the big decisions,” he says.

A retailer as an airline CEO?

Airlines are increasingly complex organisations, embracing many different business activities under one roof. It has already been suggested that an airline CEO does not necessarily need to come from an airline industry background, a point that is not really disputed among the panellists. But, as airlines increasingly attempt to develop a more retail-like approach to selling, should they recruit retailers as CEOs?

Again, Mr Walsh is clear in his view. “There are great retailers out there, for example Burberry”, he says, “but it doesn’t sell bread or milk, it sells its core product. Airlines need to work out what is core and be very good at it. Recruiting a CEO who is a retailer is the wrong way to go. You can’t sell everything to everyone.”

Who are the panellists’ favourite airline CEOs?

The AAPA’s Mr Herdman says that he worked for “a lot of CEOs, some good ones” at Cathay Pacific. He nominates Peter Sutch as a “key leader” and also mentions former Singapore Airlines CEO Dr Cheong Choong Kong for his vision.

IAG’s Mr Walsh mentions fellow Irishman Michael O’Leary, CEO of Ryanair, for “what he’s achieved”. Although Mr O’Leary has what Mr Walsh describes as a “strong personality”, Ryanair has a “strong team” and is “a well managed company”. Mr Walsh also mentions easyJet's Carolyn McCall, who is “doing a great job”. However, his favourite airline CEO is Akbar Al Baker of Qatar Airways “for building from nothing in 1997 to a five star airline today”.

Mr Korfiatis identifies a common theme among the CEOs mentioned as being “people who stood the test of time” and, in that vein, he nominates Herb Kelleher, co-founder and former CEO of Southwest Airlines. He also cites Lion Air’s Rusdi Kirani.

Mr Boutin mentions Emirates’ Tim Clark and IAG’s Willie Walsh, before naming has choice of favourite as Alexandre de Juniac of Air France-KLM. “He’s not an airline guy, but he’s doing restructuring in a difficult context and also trying to keep motivation and a focus on the customer”, he says.

The last word goes to the survey of Summit delegates, who were asked to give the name of their own favourite airline CEO. The name with the highest number of nominations was that of Ryanair’s Michael O’Leary.

Whether he ticks all the boxes for the "ideal" airline CEO is a question for another day. There certainly aren't many like him. But perhaps in view of these responses he should delay his plans to become fuzzy and cuddly....